Don DiLego Drives It Home with “Magnificent Ram A”

Don DiLego is quickly becoming the “Next Big Thing,” in the Americana-Indie-Folk scene.  On the cusp of releasing his latest endeavor, Magnificent Ram A this July, DiLego takes a unique approach at the genre, creating songs that fit together with ease. His eclectic style is both captivating and charming as it brings to life his songwriting and lyricism skills.

Currently sharing two pieces of work from the record, “Drive Like Pirates,” and “The Pharmicist in the Aquarium,” each song helps us to dive deeper into the musical world of Don DiLego. The pieces from Magnificent Ram A are equally captivating and ambitious, and is perhaps his best work to date. Creating albums since 2001, we see a slightly different side of Don in the current day, as he has perfected his craft of becoming a musical main stay.

Recently we had the chance to catch up with Don DiLego, to talk about the upcoming record and what drives him in the music realm. Here we go…

What comes first when writing, the music or the lyrics? Why so?

I’d say for me, 95% of the time it’s the music. That in no way means it’s the right way, it’s just my way. I often wish it were the other way around, but it doesn’t seem to come to me like that. Usually I’ll see an arrangement full to the end, until it feels like a song, then I’ll sit and pull my hair out to find the words that feel right. If I’m lucky, which is rare, it’ll come out quickly. Usually it’s a battle. The older I get, the more important the words have become.

Magnificent Ram A is a record I gravitated towards immediately upon hearing. What is the theme and concept behind the record?

Thanks. I’ve always tried to have some sort of concept to guide me through every record I’ve done. Makes for a nice beacon when I feel I’m losing focus or inspiration to finish what I started. In this case, I had two things to work with. A good friend of mine and GREAT writer, Josh Cagan, had sent me and a friend a children’s story that we thought would make for a great musical. So one night in my studio I stayed up and wrote this crazy “opening number” called “Karma King.” It was so different from anything I’d done because I wasn’t trying to write a proper song in any way. But it ended up defining what I wanted the rest of the record to sound like. I immediately made a bunch of album rules like “no acoustic guitars unless tuned to low open C”, and “no bass!” I caved on the latter, but there are still a few on the record with no bass. The album title came to me after a visit to the Museum of Natural History in NY. There was some taxidermy rams on display and one titled, “The Magnificent Ram.” One of them was set far apart and alone, and I just started to fill in this backstory of the ancient ostracized ram. Magnificent Ram A. It made sense at the time!

Do you have plans to tour the U.S. anytime this year?

Absolutely. We have a bunch of dates in Europe that coincide with the album’s release and then we head back to the US for some in the late summer and fall. It’s been a while so I can’t wait.

Your voice is perhaps one of the best, most heartfelt I have heard in a longtime. Have you ever had any professional vocal training?

Did I mention that I love No Depression?? Ha. Again, that’s a huge compliment. No vocal training. I am actually quite abusive of my voice. I never warm up or down and somehow it’s managed to be resilient. I should definitely stop taking that for granted though. I think that to this day I am very opinionated and insecure about my own voice. I wish I could claim differently, but I’d be lying. I’m constantly comparing it to others that I admire and are inspired by, and that’s a slippery slope. I’m well aware that it’s pointless for any of us to compare ourselves to others, because we are us and they are them…so to speak. But you’re sitting in a theater watching Jeff Tweedy sing “How to Fight Loneliness” and it’s hard not to be intimidated by that. I just try and remind myself that noone could sing my songs as well as I do, and hope that Tweedy never covers one of them and causes me a panic attack. Although, I would like to hear Willie Nelson give a try…

What kind of guitars do you use on the new record?

This may be the only time I’ll ever be asked this! I’m so not a “guitar player” in the traditional sense. But I’m proud to say that even though I’ve been doing this a long time, I’m still pushing to become one. I always prefer semi-hollow electrics with flat-wound strings. I have a Gibson 335 and Epiphone Sheraton with a Bigsby that carry the heavy lifting. And like I said, where there are acoustics, they were mostly open tuned to C, with sometimes a capo. I have a penchant for old, sad, abandoned guitars. Hence my collection of Silvertones.

What is the inspiration behind the new single, “Drive Like Pirates”?

It started with the open tuned acoustic. I had this slide-down run that I kept looping around while stomping on the ground. It pretty much sounded great just like that so that whole song was recorded in a few hours with me and a friend playing the guitar and recording us stomping and clapping in the studio. I always heard it as an over-the-top harmony sing-a-long. It was only a matter of time before I HAD to add the horn section. Obviously. We had a lot of fun with that one. They don’t always come that easy and I appreciate them as a gift.

With elements of Indie, Folk and a dash of Americana, how do you combine those elements to craft your own, unique sound?

It’s not really that conscious, and I’m guessing most non-pop artists would say the same. I just know what instruments I like and pretty much throw them into every song. There are certain guitar tones that don’t appeal to me, so they never color what I do. I definitely hear other bands or songwriters who do things I wish I were doing. Band of Horses is a good example. But they are so, Band of Horses. They’re just doing what they do because of who they are. I’ll tell you what though, there are genius exceptions. Jim James is one. Every record is different AND astonishing. He’s just successful at whatever sound he’s going for. I’m totally envious. But the thing I remind myself is, you never hear the process, just the result. Everyone drools over a new Radiohead song, but maybe the work in process demo sounded like barking giraffes. I’m just saying.

How did you team up with Jesse Malin to record, and to venture on tour with?

Jesse is a guy I had been a fan of on his first album. We shared some musicians in the scene, and it was probably an eventuality that we’d have a show together at some point. We started chatting about making music, and my studio, and next thing you know we’re doing some writing and recording. The man doesn’t have much of an ego. He’s really open to exposing himself to the process I was just discussing. I’m not. I admire that about him and have learned a lot.

Where do you see Don DiLego as a musician, 10 years from now?

Soloing on “While My Guitar Gently Weeps” at the Rock-n-Roll Hall of Fame while everyone says, “Greatest solo ever!” Either that, or I’ll take that I’m still releasing records and people are still listening. I can be overly-realistic to a fault. But honestly, keeping people interested is NOT that easy. Especially when you don’t wear purple. 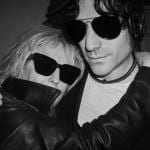 The Sun Will Rise: Jesse Malin on His Friendship with Lucinda Williams