In 2017, Hazel Dickens and Alice Gerrard were inducted into the International Bluegrass Music Association (IBMA) Hall of Fame. With the exception of women who were part of a band, and usually a family band, e.g., the famous Carter Family, who were inducted in 2001, only one other woman — Louise Scruggs in 2010 — has received solo recognition by the hall of fame organizers since 1991. Let’s face it. Bluegrass has been a good old boys genre since Bill Monroe picked up a mandolin and Louise’s husband Earl Scruggs met Lester Flatt. But as Bob Dylan once wrote, “the times they are a changin.’”

Fast forward to 2016, when Sierra Hull and Becky Buller became the first women to win Instrumental Performers of the Year awards for mandolin and fiddle, respectively. Hull came out on top in the same category in 2017, and Molly Tuttle, who appears poised to be among the next female superstars of bluegrass, won Instrumental Performer of the Year for her guitar picking prowess — the first woman to ever top that particular chart.

And while IBMA organizers had a fascinating tribute to the women of bluegrass exhibit during the 2017 event, I think it’s safe to say that 2018 may just be the year of the woman at this year’s awards show, set for Thursday, Sept. 27, at the Duke Energy Performing Arts Center.

All eyes will be on Buller and Tuttle.

Despite the name Crêpe Paper Heart, released by Dark Shadow Recording, there’s nothing flimsy about this album that features new songs from the pen of Buller and her co-writers, performed by past and present members of her ridiculously talented road band, along with an award-winning line-up of industry heavyweights, including Grammy and IBMA award winners Rhonda Vincent, Sam Bush, The Fairfield Four, Rob Ickes, and more.

“It wasn’t supposed to take this long,” said Buller, alluding to the four years lapsed since her DSR debut recording, Tween Earth And Sky, in a press release. “But so much good life got in our way, and I’m glad we took our time rather than rushing just to get something out,” she says. “This album completely changed in character from what we originally planned: We leaned more heavily on my road band; we were able to connect with The Fairfield Four and other special guests. I’m so proud of it.”

Buller made bluegrass music history in 2016 by becoming the first person ever to win in both instrumental and vocal categories at the IBMA awards. She also won Bluegrass Songwriter of the Year (2016) and Emerging Artist of the Year (2015). Based on the strengths of her latest album and all of her previous awards, it should come as no surprise Buller leads this year’s IBMA awards field with a whopping eight nominations.

Last year, Rhiannon Giddens, another female bluegrass trailblazer, in her keynote speech to IBMA conference members called for music to tear down the artificial division between people who have been making music together for hundreds of years. As the second woman in two years to give the keynote and the first person of color, she knows a little something about that divide.

Buller recognizes there has been a not-so-subtle shift in the bluegrass world over the past few years.

“All along the way there have been strong women in bluegrass, and really I am so in awe,” Buller said in a phone interview from her home in Manchester, Tennessee, home of the now famous (or is it infamous?) annual Bonnaroo Music and Arts Festival.

Buller admits she hasn’t had the opportunity to play the musical mecca “proper,” but she and her band have performed in the “Jesus” tent at an informal church service held Sunday.

“There’s definitely a changing of the tide and a lot more women are being recognized. There’s a lot of new blood and it’s just an honor for me to be a part of it.”

In order for music to grow and thrive, Buller says more young people need to feel invested. “We have to have that for the music to continue.”

And while the internet, and Facebook Live and YouTube, make it easier for artists to get out in front of audiences today, Buller said it’s getting harder and harder to break through the noise. “It seems like you have to be on Instagram several times a day and on Facebook at least once a day and after my 5-year-old daughter goes to bed, I’m on Twitter.

“I vividly remember walking around the hallways in high school singing Rhonda Vincent and Claire Lynch songs knowing that it wasn’t cool but that someday it would be OK. Claire Lynch was in my house writing songs recently and it was awesome. And my producer asked Rhonda to record one of my songs a long time ago, ‘Fishers of Men.’ I am standing on their shoulders.”

“I love the collaboration with Raleigh. It’s grown more than anyone imagined. It’s outreach for bluegrass music is making a huge impact. Nashville didn’t have the vision. The move was good for the music good, good for IBMA, and good for Raleigh.” 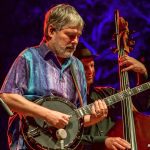 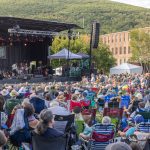