It was fitting that John Darnielle choose the track Love, Love, Love, from his 2005 album The Sunset Tree to start this first gig in a short UK tour as a Mountain Goats duo with long time bassist Peter Hughes, writes Neonfiller.com‘s Joe Lepper.

From the gallery of this full and magnificent Georgian church venue to the pews beneath, the faces of the 350 or so people in attendance were full of love for Darnielle and his music, which has been part of many of their lives for the last decade or more.

But its not just the songs, with their common themes of self-reliance and overcoming fears, that bring such adoration. Love is also directed at  his and Hughes’s personalities and stage prescence. There were smiles and laughter aplenty as the transfixed audience heard insights into the song writing process and comic tales of performing to just one person in a German venue “as indie was going out and everyone was suddenly into electro music.”

As a duo, due to other commitments of their drummer Jon Wurster, the set was perfectly tailored for a mostly acoustic guitar and bass arrangement, with the black suited and long haired Darnielle switching to the imposing grand piano in the centre of the stage for five tracks in the middle.

It was this piano segment that was the most suited to the venue, with Eziekiel 7 sand the Permanent Efficacy of Grace, from 2009’ The Life of the World To Come a highlight. This tender haunting song about torture in the desert is among his most powerful tracks and even better live. The audience too played their part, with Darnielle and Hughes impressed with their perfectly timed applause just at the end of those magical mili-seconds as the sustain of the piano keys drifted away. 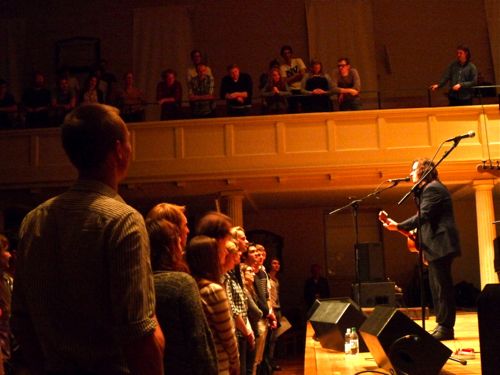 The first gig in this tour meant there were a couple of loose moments, Hughes and Darnielle out of time a couple of times, a forgotten chord here and there, but it didn’t matter. It was all part of the experience as Darnielle and Hughes made this large venue in the heart of Bristol seem like we were sitting around our living room having a chat and a singalong.

Another welcome aspect of this tour was that it wasn’t to promote a specific album. Their last album was 2012’s Transcendental Youth, with most of its songs ill suited to a duo arrangement due to their beautiful horn arrangements by Matthew E White. This made it more of a career retrospective with a chance to play less well known tracks such as Cheshire County, from the 1995 EP Nine Black Poppies as well as the title track from 2008’s Heretic Pride, part of The Mountain Goats successful stint with the label 4AD.

The set ended with a rousing version of Furniture Store, a cover of a song originally by their friend Joel’s band Furniture Huschle, with the crowd standing up and joining in throughout.

Earlier on a member of the audience shouted out “John, it’s been four songs in and you haven’t mentioned Satan yet.” Darnielle laughed as he knew that the opportunity to sing of “the dark Lord” would be too big a chance to turn down as the giant image of Jesus looked down on the stage from behind him in this former church. 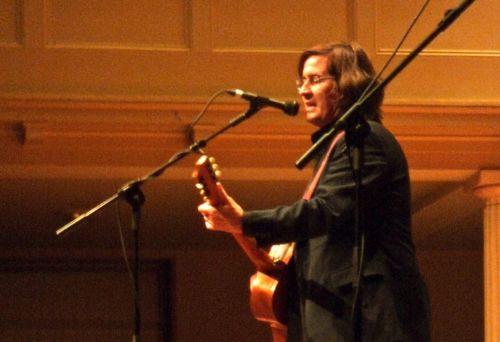 It was the encore where that particular fan and the rest of us, who were still standing, were treated to the appearance of Satan. First with No Children, the Tallahassee track about a loathsome, devilish couple that is surely in most Mountain Goats fans top ten trackslist. Then the gig ended as we had all hoped, with The Best Ever Death Metal Band in Denton. This tale of two teenagers separated through an archaic attitude to mental health and human expression with its finale singalong of ‘Hail Satan” was just about the only track that could have ended this gig.

Darnielle informs us that he doesn’t plan what to say between songs “and bands that do are the worst people on the planet.” He may not plan his banter but he certainly knows how to use it well as well as plan a setlist for a massive church. As he left stage a fan in the front handed him a sketch. Darnielle hugged him warmly then later praised him on Twitter. Love, Love, Love indeed.

You or Your Memory

In memory of Satan

Ezekiel 7 and the permanent efficacy of grace

ENCORE – No children, Best ever death metal band out of Denton