The Dreaming Spires’ list of influences doesn’t differ dramatically from that of other aspiring Americana artists in the UK. The Byrds, the Burrito Brothers, and other purveyors of Southern California’s sun-dappled 1960s-’70s sound radiate from this band’s two releases – 2012’s Brothers in Brooklyn and their latest, this year’s Searching for the Supertruth.

“California is always on my mind,” they coo on the aptly named “Easy Rider,” a track taken from their sophomore set. It’s no surprise, really; brothers Robin and Joseph Bennett served their apprenticeship with two bands known for their California dreaming – Goldrush and Danny and the Champions of the World – while also having occasion to record with Gary Louris of the Jayhawks, Garth Hudson, Mark Garner of the Ride, Mercury Rev, and Saint Etienne. Along with current drummer Jamie Dawson, the group creates a sweeping sound that veers from the introspective to the anthemic while covering various bases in between.

The genesis of the Dreaming Spires came about in a late 1990s band called Whispering Bob, which received attention from John Peel and Bob Harris. However, their initial influences go back much further.

“Our dad was a big Beatles fan so we listened to them a lot as kids,” Joe notes. “I knew the words to the whole of Sgt. Pepper by the age of six. When I began to discover music for myself as a 13-year-old, I got into REM, starting with Automatic for the People and working my way back rapidly to Murmur and Green. As a teenager, living in Oxford at that time, you couldn’t not be influenced by Supergrass and Radiohead. I learned to play bass listening to I Should Coco and In It for the Money. And then at 17, I stumbled upon The Band. The way their three voices blend is so ragged and yet so beautiful, and Rick Danko’s bass-playing style made a big impression on me. ‘King Harvest (Has Surely Come)’ is just one of the greatest grooves out there.”

Robin concurs. “That Beatles movie Backbeat came out when I was 15 and sent me back to some of the source material – Sun-period Elvis, Chuck Berry, Little Richard. I remember Nirvana’s MTV Unplugged opened my eyes to a more rootsy sound around the same time, and from reading interviews with the Lemonheads, I started to be curious about Gram Parsons. That may have been my gateway to Americana. I also found a box of old records containing Harvest, CSN&Y and some others that changed the course of my listening.”

Searching for the Supertruth lives up to its title, given the meditative nature of several of its songs, the beautiful, caressing “We Used to Have Parties” in particular. “There’s a few narrative threads running through, relating to our travels around the US and experiences with a dear friend of ours,” Joe explains. “Plus, it’s our quest for a greater meaning in life and our place in the universe. You know, lowbrow stuff.”

So far things have been going well for the band, giving the Dreaming Spires reason to be optimistic about the future. They recently completed a visit to the States that allowed them to perform at the Americana Music Conference in Nashville and to record some new material at Ardent Studios in Memphis.

“There’s always more you can do,” Robin maintains. “But we try to enjoy the view along the way, and keep doing music that pleases our own ears first. When we write a good song or we make a good recording, we want people to hear it!”

Asked about their goals for the future, Robin is fairly succinct: “To keep writing better songs and avoid getting a ‘proper’ job.” 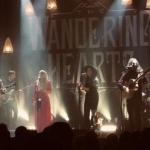 The Wandering Hearts and Ruston Kelly in London 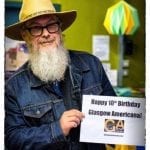