The Crow’s Nest at Kerrville (and Song Circle Etiquette)

After spending the last two weekends at the Kerrville Folk Festival, with one more weekend there to go, I feel compelled to tell you more tales of the storied affair. You may already be familiar with the 18-day singer-songwriter event in the Texas hill country. Drive windy highway 290 west, past Austin. Go eight miles past the town of Kerrville, almost to Medina, and nestled in a small valley is the Quiet Valley Ranch. QVR is an RV park, which also happens to be home to one of the greatest festivals I have so far witnessed. Run in large part by a strong volunteer crew, hippies from all over have been going for almost 43 years. You better believe they have some elaborate living situations happening.

To that end, the Kerrville Folk Festival has many neighborhoods. Like a pop-up village, you can wander your way through the grounds and find any manner of music and food that your heart desires. It’s full of small but sturdy settlements such as Camp Cuisine, Sweetness & Light, Sudden Creek, Camp Coho, and more. The Rouse Camp, hosted by Lindsey Lee, his wife Deb Rouse, and her mother Liz Rouse, generously takes care of all 32 of the New Folk Contest finalists. They provide tents, food, libations, and a large shade structure for late night song circles. For many a young songwriter contest entrant, this camp is a home away from home at an exciting and scary moment.

Up on the top of the hill, just below Whiskey Ridge, is the Crow’s Nest. It might look like a fire pit surrounded by a VW bus and a truck or two, but this is the spot. Many of the finest songs you’ve never heard have been sung here, swirled amongst the wood smoke, and sent up to the constellations. I have spent many long nights sitting on a tree stump there and singing along.

Song circles have a few rules of etiquette: Only one song per person, per round. Stay a while. Don’t sit down, play your song, and then get up and leave – listen to each song! Open your ears and hear each song as a beautiful and unique moment. If you are going to play along, don’t drown out the singer. Lyrics and melody must be audible. A lot of songwriters have adopted the acronym “SOTF” or “song on the floor.” Both terms are a gentle reminder to shut up and listen. The phrase as coined by the late and venerable Jack Hardy, who, while a staunch denizen of Camp Coho, is frequently lamented and toasted to on the Ranch.

Jack, you do live on, sir. As do many songwriters whose voices were heard by the stars, followed by the morning sun, up at Crow’s Nest.

It’s not too late to get out to Fest. See you there! 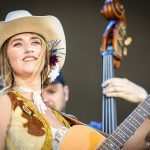 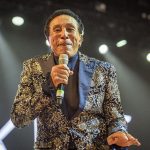 THROUGH THE LENS: Stagecoach and Moon Crush Show Festival Season in Full Bloom