I wrote this — and meant to post this, back around Halloween 2009.  I’d forgotten about it for all this time, until I went to edit my most recent blog post and saw it there.

So what the hell, here’s more than you wanted to know about the song “Ghost Riders”

A version of this was published in The Santa Fe New Mexican
October 30, 2009

An impressionable 12-year-old rode to the top of an Arizona hill one afternoon with an old Cowboy friend to check a windmill. A big storm was building and they needed to lock the blades down before the wind hit. When finished, they paused to watch the clouds darken and spread across the sky. As lightning flashed, the Cowboy told the boy to watch closely and he would see the devil’s herd, their eyes red and hooves flashing, stampede ahead of phantom horsemen. The Cowboy warned the youth that if he didn’t watch himself, he would someday be up there with them, chasing steers for all eternity.

Sixty years ago this frightening vision, now found on the Western Music Association Web site, was etched into the consciousness of America. “Ghost Riders in the Sky” is a perfect Halloween song for the West. It’s the only cowboy song in which “yippie-yi-yay” becomes a demonic taunt. The boy who heard the tall tale from the old cowpoke would grow up to be forest ranger/songwriter Stan Jones.

“Ghost Riders” became a huge hit in 1949, a year after Jones wrote it. Pop-folkie Burl Ives was the first to record it that year. Frank Sinatra, Bing Crosby, and Peggy Lee chased the devil’s herd, too, and before the end of the year, avant jokester Spike Jones merrily mutated the saga of the demon cows and fire-snortin’ horses. But the biggest hit at that time came from pop crooner Vaughn Monroe, also in 1949. 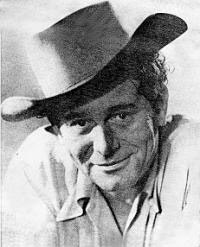 Of course, it didn’t stop there. It’s been covered by everyone from Concrete Blonde to Dean Martin. Frankie Laine, another popster with an ear for cowboy songs (think “High Noon” and “Rawhide”) also covered “Ghost Riders.”
Artists like Bob Wills, The Sons of the Pioneers, Gene Autry, and Marty Robbins brought “Ghost Riders” back West. Dick Dale went surfing with it. Ronnie Dawson made it a rockabilly romp. The Southern-rock group called The Outlaws introduced it to the dazed and confused generation in 1980. Johnny Cash sang it with the Muppets. Tom Jones took it to Vegas, and the Legendary Stardust Cowboy took it to Mars.
The fact that “Ghost Riders” has a cinematic feel to it is no accident. Jones did a lot of soundtrack work for John Ford Westerns, including writing music for The Searchers (in which John Wayne spoke a catch phrase that inspired a Buddy Holly hit, “That’ll Be the Day”) and Rio Grande. When Jones wrote “Ghost Riders,” he was working for the National Park Service in Death Valley.
According to the Western Music Association Web site, “The Park Service made Stan its representative to Hollywood film crews when they came to Death Valley. After a long, hot day of filming, cast and crew members often sat around and listened to Stan’s songs and stories. They encouraged him to get a publisher in L.A.” Shortly after, “Yippee-yi-yay, yippee-yi-yo,” was being heard across the land. 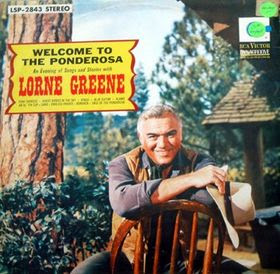 My two favorite versions of “Ghost Riders” are no longer in print. The one that raised goose bumps on me as a kid was on a 1964 LP called Welcome to the Ponderosa by Lorne Greene — yes, a tacky TV tie-in from Bonanza’s Ben Cartwright. This version has a full-blown orchestra, a chorus, and Greene’s distinct gravely voice. (Greene’s hit “Ringo” was also on this album.)
Then there’s the country-rock version from New Mexico’s own Last Mile Ramblers, from their 1974 album While They Last. The artist currently known as Junior Brown is playing guitar, and the vocals are by Spook James. 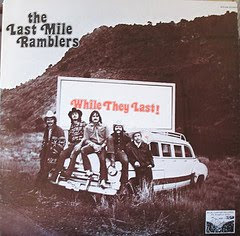 This was always a highlight of the Ramblers’ shows at The Golden Inn and Bourbon & Blues.
(You can hear the song on my (Oct. 2009) podcast at bigenchiladapodcast.com. )
I’m not sure how many cowboys changed their ways because of the warning in the song. But next time you see lightning in the sky, look for those red-eyed cows and gaunt-faced cowboys.
Also recommended for Halloween:
* Rob Zombie Presents Captain Clegg and the Night Creatures. On his previous music project, Texas singer Jesse Dayton, whose résumé includes stints as a guitarist for Waylon Jennings and Ray Price, teamed up with bluegrass singer Brennen Leigh to create an album of sweet country duets with songs like “Brand New Heartache,” “Take Me,” and “Back-Street Affair.” 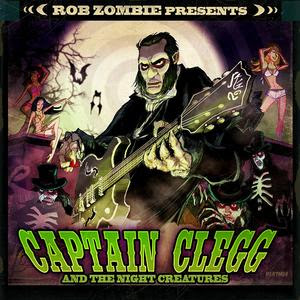 Since that time, Dayton was apparently kidnapped by the evil Rob Zombie and transformed into a fiend named Captain Clegg (a name lifted from a 1962 film starring Peter Cushing) to sing hillbilly horror songs like “Headless, Hip-shakin’ Honey,” “Two-Headed Teenage Transplant,” “Transylvania Terror Trail,” and “Macon County Morgue.”
These and seven other tunes appear on what is easily the Halloween album of the year.
Fans of Zombie’s most recent movie, Halloween II, might recognize Clegg and band from a music/dance scene in the flick.
But this isn’t the first Zombie/Dayton collaboration. In 2003, Zombie enlisted Dayton to write and record tunes — such as “I’m at Home Getting Hammered (While She’s Out Getting Nailed)” and “Lord, Don’t Let Me Die in a Cheap Motel” — for a fictional hillbilly duo called Banjo and Sullivan in conjunction with Zombie’s 2005 slasher flick, The Devil’s Rejects.
Although Dayton’s background is in country and rockabilly, there are all sorts of influences here. Take the opening track, “Zombie a Go Go.” It sounds like a Farfisa-fueled garage rocker — at least until the steel guitar solo. “Dr. Demon and the Robot Girl” is a tribute to late-’60s “country fuzz” production, an era in which fuzztone guitars, electric sitars and folk-rock elements crept into some country music.
None of these tunes is destined to become a classic like, say, “Ghost Riders in the Sky.” They’re all pretty dumb, but then again, they’re all good fun for “spooky people gettin’ Dixie fried,” as Clegg sings on “Honky Tonk Halloween.”
0
Shares