Steve Earle at The Sellersville Theater

I went to see and photograph Steve Earle the other night at The Sellersville Theater. Great venue to see and hear a show. Steve started the show with a few words about Greg Trooper and one of Trooper’s songs “Little Sister”. Greg was a friend and fellow songwriter who passed away a few days before the show. He then followed with a couple of songs from another friend and one of his teachers, Guy Clark who also passed earlier in 2016.

Earle then proceeded to a night of his own songs and a Townes or two thrown in. From his recent Terraplane album he sang “Your The Best Lover That I ever Had”. Earle followed with “My Old Friend The Blues” from Guitar Town a much earlier album. At this point I knew I was in for a ride across time with some great songs from the Steve Earle catalogue. My thoughts…GREAT! As long as we are back in the Guitar Town era he played “Someday” and without much more than a breath or two dove right into “Guitar Town”. “Tom Ames’ Prayer” was next with an explanation that it was an example of a song a twenty year old would write. Earle followed this with a song he said he would write at sixty. He also told the audience that it was his sixty second birthday. The song, “God is God” from the recent I’ll Never Get Out Of This World Alive.

Being a great story teller in song or in speech Earle told about being from Schertz Texas and how he didn’t realize until he was twenty seven that there was another way to get to Nashville from Texas besides hitchhiking. He then told the story of hitching home one Christmas, getting left off at the Schertz exit and even though he knew his parents didn’t live there anymore he went straight to his former home. Yes, in Schertz the police were the only ones that remembered him. That was one time a big truck picked him up. Another eighteen wheeler story was about loosing his hat. A black 3X Beaver cowboy hat was taken by the wind of a Kenworth speeding down the road and was last seen on the grill of the following Peterbilt.

Earle then got to what he called the chick song part of the program explaining that when he started out singing he wasn’t a jock so he sang songs that would get girls. He was into especially The Youngbloods and Jesse Colin Young. He was often asked about some songs, how he could still sing that song. He would reply that with some of his relationships all he was left with was a song and actually, all his songs are really about him. He followed with “Every Part Of Me”. Of course he brought out his mandolin for a wonderful instrumental introduction to “Galway Girl”. Earle then introduced a song he wrote to Guy Clark by telling the story how artist and friend Terry Allen said that Guy told him that he wanted his ashes intombed in one of his bronze sculptures. He followed the story by singing a wonderful tune, “Goodby Michaelangelo”. Of course the last song of the night, except for the encore, was “Cooperhead Road”.

Now for the political part of the program….The Encore. Actually, I have never seen anything like it before. With a mellow guitar cord progression for background Earle explained how our country wasn’t created with a revolution of the people. It was a revolution by rich farmers who didn’t want to pay their taxes and wanted to keep their slaves. He went on to say how the race question keeps coming up is because slavery is a basic part of our heritage. He spoke about it being a historic time in our history and we have to be prepared to fight for what we think is right. Singing is a form of fighting  and he intends to suit up and fight. He then ended the show with his song “Christmas In Washington” 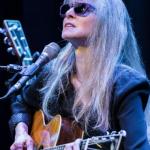 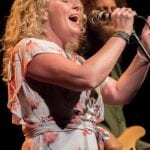