One of the most intriguing aspects about attending a St. Vincent concert is the anticipation. What will Annie Clark do next?

That’s what one high-strung son of someone was thinking for the rest of us while pressed up against the barrier leaving just enough breathing room between entertainer and her target audience as March wound down while that inevitable day for April fools waited in the wings.

A three-tiered centerpiece — perhaps representing the pink throne on the cover of the new album self-titled St. Vincent — was the vivid visual onstage.

Minutes before the Digital Witness tour unleashed all its glory for 90-plus manic minutes March 29 at Denver’s Ogden Theatre, almost everyone worshipping at the foot of St. Vincent’s shrine appeared to be blessed with that heightened sense. But specifically this twenty-something zealot, whose mind was racing, and he had to let it go before his head exploded into smithereens:

“If she comes popping out of the top of that like it’s a birthday cake, I’m going to go crazy!!”

Under the guise of St. Vincent, Clark has that effect. Bringing esoteric lyrics, provocative imagery, stylistic melodies and a high fashion sense into a rock fantasy world often dominated by macho men who prefer their Mondays filled with WWE Raw over Dancing With the Stars potentially paints a bizarre picture. One almost as strange as a football jock reading Kierkegaard. 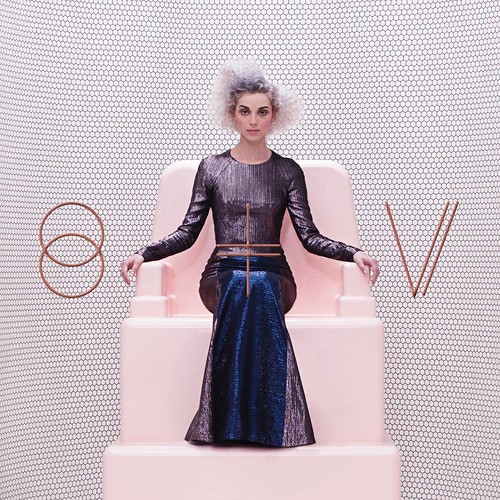 Weirdness is a way of life, though, for Clark, the New York-based musician who dares to be different and apparently isn’t satisfied just being an accomplished shredder with a cutting edge and brilliant mind.

Her collaborative Love This Giant album and subsequent tour with avant-garde visionary David Byrne (now that makes perfect sense) obviously stirred those creative juices. So after challenging herself, Clark decided to further entice her growing flock.

According to the newsletter emailed to fans on Jan. 14, Clark started writing songs for her fourth solo album just a couple of days after the end of that tour, which included a show-stopping visit as headliners at The Ride festival in Telluride, Colorado, in July.

Clark also compiled a list of ways to spice up the new show, then quickly eliminated three things:

1. dropping rubber snakes from the ceiling in bulk
2. pumping the theaters full of cotton candy-smelling mist
3. lining the rooms with mannequins dressed as the iconic photo of huey newton

Yet despite the sneak preview Clark provided in the Village Voice on Feb. 26, when the North American tour premiered at Terminal 5 in New York the day after the album’s U.S. release, there were still several surprises. 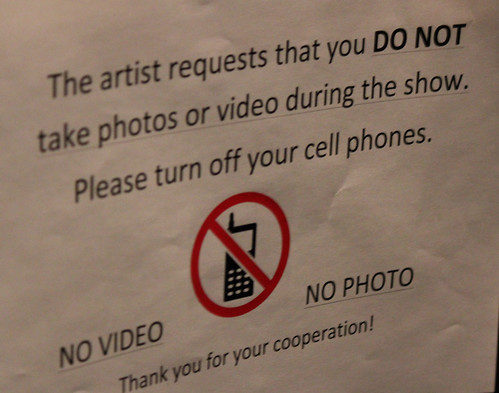 The show opens with that announcement, seemingly prerecorded and computer-generated, the first of many wonderful WTF moments. Clark wants her followers to enjoy the experience firsthand, not through their cell phone screens, and the numerous postings throughout the building (left) helped to accomplish that mission.

If Big Brother was watching, the 1,600 or so subjects crammed among the Ogden’s capacity crowd seemed eager to comply just to be part of one big happy family. With this leg of the tour finally winding down in North America before heading overseas (along with a date at Denver Botanic Gardens on Sept. 6), only a few secrets might remain, but just in case: SPOILER ALERT!

Once again, the music is grand, sweeping and soaring. Clark and her three St. Vincent bandmates from the previous Strange Mercy tour — Daniel Mintseris (keyboards, also on the Love This Giant tour), Toko Yasuda (Minimoog synthesizer, guitars, background vocals) and Matthew Johnson (drums) — roll through an 18-song set, and two more during the encore, without interruption. Only Clark’s evil glare thrown in the direction of her guitar tech after one of the first three songs temporarily disrupted the cool onstage vibe.

As Clark moves into her early 30s, her appearance and show evolve, too. The pretty dark curls and gentle asides to her not-so-secret “We love you Annie!” admirers from what she called “a rally of awesome” in 2010 at the cozier Bluebird Theater several blocks east down Colfax gave way to blonde waves and minimal banter on the Love This Giant tour.

Such a shocking transformation isn’t that unusual in age era of reinvention, but there’s generally a reason for making an unconventional fashion statement.

The idea of bleaching her hair was driven by an act nearly as outrageous — Clark’s guilty pleasure in The Bachelor, which she revealed in that same Village Voice article.

Now personal revelations like that raise questions — is she putting us on? — and may venture into TMI territory for those who want their St. Vincent to remain deep, dark and mysterious. But such is the existence of a paradoxical performance artist living in a material world. Conceptual art doesn’t sell itself, so Clark changes with the times, and if you can’t follow along, that’s your problem. 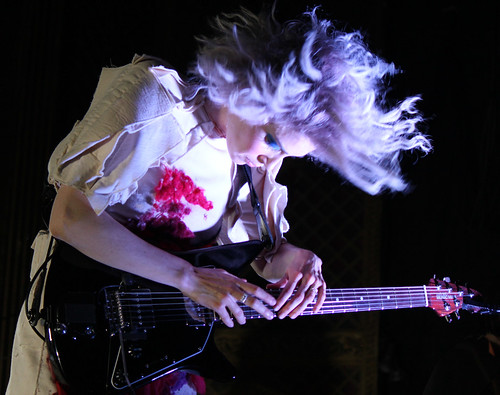 This time around then, Clark takes on the persona of a robotic Stepford Wife, enhancing her signature kabuki doll shuffle with chilling, choreographed movements of her hands, arms and head. And while addressing her audience after Acts I and II, that machine-like precision continues with a friendly but somewhat detached delivery.

These bits, rehearsed over a two-month period and touched up to personalize the occasion for the current city in which she’s playing, are observational head scratchers that could have fit into a Stephen Wright monologue, Arsenio Hall “things that make you go hmmmm” segment or a sketch on Portlandia, which she has appeared on twice this season.

Some worked betters than others, with mentions of Colorado predictably getting the best reaction, while others were met with blank stares or awkward silences.

Based on a “we-have-a-few-things-in-common” thread, the hits included this random thought that any misunderstood youth probably has experienced:

• “Sometimes when you walk into the 7-Eleven on the corner, you worry that shopkeepers think you’re stealing even when you’re not stealing.”

Then there was this reflection that referenced two comedians forever on the comeback trail:

• “I have this feeling that sometimes when you walk in your neighborhood and you don’t have your glasses on, you just superimpose the faces of famous people onto every stranger you see, so that everybody you pass is Eddie Murphy and Arsenio Hall.” (crowd laughs)

• “And once when you were small, you told a lie. And you got very, very sick the day afterward. And you thought, ‘Oh no, I’m being punished.’ But then you remembered that in the state of Colorado, you don’t believe in that kind of retribution. (laughs, cheers) But just in case, you went into your garage and you built a shrine out of aluminum foil and Pabst Blue Ribbon cans (cheers) … and legal marijuana.” (laughter)

If the levity was a nice change of pace and kept the people guessing, it was the music that remained the show’s consistent crowd-pleaser. Singer-songwriters often say they’re all about serving the song, and this was no exception.

Sometimes it was impossible to distinguish who was playing what, but the arena was filled with the rattle and hum of synthesizers sounding like angelic choruses and grinding guitars providing angry distortion and just as many heavy artillery blasts as the drum kit.

While she was nobody’s birthday cake girl, Clark did use those pink steps to tantalizing effect during a moving interlude in the middle portion of the show, stretching out, chanteuse-style, across the second step for “I Prefer Your Love.”

Following one giant stride to the top for “Cheerleader,” Clark deserved a royal crown for the blistering extended solo near the end of “Prince Johnny” before she handed off her instrument to slither down each step until she met the floor headfirst.

That was among eight of the 11 songs unveiled from the Feb. 25 release, with no lightweight in the bunch.

Nestled in between surefire staples “Marrow” (off 2009’s Actor) and “Northern Lights” (from 2011’s Strange Mercy), the “Huey Newton” pairing with “Bring Me Your Loves” was like throwing a hallucinogenic haymaker to take the Mile-High citizens to Fourteener heights during the final act.

Clark’s powerful 1-2 combination from St. Vincent just might floor the unsuspected, too, a blindsiding blow similar to the surprising knockout punch delivered on Actor’s “The Strangers,” the explosive track that disappointingly was left off this set list.

Yet there were plenty of other fireworks. In presenting Yasuda as “bringer of the thundering low end and the celestial voices and face-melting guitar,” Clark sounded like a ring announcer before a prize fight. Their ax-wielding interaction was just as intense and nearly as memorable as the laser sword-like battle Clark and a karate-kicking Byrne threw down eight months earlier in Telluride.

In the course of an hour and a half, Clark went from cool android to dry-ice humorist to royal highness to dancing queen to punk rocker, embodying the latter on “Krokodil,” the non-album number played with over-the-top flamboyance.

She flailed about and threw herself to the floor, an updated version of the collapsing replicant Pris in 1982’s Blade Runner. Unlike the doll-like figure who was heroically eliminated, a laid-out Clark literally reached out to connect with one enthralled fan, a compassionate gesture that added a sweet, personable touch.

After returning in a black leather miniskirt for the encore that began with a tender solo performance of “Strange Mercy,” Clark brought back her band, calling Mintseris a “Svengali” and Johnson “a grand architect.”

When the onslaught was over, she simply clapped, waved, bowed and smiled, peeling off another warm layer of herself that few had witnessed throughout the night. 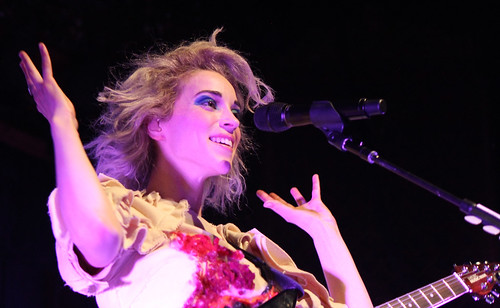 Taking St. Vincent on an innovative, ongoing journey somewhere between what Clark has called “accessibility and lunatic fringe” must be exhausting, even for a chameleon that can naturally adapt to its surroundings.

Reinvention is a catchy, popular and overused term attached to entertainers these days. And with the exception of a few actors such as Daniel Day-Lewis, Christian Bale and the late, great Philip Seymour Hoffman, most of them are women, from Madonna to Lady Gaga and, even now, Miley Cyrus.

But to be truly original, avoiding that overused hashtag seems to be a daunting task few are willing to accept. Unless you’re St. Vincent.

With so many sides to embrace, capturing the real Annie Clark would be the icing on the cake.

Concert photos by Michael Bialas. See more of St. Vincent in Denver on March 29, 2014, and with David Byrne on the Love This Giant tour in Telluride on July 14, 2013.

John Murry … truly at the ‘End of The Road’