For the next several days, we’ll be sharing a special collection of songs with you, one at a time, performed by some of the finest artists at work in Americana music these days. The tunes in question have been plucked fresh from a new album with Roger Knox which will be released on 2/12 by the fine folks at Bloodshot Records.

According to Bloodshot: “Roger Knox, aka the Koori King of Country as he’s known in his homeland, is an Aboriginal Australian Country & Western singer with a honeyed bear hug of a voice. Bloodshot artist Jon Langford (Mekons, Waco Brothers) met Knox on a visit to Australia several years ago. When he heard of Roger and the potentially-soon-to-be-lost subculture of this utterly unique cultural collision, Langford knew he had to be involved. Stranger In My Land is a collection of songs originally written by Aborigine artists who were Knox’s peers and predecessors; some tunes previously recorded but difficult to find as well as several unrecorded, handed-down folk songs (which without this recording, could have been lost forever).

“Since Roger has such an inspiring life story and rich musical history, we wanted to have fellow musicians—the artistic contributors to his album—tell you about how Roger’s musical journey connected with each of them throughout the making of this album. Each day we will feature a different artist who contributed to Roger’s album, their testimonial, and an exclusive streaming track from the forthcoming album.”

First up is much-beloved-by-the-ND-Community chanteuse Kelly Hogan. (You folks counted her 2012 release, I Like to Keep Myself in Pain, among your Top 50 favorite recordings of last year.) She recorded a version of “Blue Gums Calling Me Back Home” with Knox for this album. Here’s her testimonial, followed by a stream of the song: 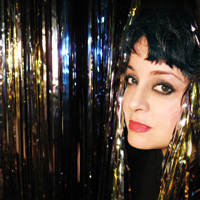 “When I think of Roger Knox, I think of those “Eternal Flame” memorials that you see in front of courthouses or city halls.

1. Because that flame represents not one, but a legion — the way Roger Knox has beautifully represented his Aborigine people and lovers of country music. Woo!

2. Because that flame refuses to die — no matter how hard others have tried to stomp it out. In your FACE, decades of racist oppression! Woo!

3. Because that flame is warm and it is a beacon. It burns stalwart through
the metaphorical dark night, guiding future generations — the way glowing neon leads you to the honky-tonk — to a place of brotherly love and understanding where we all speak the universal language of music.