I bought Sarah Siskind’s Covered at a fundraiser for a local radio station.  It was a winter evening in early 2007 and I was drinking overpriced microbrew, also part of the fundraiser.  I had never heard of Sarah Siskind but I figured that I would do my civic duty to support community radio.  I had just moved to town and was living in a great little apartment.  It was a two-bedroom place over a garage with skylights and a tangle of moss covered limbs bowing low over the balcony.  I was just getting started here on the scene, learning the venues, meeting the folks.  It was my first year of teaching and as I recall, and I was having a hellova go.

When I got home from the fundraiser late that night, I popped Sarah’s album in for a spin.  I was immediately captivated by her incredibly plaintive vocals.  I quickly discovered that this album is not the type of album that one takes for a spin.  It’s not the type one dances around the room and leaves perched on a barstool until next Friday night.  This is the kind of album that sips red wine from a tumbler in a dimly-lit corner.  She is confident in her grace and her solitude but sometimes she will agree to dance.  And for this you are grateful because when she dances, she always dances real slow.

The record is layers and layers thick.  Sarah’s voice, earthy and mournful, is brilliantly offset by Bill Frisell’s dreamy guitar work.  The songs themselves play like a collection of tiny novellas leading you from one scene of quiet longing to another.  The album is moody, mysterious.  Even the album art is plain black and white, Sarah never looking directly at her audience.  It was only with many listens, weaving through the intricate ribbons of guitar and root-bound vocalise, that I began to unravel the stories, rich in detail and reverie.

As I understand it, Siskind released the album 10 years ago, independently, but was never able to tour behind it due to a sinus ailment that nearly derailed her career.  The fortunate part is that Sarah recovered and went on to write and record scores of beautiful songs since then.  But I wonder, if Sarah hadn’t recovered her health and was unable to sing, would Covered have gone relatively unnoticed and become lost in the passing of time?  I mean, 10 years after it’s original release, the re-release of Covered is being featured on NPR and has made it into the Toronto Star sandwiched between Lou Reed and Bart Simpson.  Now, there isn’t any doubt that Siskind is garnering this attention

because her music deserves to.  However, I am fairly certain that Sarah wouldn’t have made, say, the Toronto Star 10 years ago with this very same music.  And it’s not because the Toronto Star is lame.  And it’s not because she didn’t deserve it then just as she does now.  I would argue that it is because because, well, no one had ever heard of her before.  (No one except for, you know, Bill Frisell and producer Tucker Martine.)  What would have happened if Covered were her only release or if Sarah continued to create beautiful music that was never covered by heavy weights such as Alison Krauss and Randy Travis, thereby helping to expose her to new ears?  Would Sarah Siskind still be virtually unknown for no other reason than that she was virtually unknown?

Thankfully for us, Sarah Siskind has been on a slow burn to stardom ever since returning to music after the release of Covered.  But I have to wonder, how many wonderful talents aren’t so lucky?  How many talents put out fascinating albums that receive little to no attention and soon become just another branch in the tangle of limbs?  Justin Vernon, whose record label Chigliak is releasing Covered, calls Sarah’s music life changing.  Listening again to this beautifully crafted album puts me squarely back in my apartment on Lorane under the skylights and tumbling winter rains.  This music is capable of moving you, of breathing into you with it’s soft and soulful charm.  For me, discovering Sarah Siskind’s Covered back in 2007 was like unwrapping a gift that I didn’t even know to ask for.  She is a once-in-a-lifetime kind of artist in her delivery, honesty and songwriting.  And Sarah is here now, ready for you to listen.  But then, she’s been here all along.  The real question is, where were you? 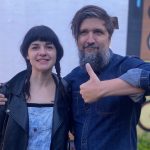 THE LONG HAUL: Remember to Let the Light In