When the Hammond B-3 kicks in to start this album, trailed by Trooper’s resonant, soulful, alt-country vibrato, it’s clear one of America’s best (and underappreciated) songwriters is taking us along for another enchanting ride through a life of bruised relationships, guarded hopes, and interesting characters.

Trooper, who has worked with Garry Tallent and the legendary Dan Penn as his producers in the past, settles in with Stewart Lerman (Marshall Crenshaw) this time and they’ve assembled the usual fine cast of supporting players, notably Kenneth Blevins (John Hiatt), Dave Jacques (John Prine) and Kevin McKendree (Delbert McClinton).

As always, the playing is rootsy, tasteful and filled with soulful grooves. But it’s the writing, the journey Trooper is on lately the occupies center stage. He’s well into mid-life. He’s been through Nashville’s wringer and he’s back in Brooklyn now (he started as part of the East Village folkie movement in the 1980’s with Shawn Colvin and others). The songs reflect that journey with both resignation and resolve. “Nobody in the Whole Wide World” challenges a lover (past or present?) to do better. “Dreams Like This,” continues a Trooper theme, a love song, though not a simple one. “Second Wind” is beautiful and affecting, a resolute ballad. “They Call Me Hank” recalls Prine’s “Hello In There” with its unapologetic sadness. “Might Be a Train” evokes Jimmy Rodgers and, what else, country train songs. These songs are so good, you’ll swear you’ve heard them before; the rootsy grooves and Trooper’s warm voice are spellbinding.  If you’re a fan of Dan Penn, John Prine, Rodney Crowell and their peers, you owe it to check out Trooper.

The image of Lori  McKenna is that of a blue collar housewife sitting at her kitchen table penning songs that somehow find their way onto the albums of country superstars (Faith Hill, Keith Urban). But that doesn’t do justice to the depth, subtlety and honesty of her songs, stripped down to their essence on her largely acoustic solo albums (although this one has strings in just the right places and background vocals from Kim Carnes). Yes, McKenna had her shot at the big time with 2007’s major label disc, “Unglamorous,” a stint opening for Hill, and an appearance on “Oprah.” But she seemed uncomfortable glammed up and over produced (or maybe it was just uncomfortable listening and watching that incarnation).

She is the girl who married her high school sweetheart and quickly had babies — five in all. But she’s not a stereotype out of “Mad Me” or “Ms.” McKenna does the difficult — writing about life, real life, with an unerring eye. It’s all here, the shadowing doubts, the gentle joys, the people we recognize from our lives. McKenna is a staple of the Boston folk scene, but her voice is more heartland than right coast, more open spaces than urban races.

There’s not enough space here to list the highlights, which include “Lorraine,” about the bonds between mothers and daughters, “Buy This Town,” an homage to her Stoughton, Massachusetts, home, and “Rocket Science,” a piece of unbearable heartache leavened by McKenna’s typical resolute sweetness. She sings: Love is rocket science/What comes up it must come down/In burning pieces on the ground/We watch it fall/Maybe love is rocket science after all/Not if, but when, you crash and burn/Somehow you survive/But you’ve touched the hem of heaven/For a time you felt alive.”

McKenna is the  Raymond Carver and the Bruce Springsteen of home life, exposing the weak joints, laying out the hard choices and the undying subterranean optimism, and then portraying them in all their contradictions and complications. 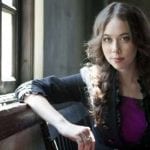 A Conversation with Walt Wilkins