Release is dedicated to the late Tim Krekel. Co-produced with Michael Utley, accompanists include Will Kimbrough, Casey Wood, and Jim Mayer.

NASHVILLE, Tenn. — Marshall Chapman’s life, as author/friend William Gay puts it, “is like five or six lives shoehorned into one. It’s like a movie or a good book.” Speaking of books, the multifaceted singer-songwriter has written two, and the newest (They Came to Nashville) is being released the same day as Big Lonesome, her sixth release on Tallgirl Records and twelfth overall.

“I wasn’t going to make another album, at least not alone,” says Chapman. She and close friend Tim Krekel were planning to record a duet album when Krekel was diagnosed with cancer. “Three months later he was gone,” Chapman continues. “Dreams were dashed, gigs got cancelled, and life went on. As trite as it may sound, the only thing that comforted me during this period was picking up my guitar. Then new songs started writing themselves. They were coming from an uncharted place so deep and true, I knew what I had to do.”

Chapman contacted Michael Utley (producer for Jimmy Buffett and Roy Orbison, and player on albums by Aretha Franklin, Kris Kristofferson, and the Neville Brothers), who brought in Will Kimbrough, “Uncle” Jim Mayer, and Casey Wood. Utley himself plays Hammond B3 organ.

“I’d never recorded or worked with any of these guys,” Chapman says. “Sometimes it’s good to get out of your comfort zone.”

Once in the studio, things started happening. “Whatever it was, it was bigger than all of us,” Chapman says. Gay, known for his novel Provinces of Night among others, offers this assessment: “Big Lonesome feels organic, like something that just grew naturally on its own. It sounds like the result of one of those rare and happy occasions when everything fell together in the recording studio, when everyone is on the same page, when the musicians are locked in almost reading each other’s minds like The Band in its early days.”

Chapman has perhaps her strongest slate of songs here, most of which she wrote or co-wrote. Some were inspired by the loss of Krekel (whose vocals and guitar appear on this album), and his memory seems to be an invisible presence that has been absorbed into the music. The songs have a stoic strength. Remember concept albums, when songs used to form a cohesive and interlocking whole? Big Lonesome has that feel. It also doesn’t hurt that Marshall is in great voice, or that she surrounded herself with great musicians.

Gay continues: “I first heard of Marshall Chapman through the pages of a now-defunct magazine. It was in the late ’70s and Jaded Virgin, her second album for Epic, had just been released. The article summed up Marshall’s background: a refugee debutante from South Carolina wealth and privilege who laid it all aside to follow music, heading out with only her guitar and the songs already forming in her head, mesmerized by the sight of Elvis from the balcony of a Spartanburg theater where she bonded irrevocably with music. A rebel who didn’t even know she was rebelling, she sounded like a combination of Elvis, James Dean, and Lauren Bacall, taking Nashville by storm, kicking down country’s sexist doors with ballroom slippers. She also sounded like someone I’d like to know.”

Chapman has written and performed with the likes of Willie Nelson, Emmylou Harris, and John Hiatt; written plays with Lee Smith, Jill McCorkle, and Matraca Berg; had her songs covered by everyone from Wynonna to Joe Cocker; acted in a movie (she plays Gwyneth Paltrow’s character’s road manager in the soon-to-be-released Country Strong); and received advice from Jerry Lee Lewis: “Don’t you burn out, hon,” Lewis told her after she and her band opened for him one New Year’s Eve in Atlanta. Marshall has, like Icarus, flown too close to the sun a time or two, had her wings scorched by burning candles, but Big Lonesome is proof she never came close to burning out.

“Nobody goes through life without learning things,” concludes Gay. “But not everybody can take life’s joys and hard lessons and by some curious alchemy transmute them into art. Marshall Chapman can. ‘I wouldn’t have it any other way,’ Chapman sings on ‘Falling Through the Trees.’ And that’s good news for the rest of us.”

Longtime friend Kristofferson said of Marshall’s new album: “In this soulful, sincere tribute to her ‘best friend in music, Tim Krekel,’ Marshall reminds me how she reminds me of Hank Williams. The songs are heart-breaking and beautiful and exhilarating and absolutely honest. And Mike Utley’s co-production and keyboard and Casey Woods’ mixing and percussion are perfect. There’s not a false note on the album. I believe Marshall truly does ‘love everybody’ and it shines through every song.” Matraca Berg added, “I just love this record. It’s . . . like . . . Marianne Faithful and Willie Nelson had a baby!” And Todd Snider has this to say: “This record kicks ass. Beautifully written and recorded, it’s sad, but not hopeless . . . like Blood on the Tracks.”

For Chapman news and musings, as well as announcements about her CD, book, and live appearances, visit her website: www.tallgirl.com. The album will be available from the site on October 26. 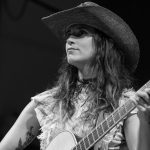 THROUGH THE LENS: Sierra Ferrell and Other Outstanding August Roots Music Releases