Malcolm Holcombe: On Tour in Ireland and the UK (April 2014)

They say ‘you never forget your first time…’ and I’ll never forget the first time I saw Malcolm Holcombe play live. Brighton’s Latest Music Bar. He sauntered on to the sparsely furnished stage, without any introduction, sat in a chair and from the first note, silenced the audience who had been chatting during the interval, and held our attention for the rest of the evening. ‘Held our attention’ doesn’t really do it justice – he’s a force of nature and he absolutely mesmerised us with his singing and playing.

Reviewing the show I said ‘A man whose stage persona belies a gifted and talented musician. Love watching musicians who are in complete control of the guitar and boy he is that all right! For most of the show he was sitting down and at times, he rocked and swiveled so much on the chair that I kept thinking he’s going to fall off any moment – but he didn’t! Occasionally he stood to sing but still bent down to reach the mic which was at seat level – a fantastic evening. Great reception from the crowd who from the off were in rapt attention’.

Since that time, I’ve always taken the opportunity to see him play when he’s visited the UK and he’s still the unpredictable performer who makes my heart leap – one moment he’s like a man possessed and the next he’s singing a tender love song. I’ve come to the conclusion that at heart he’s a gentle soul but on stage he’s scary, he’s visceral and likes to keep his audience on their toes. Ain’t nothing wrong with that!

I’m thrilled that he’s coming back to the UK very soon. I just know that he will be defiant and rebellious and seemingly uncontrollable and yet tender and gentle and compassionate…

He’s currently touring in mainland Europe and in April will be hitting Ireland and the UK. 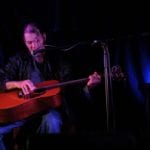