A new Hot Club of Cowtown release is a pretty big deal in these circles and as my detractors probably believe  I don’t know enough about Country music to do such a record justice (as if!) I invited two friends who are HCCT fans around for a listen on Sunday morning.

In fairness I learnt a lot about Western Swing at the Gateshead Sage Americana Festival in July 2010 when what I thought was ‘Time-Warp’ music was actually ‘timeless’ as four very young bands played their own delightful interpretations with great passion and gusto; making me want to hear even more.

Opening track She’s Killing Me throws down a marker to tell you that WHAT MAKES BOB HOLLER is going to be something really special as the band flings everything they have at a full tilt Western Swing tune that had even my toes tapping.

The pace never lets up as Whit, Elana and Jake alternate on vocals with Elana winning my heart on the Jazzy Time Changes Everything and the beautiful Keeper of My Heart which could easily have been a Patsy Cline tune.
The Country Music experts in the room weren’t as easily swayed by a pretty girl and tried desperately to convince me that the best tunes were actually Big Ball in Cowtown, Along the Navajo Trail (which sounded like it should have been in a John Wayne film!), It’s All Your Fault (Elana again – swoon) and The Devil Ain’t Lazy which are all trademark Hot Club tunes in the style of Bob Wills which is the theme of the whole album.

Another couple of tunes that deserve a mention are Maidens’ Prayer and Faded Love, two instrumentals that could easily have been by the original Hot Club de Paris and the final toe tapper Stay a Little Longer which will surely be the song that ends their gigs in October.

WHAT MAKES BOB HOLLER won’t be in my final Top 10 albums of 2010 but I have found it very enjoyable and if you even vaguely like Western Swing or the Hotclub of Cowtown you will absolutely love it as it simply sizzles and simpers with Whit Smith’s effortlessly cool guitar playing, Elana James’ elastic fingered fiddle and Jake Erwin’s happy-slappy upright bass; not to mention some of the most enchanting harmonies I’ve heard in a long time. 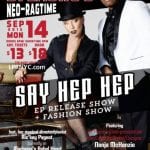 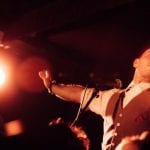