Last month began the new era at eMusic — where they got all those albums from Sony — and, by coincidence, they claim, nearly doubled the price of subscriptions. (See my rant about that HERE.) I found a way to beat the system.

Until this month I was paying $19.99 a month for 90 tracks — just over 22 cents a track. With eMusic’s new pricing scheme, my new plan is $19.99 for 50 tracks. That’s about 40 cents a track. Still a great deal compared to most other services (except the delightful Aimee Street, who I’m seeing on the side).
But, taking advantage of some new rules at eMusic, I was actually able to download 169 tracks instead of my allotted 50. That’s right, more than three times my limit and 79 more tracks than my former generous limit.
The secret is the new policy regarding full-album prices. Under the new rules, most (but not all) albums cost 12-track credits, whether the albums contains 20 tracks or two. This is bad for jazz and classical fans who have been used to spending just one credit for tracks that might be 10 or 15 minutes long. (And there have been lots of complaints over at the eMusic message boards about this.)
But it’s great for fans of anthologies of old-time music — hillbilly, blues, old jazz, etc. — which tend to have lots more tracks per album.
And it’s especially great for those of us who have “picked at” big anthologies over the past few years. I found several examples of collections in which I’d already bough several tracks. As you’ll see below there were several anthologies where I was able to download multiple tracks at little or no expense.
The album-price policy is not consistent. Most are 12 credits per disc, but I found one (The Delmore Brothers) where there’s more than two discs worth of music for just 12 credits. (I’m betting some of these will be “fixed” before long. And there’s some albums where there’s no full-album price, so 20 tracks still cost 20 credits.
I won’t be able to get so many bargains next month because I don’t have many more incomplete compilations. But I thought this was a good way to make lemonade out of the lemon eMusic threw at us.
So enough economics. Here’s my eMusic downloads for the past 30 days:
* Travel in Your Mind by The Seeds. Tommy Trusnovic had this CD a few weeks ago when he helped me out on the Terrell’s Sound World Sky Saxon tribute. I was jealous, but happy to find out it was available on eMusic.
This is a collection of rarities and outtakes, including a rehearsal of their biggest hit “Pushin’ Too Hard,” which as Tom pointed out, is remarkably similar to the final product we all know and love (which also is included here.)
There’s a 10-minute version of the smoky psychedelic classic “900 Million People Daily” and other journeys to the center of the mind such as “Chocolate River,” the near 8-minute “Fallin'” (featuring a harpist) and of course the raga-rock title track. On “Daisy Mae” Sky sounds almost rockabilly. Likewise “Pretty Girl” conjures Chuck Berry. But most surprising is “Fallin’ Off the Edge,” which features what sounds like a pedal steel, anticipates The New Riders of the Purple Sage and other country rockers. 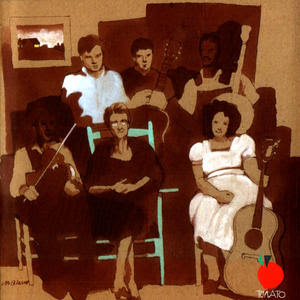 * Elementary Doctor Watson by Doc & Merle Watson. This album, released in 1972, is the very first Doc Watson album I ever owned. Just about every track is filled with happy memories — “Freight Train Boogie” (one of my favorite Delmore Brothers tunes), “More Pretty Girls Than One,” “Worried Blues” captures just about everything I love about hillbilly music. My favorite line in “Three Times Seven” — “I’m wild and woolly and full of fleas, I’m a no-good son of a gun” pretty much summed up my self image back in those days.
When Willie Nelson sang “I Couldn’t Believe it Was True” on Red Headed Stranger a few years later, I already was familiar with the song, thanks to Doc. And when I think of “Going Down The Road Feeling Bad,” I hear Doc Watson, not The Grateful Dead (or even Woody Guthrie!)

Indeed, to wax corny, the title of the last track, the lovely “Treasures Untold” sums up how I feel about this record. 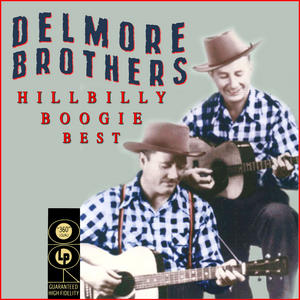 * Hillbilly Boogie Best by The Delmore Brothers. As I mentioned in the intro to this post, this album represents one of the greatest eMusic bargains — 60 tracks for the price of 12.
Alabama brothers Alton and Rabon Delmore started recording in the early 1930s and stayed active until the 1950s.
The title of this album is a little misleading. On several tunes — “Honey I’m Rambling Away,” “Old Mountain Dew,” “I Got the Railroad Blues” to name a few examples — you can hear how they were heading for the boogie, but basically this is an acoustic duo with sweet hillbilly harmonies.
Unfortunately this collection doesn’t include “Freight Train Boogie” (it’s on this collection). But they do have one of my favorite Delmore train tunes, “Don’t You See That Train,” though I still like the version by The Delta Sisters best.
Sociologically speaking, the most interesting song here is “Lorena the Slave,” a song about a plantation slave who loved a “yellow girl” who also was a slave there. But after seven years, the master sells her, and though the singer prays they’ll meet again, she dies before any reunion.
I’m also fond of “That Yodelin’ Gal Miss Julie” a song about a 300-pound banjo-plucking charmer. 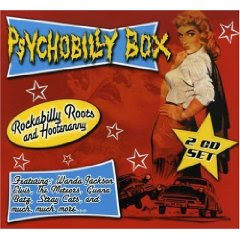 Psychobilly Box (Disc 2) by various artists Here was another good bargain. I got 22 tracks for just two credits. A few months ago I downloaded the first disc. That was 22 tracks, so I just needed to spend two more for the entire second disc.
It was worth soending two track credits, but to be honest, Disc 2 just isn’t all that great. As The AllMusic Guide points out, it’s pretty obvious that the producers don’t really know what psychobilly is. There’s some “real” psychobilly here — The Tallboys, The Meteors, The Frantic Flintstones, The Guana Bats, etc. One of the coolest of these is “Norman Bates,” the last song on the album, by The Tailgators.
And some real rockabilly Wanda Jackson doing a decent version of “Blue Moon of Kentucky.” There’s an interesting live recording of a 19-year-old Elvis singing “That’s Alright, Mama” on the old Louisiana Hayride radio show. And a so-so Bill Halley re-recording of “Rock Around The Clock.”
But my problem isn’t “authenticity.” It’s some of the weird techno-seance products on this disc that almost seem like desecrations of national treasures. Did the band 13 Cats (featuring ex-Stray Cat Slim Jim Phantom) really believe they could improve on Gene Vincent’s “Be Bop a Lula” by adding juiced up drums and an irritating horn section ?
And even weirder — and further away from rockabilly — is the mash-up of Marilyn Monroe (!) and a band called The Swing Cats on Marilyn’s song “Diamonds Are a Girl’s Best Friend.” With its production that reminds me of “Stars on 45,” this is so tacky I almost like it. 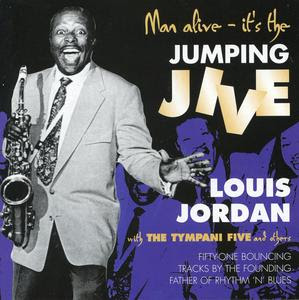 * Man Alive It’s The Jumping Jive by Louis Jordan. Best deal yet! Twenty three tracks for FREE! Years ago I downloaded 28 tracks from this album. I visited the album’s page on eMusic and saw that I could download the remaining tracks for zero credits.
I already had several of these tracks on an old CD. (“Five Guys Named Moe,” “Is You Is Or Is You Ain’t My Baby” and others) But you can’t argue with free.
Talk about national treasures, it’s hard to get enough of sax-man/shouter Jordan. He spanned so many genres — jazz, blues, R&B. Jordan even took a stab at calypso with “Run, Joe.” And I’m not sure if he was influenced by western swing or he influenced it. Probably both. (He was just three years younger than Bob Wills. Both men died in 1975.)
He made a name for himself in a big city (Philadelphia). Like Cab Calloway, his songs were filled with hipster jive talk. He Like Cab Calloway, his songs were filled with hipster jive talk. He was comfortable dueting with Bing Crosby (“My Baby Said Yes”) is on this collection.
But Jordan started out as a country boy, born in Arkansa. You can hear those roots in songs like “Ain’t Nobody Here But Us Chickens” and “Barnyard Boogie” (which features a tasty little steel guitar solo). He even played in a traveling minstrel show. Jordan in many ways was the embodiment of American music 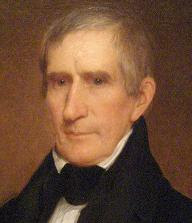 * Presidential Campaign Songs, 1789-1996 by Oscar Brand. Another great deal. Twenty eight tracks for free. Same story as the Louis Jordan collection. Last year I nabbed 15 tracks. Now eMusiclet me have the remaining tracks for free.
I wasn’t exactly craving more of these songs. But who knows, some day I’ll need “Get on a Raft with Taft” or “Marching With McKinley” for some radio show or podcast.
Actually some of the tunes from especially bitter elections are nice and nasty. This version “Rockabye Baby,” rewritten as a campaign song for Martin Van Buren basically accuses his opponent William Henry Harrison as a hopeless drunk who “sits in his cabin drinking bad rum.” Meanwhile Harrison’s song brags about “log cabin and hard cider.”
This album was released during the Clinton administration, so Clinton’s the last president to have a song here. Unfortunately it’s “Don;t Stop Thinking About Tomorrow.” It sounds just as wretched by Oscar Brand as it did by Fleetwood Mac. Plus :
* “Put Your Cat Clothes On” by Carl Perkins. Perkins was just so cool …
* The tracks I didn’t get last month from How Big Can You Get?: The Music of Cab Calloway by Big Bad Voodoo Daddy
0
Shares