A little bit of news to kick it off this week: it appears that eighty year old Leonard Cohen is going to pass for the moment on touring in support of his latest album, but as a nice marketing gesture to extract more money from his fans, Columbia/Sony is releasing a “Live in Dublin” DVD/CD set from last year’s shows in time for the holiday season. And for reasons that I’m sure make impeccable sense to some executive sitting behind a glass desk somewhere, three of the songs weren’t filmed in Dublin, but rather in Canada. That nugget of information reminded me of this line from “Bird On A Wire”:

“If I, if I have been untrue

I hope you know it was never to you.”

Up until this morning I’d never heard of the American Academy of Arts and Sciences. Or maybe I did, but I’d forgotten them. Happens from time to time, I think. Established by the Massachusetts legislature in 1780, I read on their website that they are an ‘independent policy research institute with the ability to draw on many of the world’s leading scholars and practitioners from all disciplines and professions’ and that they provide ‘authoritative and nonpartisan policy advice to leaders in government, higher education, business, and philanthropy.’

They also seem to bestow and give out awards, and this week they handed one over to Ralph Stanley. Elected as a fellow in the humanities and arts category, it comes just months after he was awarded an honorary doctor of music degree from Yale University. Seven years older than Leonard Cohen, Ralph is still out there on the road. “God has had his hand in my career for the past 68 years. It’s up to him wen I quit,” reads a message posted on Stanley’s website. “I have no plans of slowing down. I love my fans, and I love performing.”

Congratulations doc….this is for you.

I’ve had this book sitting on my night stand for weeks, and decided to finally pick it up and read it. Dave Van Ronk’s The Mayor of MacDougal Street (with Elijah Wald) is as interesting and riveting as I suspected it might be, so why did I resist it for so long? I’ll tell you why. On the top of the cover of this particular edition, it reads: The Life Story That Inspired The Coen Brothers Movie INSIDE LLEWYN DAVIS. Their caps, not mine.

Bullshit. That damn movie has as little to do with Van Ronk, his story, his politics and his music as a flea does with a bucket of ice. But I take a deep breath and find some solace in the words of his widow, Andrea Vuocolo: “It’s a beautiful movie,” she says. “It’s subtle, multi-layered, and touches on so many issues. But Llewyn Davis is not Dave, and I hope people don’t think he is.”

While she and I may have different tastes in cinema, I’m tired of pissin’ in the wind because I think the Coens’ did a disservice to not only the man, but the memory of the Great Folk Scare and their outright mean and nasty portrayal of Jean Ritchie and the Clancy Brothers. But hey, the soundtrack was pretty good and lots of people seemed to like it. So it’s time to let it go.

But I do so wish there was more video around of Dave. What there is left is mostly of an older man, especially a bunch from a festival in New Haven just four days after nine eleven. It seems weird to watch. I remember seeing him at the Philadelphia Folk Festival in the late sixties, and this clip below from 1981 is the best representation of my memory of him on stage. It’s raw. And real.

Up until a few months ago, I used to commute from the northern suburbs down to Manhattan; passing through Grand Central, down the steps to the 4-5-6 subway platform and depending on the weather, I’d either hop off at Union Square and walk down University and through Washington Square Park to SoHo, or I’d keep riding to Houston….which is not pronounced like the town in Texas. One of the many things I really miss about my daily trip is the music.

Although I’ve never been able to actually crack the code, there seems to be a schedule of sorts of what singer or player or group or dancer or gymnast or juggler or comedian will perform at a particular place at a particular time. For example, there’s a Korean kid who plays classical music on a Casio with his father standing next to him and watching (presumably) the tip money, who fluctuates from Times Square to Penn Station to Grand Central and other points along the way on a precise schedule. On the other hand, I recall once seeing an amazing old time soul singer doing the Intruders and Dramatics’ catalog in complete drag that mesmerized me, while most commuters gave him wide berth, but I could never find him again. And of course the pole vaulting gymnastics inside a moving subway car with a captive audience has been the latest cause of debate over the merits of ‘it’s showtime’ versus emergency medical care: a foot in the face just plain hurts.

One band who was always at the same spot at least one morning each week, albeit with a shifting lineup, were a group of African-Americans who played pure Americana: jazz, blues, bluegrass, rockabilly, rock and roll and country. On their website….oh yeah, they got one…they describe themselves as one of the last black string bands. Fiddler and vocalist Henrique Prince explains the concept: “More than simply keeping an important tradition alive, we’re knocking down the wall and letting people know that this music is still exciting to listen to today. It gets people asking questions and we love that.”

When I mentioned them to a friend, a lifelong New Yorker, she just laughed and said “You’re talking about the Ebony Hillbillies”. In addition to the subway platform, I learned that they’ve done Carnegie Hall, been in films, have at least three albums released and collectively here’s a list that some of the musicians that members of the band have played with: Pete Seeger, Odetta, Harry Belafonte, Miriam Makeba, James Brown, Aaron Copland, Herbie Mann, Oscar Brown, Jr., Marvin Gaye, The Temptations, The Four Tops, Bette Midler, Horace Silver, Ahmad Jamal and Joe Henderson.

So I’m late to the game. Sorry. But I’m a fan now, and add one more name to their list of collaborators: Garland Jeffreys. Here they are doing yet another song that Dylan likely stole from some place or somebody, and one that Van Ronk recorded and often played. If it takes your memory to a scene in Brokeback Mountain, go back three spaces. 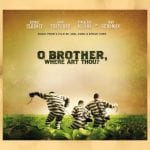 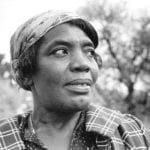 ROOTS IN THE ARCHIVE: Bessie Jones, ‘Oh Death,’ and a Story of the Supernatural