This was a welcome return to Glasgow for one of our more perplexing musicians, the Tucson-raised and now domiciled in Mexico Dan Stuart. Last time he played here, the audience turnout was pitiful, especially coming as it did only a few years after the sold-out Green On Red Reunion tour. Blame Stuart’s virtual retirement from the business or poor promotion. On this occasion, however, a packed venue bore testimony to Stuart’s once-again rising profile and the sterling work done by promoter Kevin Morris’s Fallen Angels Club, which has astutely used social media and good old-fashioned leafleting to ensure healthy turnouts for numerous shows around Glasgow.

With his last new release The Deliverance of Marlowe Billings now two years old, Stuart’s latest recorded offering was the release on Cadiz Music of two albums he recorded way back in the 1990s, now repackaged as Arizona 1993-95. For the true fans (including one chap from Croatia) the lure, apart from the show itself, was an opportunity to buy two books written by Stuart.

The Deliverance of Marlowe Billings is a warts-and-all snapshot of his early years (described as a false memoir) while Barcelona Blues is a collection of poems written while in the throes of a marital breakup, which saw him decamp to Spain for a period of time. It’s clear Stuart has been in some dark places – he’s recorded as saying his original intention when going to Mexico was to kill himself following a depressive episode (“My brain broke”). But, tonight he seems in fine form, slightly combative on stage with a dismissive attitude towards much of his past works, but engaging well with his foil and sparring partner for the evening, guitarist Antonio Gramentieri (from the Italian band, Sacri Couri). At the end of the evening he was the perfect host patiently greeting the long queue that formed as he signed his CDs and books.

With Stuart singing and playing acoustic guitar, and Gramentieri on electric, it was a mesmerising show with deadpan humour, occasional menace, and some soul baring. Ranging from the bruised tenderness of “Why I Married You” to the visceral shredding of “Jimmy Boy”, the duo’s range was astounding. Gramentieri coloured in Stuart’s musical palette with bottleneck, reverb, and barbed wire shards of noise on some of his solos. While there was a vulnerable air to Stuart as he revisited his darker times, his wild and dangerous days of Green On Red were unveiled as he grimaced and roared on epic renditions of “Jimmy Boy”, “That’s What Dreams Were Made For”, and “Sixteen Ways”. “Clean White Sheets”, from the Marlowe Billings album, had some blistering guitar from Gramentieri.

There were several newer songs, including “Why I Married You” and the Hollywood Babylon-like tale “The Day William Holden Died”. The latter relates the solitary drunken death of Holden, star of The Wild Bunch, with Stuart comparing his own lifestyle to Holden’s. With the tour posters featuring Hemingway and Barcelona Blues, not too far removed from Kerouac’s Book of Blues, Stuart certainly relates to these doomed borrachos. His delivery of the Holden song was sublime and, when caught in the moment, he almost stumbled back over the stage riser behind him. He quickly quipped “Bill just shoved me” as he recovered his balance.

Antonio Gramentieri was offered an opportunity mid-set to play some of his and Sacri Cuori’s music, reminding us of the superb soundscapes he can conjure up on six strings. Romantic with liquid notes flowing from his fingers, it was all too short before Mr. Stuart came back to tell us a little about his book. Unfortunately there were no readings from the text, but he did tantalise the audience talking about some misadventures in Edinburgh many moons ago involving spear guns in a hotel room. (For more, you’ll need to buy the book).

Throughout the show, there were humorous asides with the biggest laugh coming as he re-tuned his guitar while telling us that Jim Dickinson, legendary Memphis producer, thought that “tuning was a decadent practise of European homosexuals.”

Ending with a stomping “Hair Of The Dog” before an encore (and audience participation on) “Little Things In Life”, we had almost two hours of Dan Stuart’s life given over to us. While it may be a bit melodramatic to say so, there was a chance a few years ago that he thought he had no more time to offer. Here’s hoping that it’s not too long before we hear these new songs on a new disc. In the meantime, the tour continues on the continent with another old Green On Red buddy, Chris Cacavas, joining in some of the dates.

The opening act for the night was American songstress Kathleen Haskell. Ms. Haskell has a keen pedigree, having sung with Neil Young while her latest album was produced by none other than Dan Stuart’s old sparring buddy, Chuck Prophet. Armed only with her guitar and a wicked way with some risqué rock’n’roll anecdotes, she did a short set with the highlight being the title song of her album Where The Land Meets the Sky. It was a fine waltz that recalled a chilled out Patsy Cline, while the guitar coda was simple but captivating. “Like A Pearl Necklace” struggled to match the ribald introduction but “I’ll Be Your Fool” was a sensuous slink. And, sitting at the piano for this one, “Drama In The Dark” proved to be a fine example of L.A. noir drama. 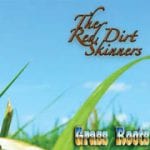