Roving troubadours Mulholland and Ward started out as youthful friends in their native Glasgow but they’ve both wandered over many miles and through several musical adventures before getting together again to record this set of songs, their mature response to the British folk of the 60s and 70s that influenced them in their youth. It’s perhaps not surprising that the recordings for this album were made in Berlin, Antwerp, Rotterdam and Port-au-Prince, reflecting as it does the footloose life that these guys – Mark Mulholland in particular – lead.

The sound of this album is defined by the interplay of acoustic guitars from the main men, with Hannes d’Hoine’s marvellous double bass playing underpinning every track. There’s a jazz style to his playing, with a warm, sinuous expressiveness that adds depth and complexity to the relatively simple structures from which many of these tracks are built. I mentioned the twin acoustic guitars leading proceedings because that is the overall impression you’re left with, but I think that’s a mandolin picking out the main theme to The Six O’Clock Whistle (an instrumental), and that sounds like an electric guitar embellishing the hypnotic Strange Place. Other instruments are available, and are used. This latter track is Craig Ward’s song, and an amazing atmosphere is built around a repeated phrase (from Hannes d’Hoine, I presume) on the double bass. It’s the beautiful meshing of the three guys playing that is captivating as warm, liquid notes somehow convey comfort but also the dark hint of something threatening, almost simultaneously. In this way, the dark beauty of Nick Drake’s music springs to mind as a reference point.

Mark Mulholland contributes the bulk of the material and, if you’ve heard his work before, you’ll probably recognise his themes. His manifesto is right there in the opening song, Something on the Breeze: “I’m looking forward to looking back on the things I’ve left behind/From somewhere a little further down the line”. Living for the moment and ever restless for new experiences, his recent adventures have landed him in Port-au-Prince and the more febrile atmosphere in the tropical heat seems to haunt more than one of these songs. Paradoxically, this seems most apparent on Icy Shivers; “things that crawl and things that bite” he sings over a dark, slow-pulsing arrangement, “It’s a long, long time till the dawn”. I’ve found it difficult to enjoy Mark Mulholland’s singing in the past (he’s not the most tuneful, really) but on this album he’s found a way to make his singing fit the arrangements that works rather well. The lyrics come over as quiet musing, a response to the dark threads of the music. And that fits the vibe of the album. One song is a setting for a text by Franketienne, a Haitian writer, and I would guess the language is Haitian Creole – no translation offered though so you just have to go with the pleasing exoticism of the experience.

Mostly, though, it’s the music that really impresses, and the more I listen, the more ambitious the whole thing sounds. Each track has been built with such care and attention to detail that it takes greater familiarity to reveal all that’s there. You get taken to some dark places along the way on this album, which makes the understated joy of The Six O’Clock Whistle a rather special and memorable way of closing the whole thing. These three guys are just embarking on a long tour with this music, and I can imagine that it’s in the nature of the beast that they’ll find new things in it every night. 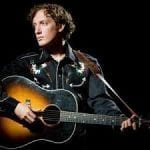 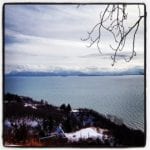