Girls Guns and Glory is a name synonymous with the rise of Americana music in Boston. That’s not to say that they single-handedly started the trend in our fine city, but they certainly had a few fingers in cookie jar, if you can dig what I am saying. Ward Hayden has been the strong thread in the fabric of this band from the get-go and with a changing cast of characters over the years has always stuck to his vision of the band, but adapting the changing landscape and his growth as a songwriter. These guys have always been a band that I looked to for guidance and had a great respect for. Hayden is a guy who sticks to his guns and doesn’t apologize for the music he is making. Music with an edge, that harkens back to a time when country music didn’t drop the “o” in its spelling. Ward was kind enough to take a few minutes from the boy’s relentless touring schedule to answer a couple of our questions for our NEA Featured Artist…check it out.

1)      First and foremost, who are you, what do you do? That is, what band are you in or are you a solo artist, what have you guys been up to leading up to the festival, anything exciting we should all know about? Your chance for shameless self promotion…go!
My band is Girls Guns & Glory, we are based right here in Boston, MA.
We are about to release our 5th studio album in a few months, recorded in Brooklyn, NY with Eric “Roscoe” Ambel (Steve Earle, The Del-Lords, The Bottle Rockets, etc).
And we’ll be performing all around the Northeast this Fall including bringing out Tribute to Hank Williams to Cambridge, MA on New Years Eve & New Years Day at the Lizard Lounge.
2)      New England Americana and the Fest firmly plant their roots and morals in “community”. The event is a culmination of a community of musicians and artists that is going on all year. What does that community mean to you?
The community is everything. Seeing how much the NEAF has grown in the past few years & how much the Americana

scene has developed and blossomed in Boston because of it has been so impressive. People don’t sheepishly say they play Country music around here, now they wear it like a bandage of honor. This festival makes you feel like you’re a part of something special, something inclusive, something that has the framework to support itself from within as well as from outside fan support. It’s become sustainable.
3)      Name a record that shaped you as a musician early on. What music initially made you want to sing, or pick up an instrument and make music?
Johnny Cash’s “Unchained” album is still one of my favorites and was the album that made me feel like I had to make music of my own.
The sparse, yet powerful arrangements & the power and conviction of his voice. I think that album will stand the test of time. 50 years from now people are gonna listen to and be moved by his performance on those songs. A prime example of how less is more.
4)      What are you listening to now that you think folks should be aware of?
Sturgill Simpson’s new album “High Top Mountain” is so good. One of the coolest albums I’ve heard it a while. Originally out of Lexington, KY he moved to Nashville a couple years ago. This album, to me, is what I hope to hear more of in the future. This is a real country album, no million dollar production, no bubblegum pop with twang, this is authentic. Sounds like it could’ve been made 40 years ago.
5)      Music  festivals, in general,  are fairly well known for surprise sit ins, improvisational jams and collaborations. If you could see any two of this year’s acts collaborate on stage at this year’s NEA Festival, who would you like to see?
I’d like to see Brian Carroll sit in with everybody. Brian is a great guy, great musician and great community builder. His chops on the mandolin have grown exponentially over the past couple years. I think he’s gonna continue to be a go to guy for mandolin in Boston for years to come. 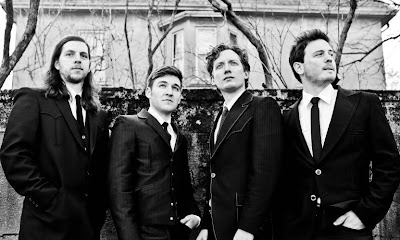 6)      Why is creating music important to you? Why do you pick up your instrument and write songs? Why do you play that dive bar on a Thursday night? What keeps you going?
The only thing I can think of is insanity. Or possibly that I’m just not good at anything else. When making music is the path, you have no choice, but to follow it.

You know the drill kids, GGG is online at www.girlsgunsandglory.com and be sure to check them out at this year’s festival. They are anchoring the Brattle Stage on Sunday (Sept. 29th) at 5:10 PM. Sure to be a hell of a set, so bring your dancing shoes and a partner!