With a population just shy of 18,000 people Salmon Arm is about a five hour drive from Vancouver, BC. Surrounded by lakes and known as the “houseboat capital of the world” it’s also been home to the largest roots & blues festival in Western Canada for 21 years now. The 2013 edition ran from August 16th – August 18th.

The Salmon Arm Roots & Blues Festival’s history means that it attracts a level of talent and fame that the city wouldn’t normally attract. Previous headliners have included internationally known acts like the Neville Brothers, Johnny Winter, and the Downchild Blues Band. It’s part of the special nature of a festival like this that takes over the entire town–attendance at the festival can be higher than the population of the entire town.

I arrived late on Friday night to the reggae sounds of Ky-Mani Marley wafting through the summer sky, playing to an audience that had obviously been having a good time all day. Marley’s set was followed by Germany’s Corvus Corvax–an experience that I’m not sure how to describe. The heavily costumed band has been exploring medieval musical traditions for years and play instruments that look like nothing you’ll see elsewhere: it was a compelling and unique way to kick off the festival.

The festival’s first full day was originally forecast with a threat of rain but dawned bright and blue and stayed that way all day. This was good news for the many artists playing the side stages throughout the day. Cam Penner played a particularly standout set at the festival’s Shade Stage. Penner’s enthusiasm for being there–“To tell you the truth, we’re just really fucking happy here” he told the crowd at one point–was shared by the audience and the inciteful lyrical nature of his acoustic guitar driven folk rock demonstrated a talent worth watching.

Penner was followed by Saltspring Island’s Harry Manx. Manx’s reputation is well established, and the crowd grew substantially for this show. Alternating between an array of stringed instruments, Manx played a virtuoso hour long set of music that wasn’t to be missed. Leading with a rendition of Van Morrison’s Crazy Love played on the guitar-like Mohan Veena the music took the audience down Manx’s unique blend of eastern and western musical stylings and made for a perfect afternoon.

By the time night fell the crowd on the festival grounds–no doubt buoyed by the gorgeous sunny weather–had grown substantially as Bruce Cockburn’s main stage performance approached. The legendary Canadian singer-songwriter has been touring in support of his most recent album Small Source of Comfort but played a set that drew from his extensive career. Iris of the World lead to 1999’s When You Give it Away and then into his classic Tokyo from 1979 followed by a fast paced rendition of Lovers in Dangerous Time–probably Cockburn’s most recognizable song to the younger members of the audience, thanks in no small part to a Barenaked Ladies cover that’s about twenty years old now.

Cockburn threw the stage to Jenny Scheinman on the fiddle, announcing that “We’re gonna play a Jenny Scheinman song now.” Scheinman’s Littlest Prisoner was a nice interlude to the set. The dark overtones of its lyrics (“I could’ve been a teacher / I could’ve been a cop / but I sucked on cocaine / like it was cherry pop”) made a good match for the topical nature of Cockburn’s music.

A stirring live crowd singalong version Wondering Where the Lions Are–a song Cockburn jokes is “…probably the only song with the word petroglyphs in it to make the Billboard charts”–followed. Accompanied not only by the several thousand crowd members but by virtually every musician from earlier in the day standing at the side of the stage, Lions’ became one of those special moments that will be remembered long after the end of the weekend.

At 68 years old, Bruce Cockburn delivered a strong set which was the equal of those performed by other artists throughout the day half his age. Cockburn’s always been an overtly political singers and songs like Call it Democracy (with its message that “See the paid-off local bottom feeders / Passing themselves off as leaders”) ring as true today as they ever have. It’s a testament to his talent and skill as a songwriter–but a sad statement on the world that we live in–that the message remains as applicable today as it ever has.

Half way through the 2013 Salmon Arm Roots & Blues Festival the weather’s been great, the line up of artists has been solid and there’s still a day let. Sunday’s edition of the show features workshops and side stage performances all day and closes the main stage with performances by Daniel Lanois followed by City & Colour. Nicely done, Salmon Arm. I can see why people come this show every year.

The Salmon Arm Roots & Blues Festival happens on the third weekend in August every year and runs from the Friday to the Sunday. Camping is available on site from Thursday to Sunday night. 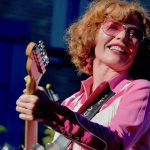 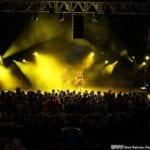