Making his third visit to the Rocky Mountain Folks Festival, Amos Lee was on his way to another workmanlike performance as the closing act on a fun-filled Saturday. The Philly steak, rattle and soul brother already had the sold-out crowd on his side, and everyone would have gone home thoroughly entertained, satisfied and, quite possibly, even inspired.

Then Lee introduced Bella Betts to the stage, and in that instant the lives of everyone in attendance changed for the better. Her 11-minute spontaneous appearance with Lee on August 18 wasn’t just the feel-good moment of the festival, which until then often lacked the spirit of collaborative camaraderie among other bands that makes the Telluride Bluegrass Festival so fascinating.

A former schoolteacher who’s seemingly just a mellow guy with jam-band tendencies (Lee played in the artists tent after his set until 4 a.m.) teaming up with a spunky little girl who loves animals and raises chickens became a shining example of how music, especially live music, has the powerful ability to restore your faith in mankind if there were ever any doubts.

Bella (left) is an 11-year-old mandolin player who lives in Boulder, Colorado, just a few miles down the road from Lyons, the home of Planet Bluegrass, which holds its Song School during the week leading up to the yearly festival.

At the recommendation of Planet Bluegrass co-founder and vice president Steve Szymanski, who also runs the RockyGrass Academy held in conjunction with the more traditional bluegrass festival in Lyons every July, Bella attended the Song School last week as its youngest student.

Now a veteran artist as accomplished as the 35-year-old Lee doesn’t just share the stage with anybody, no matter how sweet and precocious they may appear to be.

A mutual friendship with Tomago Collins involving Lee and Bella’s parents — Mona Esposito and Richard Betts (a master sommelier not to be confused with the Allman Brothers guitarist) — helped bring the two musicians together earlier that day.

After seeing some YouTube videos of Bella performing, Lee invited her to jam with his band during rehearsal. When she took a few solo runs through Steve Earle’s “The Mountain,” Lee decided Bella had the musical chops that led to the all-that-is-good-about-music performance about 40 minutes into his set.

“We’ve got a friend of ours who’s here tonight,” Lee said in a soothing voice that any DJ would deal with the devil to acquire. “We were hanging out earlier today, chillin’, listening to some crazy music. I want to invite my friend Bella to the stage. … Give her some love, ya’ll, c’mon,”

The two played side by side as Lee discreetly directed Bella through “Bottom of the Barrel” from his 2005 debut album, then a version of “The Mountain” they learned from Levon Helm’s recording of the Earle tune that appears on Dirt Farmer.

“Bella’s following me, so if she makes a mistake, it’s my fault, ’cause I don’t know these songs that well,” Lee said with a chuckle after their first collaboration. He proved that by adding, “This is a song called — what’s it called? — it’s ‘Mountain,’ right? … I never know the title. ‘The Mountain’ is an incredible song.”

With that, some of the loudest cheers of the night came as Bella hit all the right mandolin notes on her solo turns, smiling throughout while looking remarkably poised for a tween playing before the biggest audience of a career that’s just blooming. Lee’s calming influence was touching and endearing, and they happily shared fist bumps and a hug before Bella took her front-row seat alongside mom, then returned to take a final bow with the band at the end of the show.

“I get very nervous when I sit in with someone and not at all nervous about the music,” Bella wrote days later in an email sent by her mother.  “I sat backstage waiting to be called up and tried not to think about everything that could go wrong that has nothing to do with the music and failed.  With lots of encouragement from friends and my mom, I waited out the waiting part and had fun from the moment I started playing on stage. Amos was super encouraging and hopes to have me play with them again. I hope so, too!”

You might be tempted to think: “Kids, don’t try this at home,” and you’d probably be right — unless they are potential child prodigies.

While still a youngster (who turns 12 on September 13), Bella already is a seasoned performer. Homeschooled by Esposito (who plays the piano, began taking guitar lessons with her then-5-year-old daughter, then recently started pounding the drums), Bella picked up the mandolin and fiddle four years ago. The family moved to Boulder from Bella’s hometown of Aspen in summer 2008, and soon afterward she attended the RockyGrass Academy, returning every year since then.

She first played on the main stage between RockyGrass sets at age 9, has performed with Langhorne Slim at the Fox Theatre in Boulder and the Bluebird Theater in Denver and joined Chris Thile for a song at the Steaming Bean coffeehouse in Telluride.

“Her bluegrass chops are impressive, but lately she has been focusing on her singing and songwriting,” said Szymanski, who will be involved in the making of Bella’s first album this fall. “I’m encouraging her to write as much as possible for her recording (successfully funded through a Kickstarter campaign) so we have original material to work with. … And I must say she’s remarkably focused and mature and we have had a fun time working together so far.”

The Song School was a five-day sold-out session this year that included songwriting instructors such as Mary Gauthier and 2012 festival performers Holly Near, Gretchen Peters, Peter Himmelman, Darrell Scott and Richard Shindell. Attending “was the best thing I have ever done,” said Bella of the flexible, elective-based program on the 15-acre Planet Bluegrass Ranch that’s open to all ages and skill levels.

Her mother should know. “The Song School was a real culmination for her,” said Esposito, who performs regularly with her daughter at an assisted living center in Boulder and backs her up during occasional mall appearances. “She has been writing her own songs and with the combination of the instrumental work she has been doing and the amazing people at Song School supporting her songwriting, things really came together. I have to say that what happens at Planet Bluegrass is really magical — it’s an amazing community that comes together there.”

No wonder that, while Lee was tuning up a few minutes after his special guest departed, a voice in the crowd shouted, “More Bella!”

“Yeah, right, exactly,” laughed Lee, whose good-natured rapport with the audience was another nice touch on a picture-perfect day when the foursome from Girlyman and Kasey Chambers and a trio that included her father Bill were just as entertaining.

“I’m sure you’ll be seeing plenty of her,” Lee said of his new playing partner, even if it was for only 11 precious minutes. “She’s going to be owning this stage. She can probably own it now.”

Rocky Mountain Folks Festival photos by Michael Bialas. See more of Amos Lee and Bella Betts on Day 2, along with other featured performers from all three days. 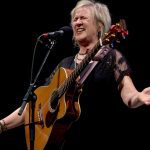