In my prior post, I left off having just finished an inspiring set by Loretta Lynn.  As the set concluded, my cohort and I decided to grab a bag of ice and head back to camp for an evening cocktail and a bit of rest in the cooler night air.   We opted to take the dusty trails around the perimeter of Centeroo to avoid the swarming crowds for the Black Keys on the largest What Stage.  We could still hear the dirty blues licks and cacophonous drumming of the Keys in its full glory as we made our way around.  We stopped for awhile to listen as we watched the big screen from outside of the chain link barricades.  It seemed like a backwoods drive-in movie with an overgrown sound system.

As we unwound from a long, hot day and tried to recover from the lack of sleep the prior night, I was still a little bit giddy to see the big New Orleans set later in the evening despite my exhaustion.  After some chatting and campsite banjo picking, I threw my mat on the ground for what I hoped would be a short nap.  Soon thereafter, a mild thunderstorm lit up the sky and rain trickled down.  I was in heaven.  I just lay there enjoying the cool rain, listening to the music echo around the claps of thunder.  Eventually, I drifted off only to be awoken by fireworks so loud they were setting off car alarms along the campsite.  Uh oh.  It was the Bonnaroo alarm clock reminding me that I was about to miss Dr. John.

We woke up, wiped the sleep from our eyes ready to dash over to That Tent for a great big stew of New Orleans funk and soul.  Or so we thought.  The crowds were so intense due to the late night sets of Eminem, Buffalo Springfield, and String Cheese Incident, that we found ourselves stuck in a cattle herd.  Eventually, we made our way to the stage to catch a few of the Meters final tunes.  After a long set break, Dr. John took the stage with the venerable Allen Toussaint.  The crowd was larger than expected, but we eventually made our way to a fairly close spot, and despite my aching feet, I found the energy to dance, clap, and sing along to the wetlands rhythms and Dr. John’s inimitable N’orleans drawl.  Toussaint was as elegant as he could be, dressed in a blue silk suit behind his grand piano.  Both of these men are institutions unto themselves, and I hated to hear the boogie-woogie blues and swampy beats come to an end.

We moved to the side of the stage with huge smiles on our faces, letting all of those good feelings simmer in the 2 AM air.  Just a moment later, a man with dreadlocks down to his knees began jumping around excitedly.  He was pointing behind the barricade next to the stage.  Talking on a cellphone, he was screaming, “Baby, you have GOT to come over here now!  Oh shit!  Get over here!”  I looked in the direction of his pointing and saw the top of a tuba with the famous hand painted lettering “Preservation Band.”  I heard a few notes from the tuba and a trombone running through scales as some percussion began to kick in.  “Oh shit,” is right.  I was about to be part of a second line parade through Bonnaroo!  I had no idea this was going to happen and actually got a little emotional as the barricades were moved, and the band began marching into a jubilant, joyful crowd.

We followed the parade dancing, laughing, and just shaking our heads at our good fortune.  As the parade snaked though the complex, it was magical to watch the people in crowds ahead of us turn around, rub their eyes, and do a double take as they realized that one of America’s most unique cultural traditions was headed right for them.  No doubt, this was the highlight of my weekend.

After about a half hour of following and dancing, we decided to make our way over the Other Tent to catch the Gogol Bordello set.  Gogol is a band I’ve long been aware of, but never made the effort to explore.  As we approached a packed tent and a huge crowd spilling into the outer field, I realized quickly what I had been missing.  The manic energy of the band is otherworldly.  Or multi-worldly, as the hybrid riffs from Eastern European gypsy music collided with dub beats, punk rock, polkas, funk, and about anything else you could imagine.  The band is like taking a well-curated independent record store and throwing every CD from every genre into a blender before topping the gritty frappe with a large dose of militant leftist anthems to tie the dish together.  They must be superhuman as well, because the kinetic electricity of their set never faded even into the wee hours of the morning.  At least three very extended encores were played as the crowd simply would not quit demanding the party continue.  Finally, a little after 4 AM, the band presumably collapsed backstage and were immediately given IV drips and other medical attention.  At least they should have.

As we slowly made our way back to camp, we passed That Tent where the improvisational electronica band STS9 were still going strong, playing a tune that reminded me of Phish filtered through arty German dance music.  At least that’s what it sounded like to me at 4:30 AM going on only a couple of hours sleep in the last forty-eight hours.

Back at camp, we watched the sky gradually brighten into a peaceful Sunday morning.  I was almost too exhausted to sleep, my head crammed full of resonating rhythms, riffs, and melodies the world over.  We sat in portable chairs eating apples, barely speaking except to smile and whisper what a great day it had been.  Finally, I laid back down on the ground with my camping mat and eventually caught a tiny bit of sleep before the morning activity and warm sun wouldn’t let me lay around any longer.  I felt almost hallucinatory as my body tried to process the incompatibility of a peaceful sense of interior nourishment with that of external pain and abuse.  It was Sunday morning, and I had hardly slept since Thursday night.  As much as I wanted to push through for the gospel service of Mavis Staples in about four hours, I knew it was a futile pursuit.  It was already too hot to sleep at 9 AM, and the idea of toiling in the sun for hours still just seemed like a physical impossibility.  We decided to head for home.

After packing our bags and indulging bourgeois dreams of couches in air-conditioned homes, we hopped in the car, turned the key, and were ready to leave this wonderfully bizarre oasis.  Click.  Click. Click, click, click.  Dead battery.  Several tries at jumping the car didn’t work.  We were stuck.  We contemplated staying, until our extremely kind camping neighbors offered to run us into town to replace the toasted battery.  We gratefully accepted, and found ourselves on our way home a little after noon.  I somehow managed to drive my cohort’s van back home to Nashville without any traffic violations or car wrecks.  The only bodily harm we suffered was extreme sunburn, dehydration, and minor hallucinations from sleep deprivation.  I salute the brave souls who endured the festival from beginning to end.  I am not worthy, but I might just be back next year anyway. 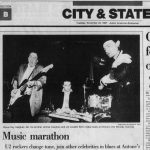 ‘Okay, Edge, Play the Blues!’: An Oral History of the Night U2 Jammed With Stevie Ray Vaughan at Antone’s