I’m passionate, nay even evangelistic about House Concerts! Not only because this is the best way possible to experience acoustic music, (IE acoustically) secondly because its winning back the living room for live music, displacing the TV, even eclipsing the computer all be it for only one night, but in the wider scheme of things thirdly and more importantly they have become part of the the antidote to the withering creative poison that is Clear Channel’s monopoly driven corporate branded live music venue world we now are stuck with.

House Concerts, semi pro run listening room venues and concert series are the best alternative to that mass induced arbitration of taste available to the growing number of professional independently minded musician that aren’t lucky enough to have the big budget clout of a record label elbowing them into this world.

Particularly as the original tradition (with a small T) Folk Clubs are generally struggling to bring in new blood to keep them going, getting even more blinkered in their booking policy to new music and going more reactionary Tradition (with a large T) in the effort to keep the doors open and appeal to their sadly diminishing core customers, understandable but not conjunctive to our new and current crop of increasingly creatively vibrant, post internet, free form, social networking savvy, eclectic music makers. I’m convinced House Concerts by their very nature are the solution, everyone run by a fan and everyone with a unique  atmosphere created by that fan and her/his friends and their favourite artists .

On the 7th January it is our 5th Birthday at The House Concert Hub, our community may well have achieved 2000 members by then (teetering on the brink as the new year turns), in those 5 years together we’ve helped organise hundreds of gigs and helped make just as many tours feasible, as well as helped bring the music we love to more people who love music.  It turned out to be a particularly good new years resolution that one.

I really do feel you good folks out there who are doing so much for so little for the music we love deserve some national recognition, so hope this article in some small measure does address that need, however I’m very aware we all need to get more folks engaged in this movement to sustain the growth of every cottage industry that is “the songwriter” in the post record company dominated music business of the modern age.

There are still folks at least on this side of the pond who would help who have never heard of the concept of House Concerts, particularly in the Folk/world/jazz/classical music sectors, and many of a certain age (my age) who may now have more recreational time, the kids have grown and flown and retirement is increasingly an exciting (or otherwise) option, leaving them with a bigger houses than they might need, and the resources and socialising structure that would sustain a right good music scene with some considerable effort true, but no expense, if only they knew what they were missing out on.

I bet just about everyone reading this would be amazed at who would come and play in their front room for their family friends and selected fans, with some organisation and natural hospitality.

Iv heard of house concerts in mountain bike and skate board shops, in shared flats and halls of residences this year too, and couch surfers are increasingly more in the vanguard of the movement now, with Musicians hoping couches across the continent and playing shows to pay their way as they go.

I’m here to encourage and coach anyone who may be interested in this new way, that’s what I perceive my main roll to be in all of this as a veteran of some 8 years hosting hoosys and 30 year promoting gigs here in Scotland.

I really do need help to reach those people though, not all but the most intrepid will visit ND, FSR or the House Concert Hub or read a Rob Ellen facebook posts, so your help is required for this.

Simply open this open letter for comment by sharing on face book, twitter, gmail, pinterest, linkedin, etc etc email even!! (do you remember email?) particularly that friend who would thank you to hear of an album you just bought that has blown you away or hear of that artist on the telly who they should open the iplayer for, preferably with a bigger house than you.

House Concerts and our community hub are still perceived predominantly as a domain of American Roots music, sure its an American concept and the American artists have taken very naturally to playing them on both sides of the great divide. However I think that perception is limiting the vision in the extreme, but there are signs everyone else is now starting to catch up. I don’t see why African, Indian, Bulgarian, Celtic artists and small combos even string quartets and Jazz combos can’t do House Concerts, the sky’s the limit, everyone with a house is a potential host, and every artists facebook friend is a potential gig.

That’s the message that needs to get out, will you please help?

Let make 2014 the year of the house concert.

To illustrate further and further the cause we present the House Concert Hubs January Single from the forthcoming 5th Birthday CD, donated by the indie music legend that is poet, painter, songwriter Jon Langford (The 3 Johns, The Mekons, The Sadies, Blood Shot Records)

Just the thought that you can now invite someone like Jon Langford into your home to share all the experience and magic of a life time in music , is a wonder of this modern age for this pilgrim.

From the fourth coming 5th Birthday Collection CD, more info Click Here. Jon is currently available for House Concerts. click here Please do download this track (only £1) or send to a House Concert or Jon Langford fan. Every penny helps keep the wheels on the Hub & artists on the road. 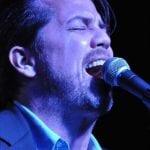 Videopoem reviews The Sadies at The Mercury Lounge in NYC