There’s Charlie Musslewhite, and then there’s other guys with harps. You know who it is as soon as his lips start the reeds a-quiverin’. Accept no substitutes. His newest release, I Ain’t Lyin’, ably demonstrates that the 71-year-old harpist still has no equal.

Musselwhite’s not the only bad ass on this release. Matt Stubbs’ guitar crackles with electricity, shimmying around the melody as June Core’s drums pound out tribal rhythms on “Good Blues Tonight,” a funky samba with a Bo Diddley backbeat. But there’s no doubt who’s the main attraction. Musselwhite just kills it every time he steps up to the mic. Good Lawd, it’s good.

The record is a cache of 10 originals and 2 covers. On his  cover of Elmore James’ “Done Somebody Wrong,” Musselwhite’s vocals sound like Johnny Winter. The version here is more fluid than James’ original, thanks to Steve Froberg’s funky bassline and Stubbs picking out the melody with steely clanks instead of James’ greasy slide.

The other cover is a tune the harpist often uses as an encore on his live show. Included on his ’67 debut album, Stand Back! Here Comes Charlie Mussselwhite’s Southside Band, and as an extended version on 1969’s Tennessee Woman, “Christo Redentor” was inspired by the statue of Jesus that overlooks Rio de Janeiro.

Sandwiched in between are a cache of tasty originals. “Long Lean Lanky  Mama” is a swingy shuffle with a rockabilly taint courtesy of  Stubbs. Musselwhite knits it together with harp work that’s crisp and clear as a mountain stream.

Even when the subject matter is as low-down and lonesome as it is on “Always Been Your Friend,” Musselwhite’s phrasing gives it a classy upgrade. But as his friend Mac Rebennack once told him when Musselwhite was talking about doing a Hank Williams tune: “Charlie, everything you play comes out blues.”

Musselwhite keeps the blues faucet open with “If I Should Have Bad Luck,” his harp passages so fluid that a two-minute solo glides by too quickly and you find yourself wanting seconds as soon as it stops.

The harpist goes on  a reed-bending spree on “Blues Why Do You Worry Me.” Stubbs changes the scene a bit by dropping in some twangy  rockabilly licks, but Musslewhite  keeps it rooted in back alleys of Chicago with his harp.

The album finishes off with an unedited reprise of the opener “Good Blues Tonight.” You get another minute and a half of Mussselwhite goodness, a few more of Stubb’s barbed-wire guitar licks. With some artists, you ‘d consider it filler. But as long as Charlie Musselwhite’s at the helm, there’s never too much of a good thing. 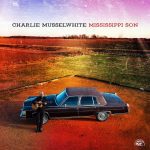