While not necessarily triggering any specific imagery, the album title says it all. Though I’m still unsure of exactly what the intended conveyance is, it’s nonetheless one hell of a metaphor. And one hell of a lyric. And it’s just one example of the allusive wordplay Josh Rouse employs throughout his very impressive out-of-nowhere debut.

“We could move back to the suburbs/Rent a house, change our name/If you could only find a purpose/If you could only stay the same” the Nebraska native pleads over an expansive soundscape of drums, bass, noir guitar, organ and cello before breathlessly finishing the thought with “I could help you open and unfurl.” It’s a exasperatingly beautiful sentiment on the elegant opening track, “Suburban Sweetheart”, and is a sign of everything that is soon to come.

Rouse’s songwriting style defers to verbal snapshots of moments in time rather than drawn-out storytelling; his vocals are always imbued with a sense of raggedly honest emotion. “Happy and willing to die/For your love,” he somberly trails off in “The White Trash Period Of My Life”. The prevailing anguish doesn’t even allow him the strength to properly finish the line, all the time painfully aware of what is ultimately a non-decision.

Everything about this record, from the artwork’s period photographs to song titles such as “Reminiscent” and “A Simple Thing” to the luxurious production, is awash in moody rural flatland ambiance. Rouse and co-producer/multi-instrumentalist/most valuable player David Henry have created a musical backdrop that mixes the intricate arrangements of fellow Cornhuskers Lullaby For The Working Class (the cello, the trumpet, the violin) with the “flatter than a tabletop” heartland-rock of James McMurtry. Throw in a bit of Spain, along with the obligatory Nick Drake reference, and you’re probably left…confused. But don’t worry, it all works magnificently. 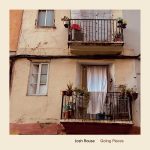