Gram Parsons has yet to be honored by a Country Music Hall of Fame induction. Whether or not this is an over site or slap in the face to the Sin City Sound,  it seems Nashville’s hesitation to pay the Fallen Angel well deserved respect, may be rooted in the fact that many view him simply as Hollywood’s version of Country (even though he was a real Southerner who made his way out here). But, rock-star glam and Nudie suits aside, Parsons had the goods to back up the look and attitude. Without him, Los Angeles wouldn’t have the strong Country scene or defining sound that it prides itself on today.

What Gram Parsons did for Los Angeles, is on par with what Merle Haggard did for Bakersfield and neither of them ever conceded to what was going on in Music City, because for the most part, it wasn’t real Country and what they played was. Whether the objections that Parsons’ image was contrived or strategic, are true, it doesn’t matter. Gram Parsons  brought the Honky-Tonk to Tinsel Town and born from his vision of Cosmic American Music, is a tradition that is undoubtedly our own. 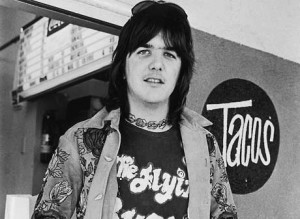 Over the course of only five years, Parsons established a musical genre, saw the twangy shift in California Rock with the Byrds’ (commercial failure but retrospectively masterpiece) Sweetheart of the Rodeo, influenced the likes of Rick Nelson, Michael Nesmith and Poco (among others), in addition to recording five classic albums (Safe at Home,  The Gilded Place of Sin, Burrito Deluxe, GP, Grievous Angel) and helping Emmylou Harris achieve her slot as Queen of Country harmonies.

With that said, it seems only logical that anyone who was able to accomplish such feats before an untimely death at the age of 26, should be celebrated wherever it seem fit. Though early on, Gram may have taken cues from Hank Williams, he rather unintentionally  followed in the footsteps of his idol.  But like Williams, he is yet another example of a Legend who proves that in some cases, if one’s body of work is so immediately remarkable, it may indeed be better to burn out than fade away. Because,  Parsons is the rare sort of force who created such an astonishing burst of art, that it has as marked a presence today as ever.

No better example of this, are his disciples – the new generation of artists emerging out of LA (Mark W. Lennon, The Far West, I See Hawks in LA, Paladino, LA Hootenanny) who prove not only that we have a strong voice in what today is labeled ‘Americana,’ but that we truly are a city united by Gram.  With the exception of perhaps Brian Wilson (Beach Boys), there isn’t a single musician of the 1960s whose sound is as widely heard now or as definitely Angeleno as that of Parsons’.

So, if it truly is the case that Nashville is intentionally excluding Parsons, then not only do they not respect him, they don’t respect us. If that is the case, maybe we’re Outlaws here in the Wild West. But most importantly, we produce good music and that is far more important than any accolade, due or not.

In support not only of Gram Parsons, but Los Angeles Music in general, please sign the petition to get him inducted into the Country Music Hall of Fame:  http://gramparsonspetition.com

In an effort to help the cause, Gram Parsons has been given the title of  Turnstyled, Junkpiled’s “Pimp of The Week.”