Chronicling the disastrous exploration of Antarctica from 1914-1917 by British adventurer, Sir Ernest Shackleton, HAVE GUN, WILL TRAVEL’s concept album, Science From an Easy Chair, tackles history with humanity, in a surprisingly catchy Americana album.  Their latest video commemorates the life of the expedition’s lead sled dog, Shakespeare, with a fan-sourced photo album of favorite dogs, now and forever.  As many canine-lovers say, “I’ve loved some of my dogs more than I’ve loved some of my family members.”

HAVE GUN, WILL TRAVEL (named after the vintage TV show) have had songs featured in Chevy TV ads, as well as the PBS series Roadtrip Nation, CBS’s The Good Wife, and Travel Channel’s Expedition Unknown. “Their music has a great energy to it with infectious, sing-along choruses and refrains” remarked NPR’s Robin Hilton. American Songwriter magazine called HGWT’s music “organic, infectious Americana Pop. Their music has a refreshing immediacy to it.”

Jason Boland and The Stragglers Combine Cowboys, Aliens, and Big Questions of the Universe 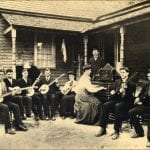