1. Hard to believe it has been almost eleven years since Car Wheels on a Gravel Road came out. Lucinda had been better known for writing “Passionate Kisses”, covered by Mary Chapin Carpenter, until this bombshell hit stores. Seeming to sum up all the heartbreak Louisiana could hold, Lucinda’s landmark album immediately entered the canon of all-time great roots records, while getting plenty of mainstream attention as well. For roots fans, this was no surprise, as Lu had been putting out great records like Happy Woman Blues and her magnificent self-titled record for more than a decade. For all of it’s successes, this record had a hard time making it to the shelves. After tossing out the original recordings done in Austin with Morlix, she went to Nashville to try it out with Steve Earle and Ray Kennedy, his production partner. Earle managed to rough up the tracks a bit before becoming increasingly unreliable due to substance abuse, at which point Lu took the tapes out to Los Angeles to record with longtime E Street piano whiz Roy “the Professor” Bittan. I managed to find the alternate versions in a Nashville used record store and took it to be the record, which I liked. Once I heard the version she released, all the songs bloomed into Technicolor and I was hooked.

2. Opening with the stunning trio of “Right in Time”, the title track, and the surprisingly-not-a-Prince-song “2 Kool 2 B 4-Gotten”, Williams swaggered with all the energy and rumble of a Lake Charles juke joint. I remember hearing her moan “Oooooohhhhhh my baby” from the opening track, knowing I didn’t know many women who made noises like that. The primal instinct is what makes this record – the stomping, self-loathing “Cant Let Go”, which features slide from both Gurf Morlix and Johnny Lee Schell has a jilted, guttural drawl to it, though it is the only song Williams didn’t have a hand in writing. Using imagery like the “big chain” around her neck and being shot but she “didn’t fall down”, Lu doesn’t attempt to cover her wounded heart. In the swinging “Still I Long For Your Kiss”, she admits “I know I shouldn’t but/ I want you so bad”, exuding all the rough-around-the-edges honesty of a Larry Brown heroine.

3. The cover of this record sets the landscape Lucinda describes in the title track, rolling out the Southern countryside like a Flannery O’Connor novel. She pieces together the memories like a child who can’t quite see over the car seat, hearing the “low hum of voices in the front seat” and “Hank’s voice on the radio”, while Buddy Miller’s mandolin and background vocals give this track a certain amount of bounce, like driving down a barely paved street. For someone who grew up in the deep south, Lucinda has managed to epitomize the experience of growing up in an oppressively hot, slow moving town and the very real, albeit universal feelings of longing that come from a one-sided love.

Colin O’Brien: Banjo on My Mind 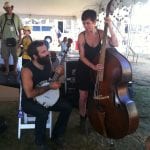 Life At the Edge