Bob Dylan turns seventy on Tuesday, May 24th.  The man that crossed generations and musical genres as a songwriter, a poet, a recording artist, and a performer is the mightiest sequoia of his time. His influence not only touched his peers, but a long list of musicians and songwriters which continues to grow some fifty years since his first recordings.

I grew up listening to “Blown’ in the Wind” and playing my sister’s Peter, Paul & Mary records.  I remember the day John F. Kennedy was shot and soon after heard “The Times They Are A-Changin’” playing on the AM
radio. My office wall is adorned by the album art of those iconic images from that Lp along with The Freewheelin’ Bob Dylan, Bringing it All Back Home, Highway 61 Revisited, and Nashville Skyline.  When many rock ‘n roll icons were tragically lost in the early seventies, who could imagine that at age 70, we would be here discussing the next great Dylan album being released as a digital download.

There are so many great Dylan songs, just their titles alone are a statement.  Songs like “I Shall Be Released”, “Forever Young”, “Knockin’ on Heaven’s Door”, and “With God on Our Side” have inspirational messages.   Political rallies have rang the bells of “Chimes of Freedom” and “Masters of War”,  while others  have been covered and made into big hits like  “Mr. Tamborine Man” and “You Ain’t Goin’ Nowhere”.  Another Side of Bob Dylan was released in 1964, but little did the listener know that they would see many different colors of the chameleon Dylan.  The folksinger shook the world with those big opening electric chords on “Like a Rolling Stone”, the Nashville influences of “Lay, Lady Lay”, the religious path of “Gotta Serve Somebody”, to the current bluesy balladeer on “Things Have Changed”. 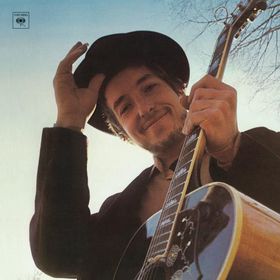 Dylan is like a very long novel.  If you take shortcuts, you may miss some of the most important parts of the story.  So, don’t settle on covering the bases by buying a greatest hits package or purchasing songs on iTunes.  Dylan was meant to be held in your hands in either the classic vinyl or compact disc version so you can stare into the album art while the record plays from beginning to end.  Read the linear notes or better yet, read the lyrics as you purge yourself into the Dylan abyss.

One exceptional addition and personal favorite to the Dylan catalogue is the 30th Anniversary Concert Celebration in 1992 that at the time celebrated Dylan’s 30 years of recording released on two discs.  If you can find a VHS or DVD version of the all-star pay-per-view show, you will see one of the greatest guitar performances on “My Back Pages” with Roger McGuinn, Tom Petty, Neil Young, Eric Clapton, and George Harrison all taking a turn at the microphone with Bob.  This particular song has one of those classic Dylan phrases that I tend to use as my signature refrain about life and the path I have traveled:  Good and bad, I define these terms   Quite clear, no doubt, somehow    Ah, but I was so much older then   I’m younger than that now….

Thanks Uncle Bob and Happy Birthday to you.

Would Tom Waits Win “The Voice?”