Welcome to the front porch of The Real Easy Ed, where each week I curate, aggregate and update news, events, images, ideas, sound, fury, odds and ends. Just a little place to pause for a few minutes, get out of the sun and cool down.

And when I say ‘new’ I mean new to me. There’s also good chance it might be new to you too. Seems like on any given week there are hundreds of websites all talking about the same three or four titles. I could follow that path, but it seems pointless. Sometimes I’d rather just offer up music that might have slipped through the cracks or is far from the beaten path.

This week I want to talk about an album that was released last November. Brennen Leigh Sings Lefty Frizzell is a project from an Austin-based musician and songwriter whom I admittedly had never had heard of until recently. Check this out.

A founding member of the band High Plains Jamboree, she tours throughout Texas and across America often with her frequent writing and touring partner, guitarist Noel McKay. In her travels and tours in Europe, Scandinavia and South America, she has slid into that cult status zone. Her songs have been recorded by Sunny Sweeney, The Carper Family, Norway’s Liv Marit Wedvik, and Lee Ann Womack. She has also collaborated with Jim Lauderdale, John Scott Sherrill and David Olney.

My friend Terry Roland did a story on her for No Depression last year, so I’ll let him do the heavy lifting:

Brennen Leigh is not a household name. Her 2009 solo album, The Box, stands as a classic of the form, with original songs that are as close to the bone of traditional country music as you’re likely to find east or west of the Mason-Dixon Line. It is among the best Americana albums of the decade, an overlooked gem.

In 2013, she released the critically successful Before the World Was Made with singer-songwriter Noel McKay. This album was compared by the Chicago Tribune with the duets of John Prine and Iris Dement and George Jones and Melba Montgomery.

Leigh’s new album demonstrates an unbroken line of the influence of Lefty Frizzell on this young, innovative artist. Here’s how she came to his music:

“Before this, I wasn’t that familiar with the bigger part of his work. I got a copy of his box set and I also stumbled onto a compilation on vinyl from the ’60s. I’ve imitated him vocally in a superficial way for years. There is just something in his delivery. He was able to express what was going on in his brain. He must have worked at it for years. It’s not only his voice, but in his approach. He changed the way I sing.”

I’ve dropped in a couple of audio samples here from the album, and below is from a concert she did with Noel. You can find this album to stream or buy from all the major digital platforms, but I’d bet Brennen would appreciate it if you head over to her Bandcamp page and do it there.

Every Picture Tells A Story

The image at the top of this page was shot by my long-time-we’ve-only-met-online friend Sandy Dyas, who is a visual artist based in Iowa City that I’ve written about often. You can visit her website hereand check out her work, books (buy them…really) and blog. And more of her images can be found on this site….including this one originally published back in January 2014 at No Depression dot com.

Martin Chilton, who is the Culture Editor for The Telegraph website, put together a list of his favorite tracks accompanied with really striking images from the collection of Joe Adams, Charles’ long time friend and manager. Taken from the book/DVD collection Ray Charles Yes Indeed! that came out in 2009, it features a forward by Bill Wyman and thoughts from Ray’s closest friends – including Stevie Wonder, Quincy Jones and Willie Nelson.

A Few Words About Merle Haggard

As I was getting ready to hit the button and publish this week’s update, I heard the news that Merle had passed on. I recall seeing him at The Spectrum in Philadelphia around 1972, and we long-hairs got hassled first by the police and then jostled a little in the crowd when he broke into ‘Okie from Muskogee’. The Grateful Dead had released a version of ‘Mama Tried’ and that was my on-ramp to his music. Had a chance to meet him in Las Vegas about fifteen years ago give or take, but he was in a foul mood that night. He was struggling with his voice, and I think he just wanted to be anywhere but in the desert.

About a month or two ago, he was interviewed by Rolling Stone Country about politics and Donald Trump. Thought it might be of interest to share his thoughts:

He’s not a politician. I don’t think he understands the way things work in Washington, that’s what worries me about him. I don’t think he realizes he can’t just tell somebody to do something and have it done, you know. I think he’s dealing from a strange deck.

What a great line. I think he’s dealing from a strange deck.

I wanted to include an appropriate song or video of his, and came across this track from an album he did with his band The Strangers, Bonnie Owens and The Carter Family. The Land of Many Churches was released in 1971 as a double lalbum and collects four live performances: two are in churches proper, one at San Quentin’s Garden Chapel inside the prison, and one at Nashville’s Union Rescue Mission. The music offers a mix of country gospel and traditional hymns with preachers introducing some of the songs.

This is a favorite of mine and it sure fits this day.

Dori Freeman Melts My Heart With A Hank Williams’ Song

Last month when the Teddy Thompson-produced debut album from Dori Freeman was released, it was one of those titles that seemed to get picked up and reviewed by every media outlet who covers this type of music. Here’s just a few examples of:

The purity of Dori Freeman’s voice and the directness of her songwriting reflect not only her Appalachian hometown — Galax, Va. — but also a determined classicism, a rejection of the ways modern country punches itself up for radio and arenas. (Jon Pareles, New York Times)

It’s startling to hear such a fully formed singing and songwriting voice come out of nowhere. (NPR‘s ‘Songs We Love’)

A strong contender for Americana debut of the year. (Rolling Stone Country)

This week John over at Free Dirt Records invited me to see Dori at the City Winery NYC, where she opened up for her producer and Kelly Jones…whose new duets’ album I featured in RPM1. As Dori stood on that stage all alone with her guitar, I must admit I wasn’t expecting to hear a voice with such incredible strength and clarity that would soar above the din of the diners and drinkers. The crowd surely responded to her, and it seemed to me that this is a woman exceeds the accolades she’s been receiving and just exudes poise and potential.

Kelly McCartney did an interesting and short ‘Q and A’ with Dori for Folk Alley that ran last week, and you can click here to read it. And here she is doing Hank Williams’ “Cold Cold Heart” wayyyyy back from 2012 at the Henderson Festival in Mt. Royal, Virginia. You should hear how she does it now…it’ll melt your heart too.

Just as Teddy Thompson and Kelly Jones stepped out onto the stage for their set, I looked up from my phone to find Steve Earle standing next to me checking out the gear on stage. I’m pretty sure Jones was using a Martin D-15M but I couldn’t recognize Thompson’s guitar, but I suspect it could have been a Lowden which his dad seems to favor. I was about to ask Steve but the lights went down and later in the evening I had to run out to catch a train before the encore was over.

A few days before I was on Bleeker Street and stopped at Matt Umanov’s guitar shop to buy some strings. Several years ago I stood there with Steve and Matt as I considered buying the Martin M-21 that they had designed together. It was one of the last ones for sale, but after counting my pennies I went for the much lower priced 000-15M. I still like playing it a lot, but I sure do regret my decision.

While Steve was touring Australia in March, he did an interview on The Music Shop with Andrew Ford and you can read it here or download the podcast. Here’s a clip of him talking about Robert Johnson and the origin of the blues.

Videos You Wouldn’t Know Existed, Unless You Found Them By Mistake.

This is a cross-post from my site The Real Easy Ed, and is a slightly abridged version minus some imagery.

My every other week Broadside column is published at No Depression and you can follow me here if you’d like. 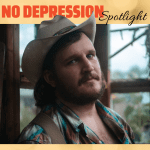