Ive been totally enchanted by this new album from one of my favorite singers, Leah Abramson. She brought an eerie, other-worldly sound to her old band The Crooked Jades, and just dropped an album, under the monikor The Abramson Singers, of sweetly sad indie folk from her home in Vancouver, British Columbia.

The Crooked Jades: Sleep in the River

One of the songs in particular on Leah’s new album intrigued me, “Trucker’s Prayer“. It’s a simple ode to truck drivers, and it sounds almost like a traditional prayer. I asked Leah for the story.

“It was written while on the Trans-Canada Highway across the prairies at the end of winter. It was basically an ice field and we kept passing trucks that were jack-knifed and flipped, it was scary and a real mess. Anyone who tours a lot knows how many trucks are on the road all the time. So I wrote a little protective ‘prayer’ for truck drivers. It’s not really religious, more like a protective spell to send out to the universe or something. It was reviewed by a Canadian trucking magazine, which was pretty cool.”

There’s a real power in her heartfelt lyrics. The power you find in protective spells in various religions, but also the power you find late at night on an empty road as your mind starts to wander and words and images come unbidden. Any industry that requires long periods of work and not a lot of talk has given rise to underground poetry traditions. The long distance between Seattle docks and Alaskan fishing grounds has pushed Northwestern fishermen to develop great talents in poetry, as evidenced every year at the Astoria Fisher Poet’s Gathering. Cowboy poetry is in the national news after coming under fire from dim-bulb conservatives looking for more ways to trash the working man. Logging poems and logging songs are near-forgotten legacies of the Northwest as well. And truckers have their poems and songs. Listen here to this surprisingly powerful poem from Richard Peek, an old trucker and banjo player.

This poem snuck up on me as I was trolling around the internet. It hit me hard and brought tears to my eyes. It’s a great reminder of how classist the arts can be. Some of our best artists are toiling away in obscurity, working long hours at other jobs and leaning hard on their art to sustain them, with little thought of fame or fortune. After listening to his poem, now read what Peek had to say about how it came to be.

“I was coming up the hill on Western Avenue with hundred thousand pounds of gasoline, winding her hard so I could get that next gear, when the thoughts that became this poem came into my mind. I savored them, and when I stopped, wanted to write them down, but it was raining, and my pen wouldn’t write on wet paper, so I climbed in the cab to jot the poem down. My boss was hiding across the street watching me, and as soon as I finished dropping the load of gas, he pulled up and fired me. I guess that makes me one of the few people to ever get fired for writing poetry on the job. Thing is, I was ready to leave truckdriving. This poem was sort of my farewell song to 25 years of truck driving, and an appropriate way to end it all..” 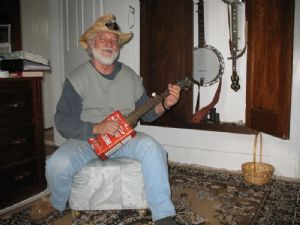 Peek’s an interesting character. I’ll definitely look him up for a longer interview, but here’s a great video of him playing a gas can banjo:

Truckers are anonymous characters in our society. We see the trucks every day on our highways, but the drivers are obscured, and their habits unknown. Here’s a real trucker’s prayer:

Dear God above bless this truck I drive,
and help me keep someone alive.
Be my mortal sight this day,
on streets where little children play.
Bless my helper fast asleep when the night is long,
and keep my cargo safe and sound
through the hours big and round.
Make my judgement sound as steel,
and be my hands upon the wheel.
Bless the traveler going past,
and teach them not to go so fast.
Give me strength for every trip,
so I may care for what they ship.
And make me mindful every mile,
that life is just a little while.
Amen
Written by Carlos Lee Akers, Sr.