The Tedeschi Trucks Band: As Timeless as the Red Rocks of Colorado

MORRISON, CO. — The scenery on my drive to Colorado diminished as I headed west: the farmland of Northern Illinois and Iowa are verdant but without the rolling sumptuousness of “God’s country” in Southwest Wisconsin, which I forsook for a quicker route. Nebraska unfolds as increasingly flat. I didn’t find it boring though, as it put me into an expansive Zen-like mode wherein I tune into the sky more with land as backdrop. And with four largely sunny days there and back, I traveled beneath myriad lovely cloud variations, from full-figured cumuli promenades to wispy flourishes by the atmospheric cloud painter. Have I looked at life from both sides now?

Still, I was stunned as many surely are, by the experience of crossing the border to Colorado. Almost immediately you encounter an extremely arid landscape dominated by slightly undulating plains and scuffling flora, mainly small bushes waiting to be liberated as tumbleweeds. A few scattered trees seemed to hang on for dear life, some slightly bowed in thirst, or as if praying for rain (Colorado’s devastating Black Forest wildfires raged while I was out there.) 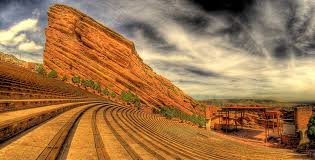 Things finally perked up as a got closer to my destination, Boulder, Colorado. The purpose of the trip was to hear the mighty Tedeschi Trucks Band at the most majestic concert venue in America, the Red Rocks Amphitheater in nearby Morrison. Rolling Stone recently voted this “The Best Amphitheater in the US,” in a vote of musicians and music industry pros. “Red Rocks is the most spiritual place on earth,” raved Dale Dawson in a discussion comment on the Rolling Stone site. “I’m proud to say I have a guitar made from the redwood of row 1, seat 1. They replaced the 50-year-old benches five years ago.” (The guitar is displayed in the visitors’ center at the top of the RR venue.)

Indeed, listeners gather inside a majestic mountainside cavern, between two massive sandstone wings, as if a prehistorically giant Icarus and his magical appendages had crashed into the earth after flying too close to the sun. Dinosaurs once roamed here. More importantly, the wings — twin leaning rock towers — provide a perfect acoustic setting, the park proclaims. For sure, it’s a musicians’ Mecca. 1

In this exalted setting, TTB proved they’re working hard to raise the high bar they’ve already set for themselves. For example, Derek Trucks seems to be perfecting a superb sense of architecture and drama in his guitar solos. His finger style-cum-bottleneck style remains indebted to Duane Allman. But Trucks is evolving unprecedented technique and conception. He’s refining the inherent bottleneck fluidity and at times it seems like his very breath informs the articulation. He consistently folded in softly nuanced notions while retaining the Southern rock-blues edge. We hear that growth in his sitar-like aspect, what he calls “swamp raga.” Here’s where micro-tonal modes meet the blues down at the crossroads. 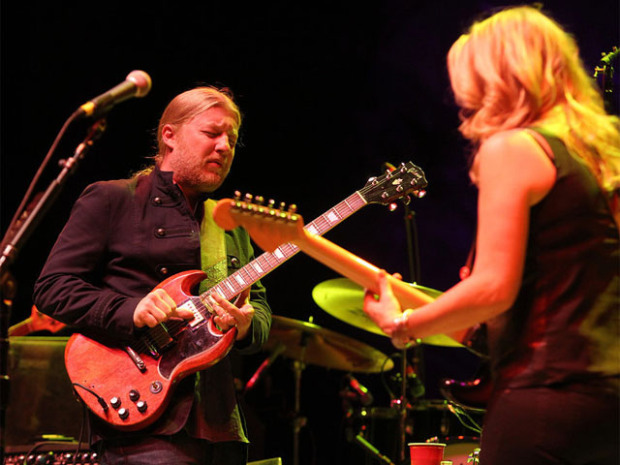 On the clear-eyed, low-flying ode to personal loss and urban suffering “Midnight in Harlem,” Trucks’ solo peaked with a stunningly long line — traveling the guitar neck’s whole length — like an aural infinity sign, which revealed the limpid outer limits of musicality in one crystalline moment. Only Jeff Beck remains Trucks’ superior among electric finger stylists, but Derek is closing fast.

Susan Tedeschi remains virtually supreme in her blues-soul-gospel idiom. On one new rollicking swinger from their forthcoming CD Made up Mind, she engaged the melody as if grappling with her soul like it was an alligator. She climaxed with a spring water-clear extended note that sounded like a river racer plunging over a waterfall, death be damned. So I chuckled to hear Tedeschi’s little-girl speaking voice after her gusty-mama belting. It sounded like she was inviting the teeming throng down for a cup of tea.

“Bound for Glory” rode its heaving waves of radiant spirit to lift any listener to a palpable light, regardless of one’s belief or lack thereof. Organist Kofi Burbridge unleashed a deep-pocket solo worthy of the late, great Charles Earland. When was the last time a gospel song was a crossover hit? “Can you feel it?”

Here’s a video of “Bound for Glory” at Red Rocks: https://www.youtube.com/watch?v=P71iiuthKfQ

All the new material also rang strong. Though I could only make out the title phrase of “It’s So Heavy,” I felt the weight of a down-in-the-bones sentiment. And the band unveiled a fresh talent, the solo singing voice of trombonist Saunders Sermons, faintly recalling the late Marvin Gaye and his tender, lovelorn falsetto. The horn players proved more self-disciplined in their solos yet as resourceful and daring as ever. The free-jazz sorties on “Nobody’s Free” asserted their ironic sense of defiance. 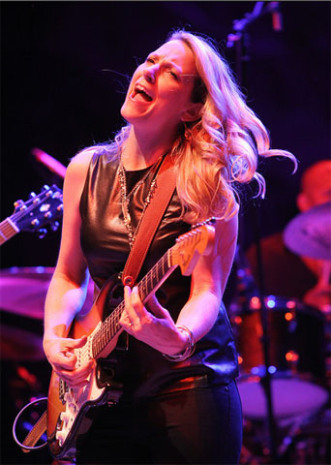 Quibbles: I would’ve gladly heard one of Tedeschi’s two best covers (both on their Live album) Fred Neil’s “Everybody’s Talkin’” and John Sebastian’s “Darlin’ Be Home Soon.” Both songs seem incongruous, given their style, but demonstrate their knack for fleshing out lyrical material without overloading it. You can’t have everything, especially when a band is presenting new material. Among the new songs, “Part of Me” has a shimmy-shake groove so infectious as to transport the listener to Motown 1968.

The crowd danced jubilantly to the latter part of the set, and when they called the band back for an encore Tedeschi proved her generosity by bringing out Grace Potter to join her in a simpatico cover of John Prine’s quietly magnificent “Angel from Montgomery.” It was actually Potter’s moment of musical redemption.

I missed the actual opening act, swamp-rock bluesman JJ Grey & Mofro, honoring the time considerations of my gracious hosts and concert mates, Jim and Kris Verdin. As for Potter and the Nocturnals, I’ve seen her in a convincing blues-drenched mode on You Tube. Perhaps because of this expansive destination-venue, she felt compelled to amp up the sound and theatrics. So we got plenty of posturing, glitzy costume flourishes and big-hair shakes from Potter, who seemed lost in a vast private fantasy more akin to Harry Potter, but without J. K. Rowling to translate her phantasmagoria.

There was little Grace in her performance. Rather than sticking to the Hammond B-3 organ, which she plays with reasonable competence, she spent more time out front dancing and doing pretend guitar. She slung on a flying wedge and played what amounted to air guitar with a real one. Perhaps in a nod to Derek Trucks, she pulled out a bottleneck, but the effect was a swift slide into screech, which lacerated our eardrums, even in the 60th row.

But it’s TTB that amazed, because they’re still just getting started. Trucks is the youngest guitarist on the Rolling Stone Top 100 Guitarists of All Time (ranked 16th). Their stylistic range is staggering because nothing sounds contrived and they demonstrate how related the various American roots musics are. At an execution level, it’s all about chemistry, as bassist Otiel Burbridge says on the TTB website. 2 and what Tedeschi calls a commitment to an inclusive family-like environment in the band’s collective lifestyle.

This must have plenty to do with the band’s discrete yet integral inner units: husband-wife leaders with backup singer-songwriter Mike Mattison as a third lead mentality; the Burbridge brothers on keyboards, flute and bass; two drummers playing as a one eight-limbed rhythm sorcerer and the three loosey-goosey horn virtuosos. Forsooth, it’s become Shakespearean — “We few, we happy few, we band of brothers” — a phrase methinks sister Susan doth not protest. After snagging a Grammy for their debut album Revelator, this band was recently nominated for Australia’s Helpmann Award for Best International Contemporary Concert.

They’re worth a long drive anywhere.

1 The area of Red Rocks, originally known as the Garden of Angels, has attracted the attention of musical performers since before the turn of the century. The majestic setting of the Amphitheatre, along with the panoramic view of Denver, makes for a breathtaking scene. In the early 1900’s, John Brisben Walker had a vision of artists performing on a stage nestled into the perfectly acoustic surroundings of Red Rocks. Walker produced a number of concerts between 1906 and 1910 on a temporary platform; and from his dream, the history of Red Rocks as an entertainment venue began. In 1927, George Cranmer, Manager of Denver Parks, convinced the City of Denver to purchase the area of Red Rocks from Walker for the price of $54,133. Cranmer convinced the Mayor of Denver, Ben Stapleton, to build on the foundation laid by Walker. By enlisting the help of the federally sponsored Civilian Conservation Corps (CCC), and the Work Projects Administration (WPA), labor and materials were provided for the venture. Denver architect Burnham Hoyt designed the Amphitheatre with an emphasis on preserving the natural beauty of the area. The plans were completed in 1936, and the Amphitheatre was dedicated on June 15, 1941, though the actual construction spanned over 12 years. In 1947, the first annual Easter Sunrise Service took place. Since then, Red Rocks Amphitheatre has attracted the best performers to its stage. From: http://www.redrocksonline.com/ABOUTUS/HistoryGeology.aspx

This blog was originally published at Culture Currents (Vernaculars Speak)