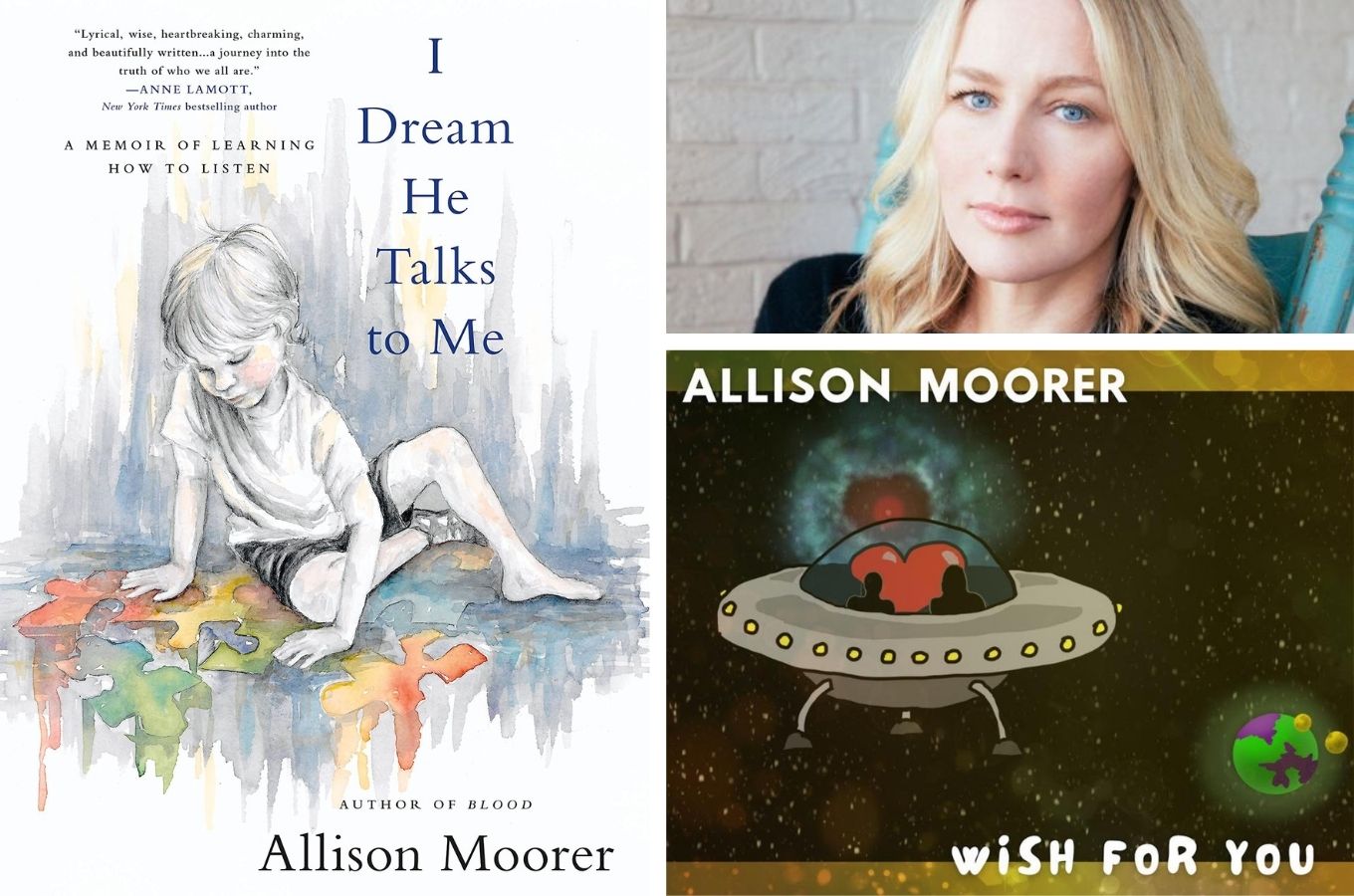 Allison Moorer opens I Dream He Talks to Me: A Memoir of Learning How to Listen (Hachette), her exquisitely graceful memoir of raising her son, John Henry, on the autism spectrum, with a letter to her son. Baring her soul, she tells him that she’s not sure how he might feel about her telling people about them and their lives, so “she wrote every word … imagining you were reading each one over my shoulder.” While she sometimes vacillates when writing the book “felt like the last thing I wanted to do,” she reminds herself that she “makes art from life” and doesn’t always “get to control the content.”

Having already written about the brutal and unsettling death of her parents in her acclaimed memoir Blood (ND interview here), Moorer is no stranger to sharing the ragged moments of despair in her life and balancing them with the exhilarating moments of joy. As she said in a recent conversation, “When you share your story, you release a lot of responsibility of holding it for yourself. We find out more about ourselves; we can see ourselves more clearly. If you’re dealing in memoir, you’ve got to be honest.”

In I Dream He Talks to Me, Moorer shares the moment that it occurs to her that her young son might have autism. When John Henry is 16 months old, he stops using words to express his emotions and often responds physically to express the ways he’s feeling. One day when Moorer is singing, she hits a note and holds it; her son reacts to this moment by pushing his “tiny hands” into her chest, turning his face away from hers, and crying. In that moment, she writes, “music has provided myriad revelations for me throughout my life, but this one I didn’t welcome.”

Initially, Moore writes, “I tried everything I could think of to bring him back. Several times each day, I practiced with him the words he had learned, even more than I had before.” She admits that “there’s no worse helplessness than the kind a parent feels when they can’t fix things for their child.” Yet, as Moorer tries to find a balance between letting go and holding on, she reaches a moment in which she accepts the state of her and John Henry’s life with a calm and affirmative energy. “Autism can in many ways be a challenge, it isn’t something that necessarily needs fixing,” she tells me in our conversation. “It’s okay, he’s okay, we’re all going to be okay. I want my son to be the most fully realized human being he can be, on his own terms.”

Moorer’s gratitude for her son, who is now 11, shines through in the book’s opening letter: “More than any other person or event, you have taught me, and you have changed me by being you. You have been doing that since the day you were born. You will continue to do that until the day you die … My gratitude to you feels endless, but I want to thank you most of all for showing me that the best way to love a person is to let them be exactly who they are. And just so you know, who you are is perfect. I hope you don’t mind if that’s something I shout from the rooftops.”

Moorer’s new companion EP, Wish for You, joyously channels melodies that John Henry had been making up and humming over and over. “He had this one little motif” — Moorer sings the tune for me during our conversation — “that he kept repeating and that I kept hearing.” She learned these melodies so she could sing them with him. “He would sing a line, and then I would sing a line.” Sharing these melodies became her way of communicating with John Henry. After he went to bed, Moorer sat down on her living room floor with her notebooks and guitar and tried to figure out how to record her songs on GarageBand. “I was just channeling these songs,” exclaims Moorer.

She built the songs on Wish for You around the melodies, she says. The title track, for example, is atmospheric, joyous, and happy. “I wrote some chords around the melody; the lyrics are minimal, expressing feelings rather than thoughts, purposefully trying to keep the words minimal. With John Henry the fewer words the better,” Moorer explains.

The first track on the album, “All We Have is Now,” opens with the rhythmic sounds of a playground glider, and the sound rolls on a loop through the tune, reminding Moorer of her son’s energy and his way of living in the moment. The chorus soars joyously, affirming exuberantly the pleasures and rewards of living in the moment. Moorer wrote “Stardust & Freedom” one night at her dining room table; acoustic guitar strums circle around handclaps and Moorer’s looping harmonies lift in a gorgeous folk song that flows into the ethereal “One Voice,” which soars on the wings of Kenny Greenberg’s electric guitar into the sonic stratosphere. The five-song EP closes with the shimmering gospel-inflected “Thank You,” a heavenly anthem flowing on Moorer’s vocals, her piano chords, and Greenberg’s guitar.

Moorer confirms that when John Henry hears these songs “he lights up.” She says that she’s not concerned whether the music gets any attention; that’s not the reason she made it. “I get enough affirmation from John Henry.”

She refers to this album as soul communication and spirit music. “There are ways of communicating that have nothing to do with words,” she says. “Music is a universal language. It is of the spirit. I just tried to be free and write what came to me. My enjoyment of this process was very high.”

As she exclaims, “This is the most important music I’ve even done because it’s not my music.”

Wish for You provides a soundtrack for I Dream He Talks to Me, and the songs on the EP convey a palpable intimacy between mother and son. We feel the love between them and glimpse those moments when we know, as Moorer says, “it’s okay, he’s okay, we’re all going to be okay.”