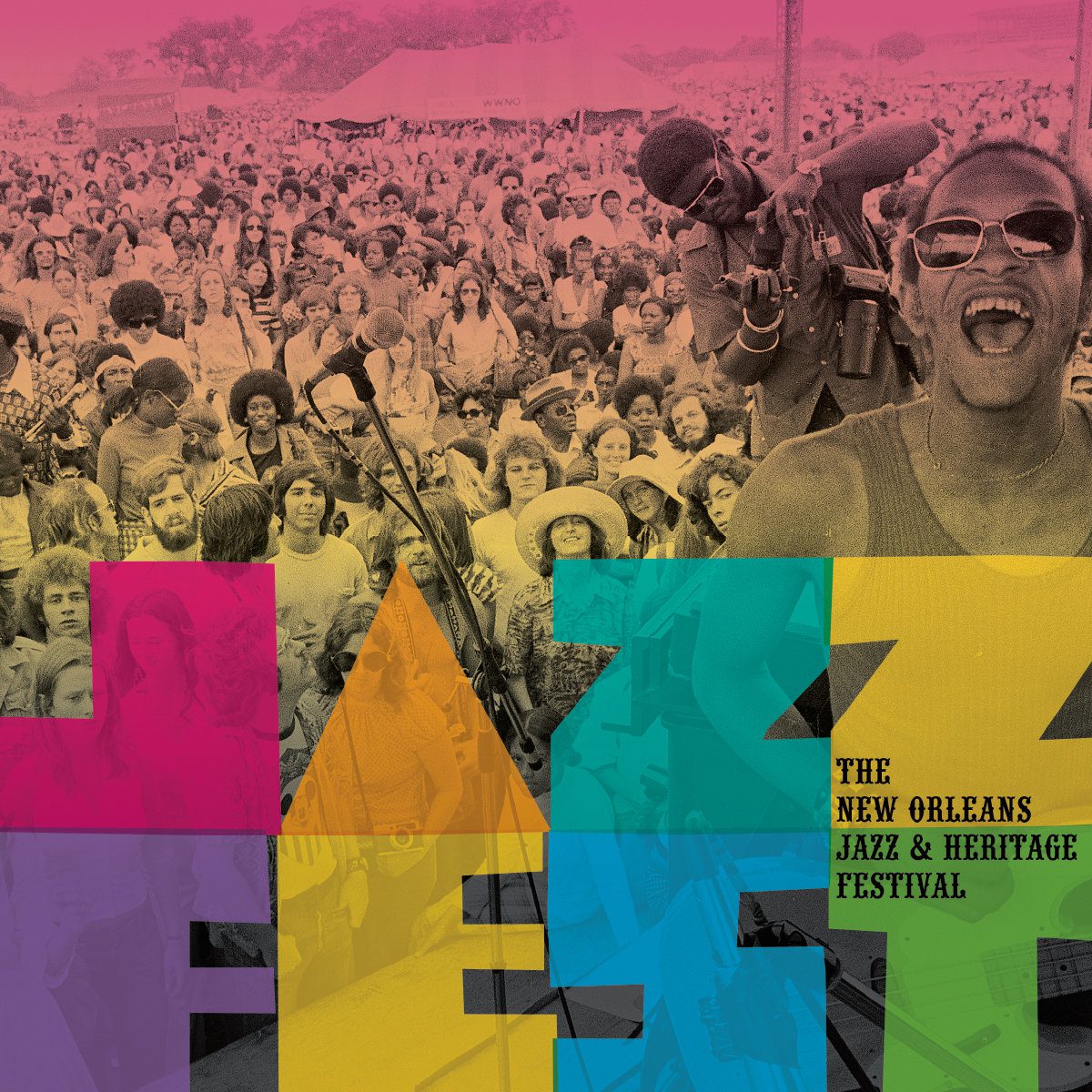 In 1962, the legendary George Wein, who had produced the Newport Jazz Festival, was invited to New Orleans to create a similar jazz festival. As he writes in the foreword to the stunning new book and 5-CD box set Jazz Fest: The New Orleans Jazz & Heritage Festival (Smithsonian Folkways), “I entered what was to me a strange world that has been part of my life ever since.”

When Wein arrived in New Orleans, the city was deeply segregated (and it remains so to this day), yet it was home to a gumbo of musical flavors — jazz, blues, folk, funk, country, Cajun, gospel — into which Wein and others could dip to showcase and celebrate the musical heritage of the city. He admits that the early days of negotiations were rife with political and cultural conflicts, including resistance from the jazz world (“the jazz world was controlled by those who worshipped Jelly Roll Morton and King Oliver who never gave up looking for the holy grail of the Buddy Bolden disc”). On April 10, 1970, Pete Fountain and bandleader Clyde Kerr Jr. kicked off the inaugural New Orleans Jazz & Heritage Festival. As Keith Spera points out in his section in Jazz Fest on the history of the festival, the gathering has endured many challenges to arrive at this 50-year mark: “Jazz Fest has survived fire and flood, wind and rain, politics and personality clashes, mud pools and ‘Macarena.’ It remains relevant even though it predates cell phones, laptops, CDs, and Spotify. It is older than hip-hop and has outlived many of its legendary performers, even as it has embraced — sometimes slowly — contemporary music. It changes when it needs to, but also remains the same. Ultimately, the story of the New Orleans Jazz & Heritage Festival is the story of New Orleans.”

The sprawling Jazz Fest: The New Orleans Jazz & Heritage Festival brings to life the history of Jazz Fest by capturing the sights, smells, and sounds of the festival that extends over two weekends in late April and early May. The lavishly illustrated book, filled with 179 full-color photographs of food, musicians, festivalgoers, and posters, perfectly introduces readers to the history of the festival and its impact on New Orleans, as well as its reflection of the character and the music of the city. Rachel Lyons, one of the producers of the set, provides a stunning photo essay on the “heritage, craft, and culture” of the festival and the “food fête” that occurs during the festival days, and she also offers a lively photo essay that takes us “off the stage, around the grounds.” Karen Celestan offers a portrait of Quint Davis, the man who became the festival’s producer and shaped it into what it is today. Wein tapped Davis to handle the logistics of the first few festivals, and while Wein had his ideas about the shape of the early festivals, Davis proceeded eventually to put his own mark on it.

“The festival is a living being,” Davis said, “it’s a living thing. Live music is an art form. There’s nothing better than to be able to experience an artist simultaneous with him creating the art itself. You’re interacting with him. Your energy goes to them, their energy goes to you. The festival belongs to two groups — the people who come, and the musicians.”

The longest section of the book focuses, of course, on the music and musicians of the festival. Robert H. Cataliotti points out the rich diversity of the music that floats, bumps, and grinds its way through the festival air, and he also points out the deep connections among families, generations, and musical styles that give Jazz Fest its unique character: “Traditional and modern jazz, blues, gospel, R&B, and funk; brass bands, social aid and pleasure clubs; Mardi Gras Indian tribes are musical forms that have emerged from the unique culture of New Orleans and are showcased by performers at the New Orleans Jazz & Heritage Festival. They are joined by Cajun and zydeco musicians from southwest Louisiana and Native American artists from the region …Various factors contribute to the interconnectedness of the music of the festival: the influence of the historical African presence in the city; a profound dedication to the city’s cultural and artistic traditions; the inimitable spiritual power imbued in the creative expressions; the key role that families play in extending those traditions; and the sense of community and versatility that are characteristic of the local music scene.”

The producers — Jeff Place, Rachel Lyons, Dave Ankers, Michael Murphy, Cillista Eberle — include thumbnail sketches of the musicians featured on the five CDs that include a brief biography, the location where the song was recorded (many of these songs come from the WWOZ radio archives and are live recordings from the festival), the players on the song, and, sometimes, how long the musicians have been playing at the festival. For example, the entry on Kenny Neal, whose “Starlight Diamond/Jimmy Reed medley: You Don’t Have to Go/Baby, What You Want Me to Do/Going to New York/Honest I Do” appears on Disc 4, comes from the Baton Rouge area and follows in his father’s, Raful Neal’s, footsteps. He played these songs in the Blues Tent on May 4, 2013, and the recording comes from WWOZ radio.