The New Madrids: Through the Heart of Town

Once upon a time, there was an Americana band from Perth (Scotland) called Southpaw. As far as I’m aware they only had one album, but it was a real goodie:  Buffalo Mansions is still a favourite in this house eight years later, packed full of great tunes and country rock melancholy. Gavin JD Munro wrote all the songs on that album and he has formed a new band with a new release of their own (see the next post on this page). The rest of Southpaw (Donny McElligott, Owen Nicholson, Callum Keith and Maurice McPherson) recruited a new guitarist/vocalist in the shape of Ian Hutchison and they have just re-emerged as The New Madrids; their new album is just great, every bit as good as Buffalo Mansions was.

Songwriting duties for Through the Heart of Town are shared between new man Hutchison and Donny McElligott (guitars, mandolin, vocals and percussion). He may not have written any songs on that Southpaw album but there’s more than one of Donnie’s songs here that sound like outtakes from said album. In particular, the opening track, Wrapped Up, seems to pick up exactly where Southpaw left off. The country rock beat from Maurice McPherson drives the thing along, the pedal steel sings beautifully, the guitars weave in and out of each other, and the happy/sad dichotomy of the love lyric introduces that yearning note that I love so much. Bliss from the opening notes as far as I’m concerned. And then: track two takes us in the new direction. You is written (and sung, I think) by Ian Hutchison and this is altogether spikier material – harder rocking with some great funky bass playing from Callum Keith and electric guitars that duel with each other. The country band tunefulness is still there but this is rock music that struts like they’re all still in their twenties, and it sounds great. In so many ways – the lyrics, the vocal, the bass, those guitars – it hints at a deep love for mid-70s British rock. All those bands that sprung from Deep Purple and from Free seem to have added something to the mix – with a dose of The Faces for good measure. Intentionally or not, they’ve borrowed some great vibes and made it sound as fresh and invigorated as could be.

Later on, the two sides of this band are meshed ever more beautifully. Owen Nicholson is a really good pedal steel player and to hear him embellishing Ian Hutchison’s contributions is to hear country music being married to blues-based rock and to wonder whether anyone has ever made that marriage work so well. Ok, that’s a stretch, I can think of some great examples, but The New Madrids do pull off something a bit special here. It’s also great to hear Donny McElligott give rein to his inner rocker. One of his songs, Big Fun, is kind of like Summer of ’69 with more dirt on its knees – and at least as capable of inducing a mass singalong.

Even more interesting is the McElligott composition, Long is the Way. This song sounds like it sprung from a particularly inspired jam session because everything about the music seems so unlikely. A slow, spiralling tune seems to pulse insistently whilst fiddle and mandolin come and go with a controlled intensity matched by the impassioned rock vocal. There’s barely any sweetness here, rather a well-imagined emotional heat that seems on the verge of tipping into madness – and it’s compelling stuff.

Oh, and then there’s the beautiful (and sad!) Alaska, building up quietly from vocal and acoustic guitar. Guest singer Brennen Leigh contributes the second vocal on something that’s first cousin to the country duets of old, but distinctly Made in Scotland.  Really, there’s so much going on here that you feel quite excited to hear a new direction being forged by some old hands; to hear them heading in that new direction with such self-assurance and fearlessness offers hope that these guys have more to bring us than just one album. Whatever, here’s looking forward to seeing them on the road this summer. 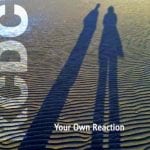 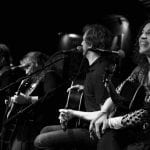