Terry Doyle ~ An Angel Above and Beyond

We are all shocked and saddened to learn that our friend Terry Doyle passed away, Wednesday, February 6th due to complications from a heart attack he’d had near the end of January. He passed away at his parents home in Middleburgh, NY. He is survived by his parents, his brothers, sisters and nephews.

Terry hosted “Crackle” on WIOX, broadcast Wednesday, Thursday and Friday from 2 to 4 pm, and Saturday from 5 to 7 pm. Terry also produced and hosted “Imprint” airing Saturday at 4 pm WIOX 91.3FM in Roxbury, NY and WGXC 90.7 FM airing in Greene/Columbia counties and WUOW 88.5 public radio from Suny Oneonta. Terry was a true supporter of really just everyone! He was endearing, had a winning smile and a big heart. Most of all Terry was a true champion of indie musicians, empowering them by spinning their music, attending their shows, and encouraging them to work hard at their craft by attending conferences, playing gigs, meeting others in the community.

Terry Doyle was recently awarded the WIOX first annual “Above and Beyond Award of the Year.” WIOX Executive Producer and Managing Consultant Joe Piasek, presented Terry with the “Doylie” award at the station’s holiday gathering, December 12, 2012. Piasek said that, “while so many of the radio station’s volunteer staff have performed above and beyond expectations in the station’s short 28 month history, Terry has gone above and beyond — running three miles in the rain from his home to the station to assist in crisis coverage, tracking down elusive newsmakers, performing marathon stand-by duty whenever needed, parading an incredible coterie of live performers to the station from virtually everywhere, introducing WIOX to Catskill Cabaradio; Terry has been the station’s biggest ambassador and more…” The “Doylie” will be awarded annually to others at WIOX who go “Above and Beyond.”

Terry Doyle spent 9 hours on air every week plus his prep time for shows, and his radio shows became a second home. His colleagues immediately went into action Wednesday night as word spread of his death. Hosts Sonny Ochs, Artie Martello, Bob Ackershoek, Jill Ribich and more began what has become a series of Tribute shows on WIOX dedicated to Terry and filling the chair for his show in the last 24 hours. The outpouring of support, love and feelings of loss are recorded on Terry’s FB pages as fans, friends and family share their memories.

Artie Martello, says “Everyone is devastated. All I can say is that he was one of the sweetest people I have had the privilege of knowing. I never heard Terry say a bad thing about anyone in the more than 2 1/2 years that I’ve known him. He turned me on to artists that I might not have ever known without his influence. Seeing and speaking with him on a daily basis and knowing that I will never see him again makes me realize how fragile we all are and how much we should cherish every moment we spend with those we love. Every so often, someone comes along that you cannot compare to anyone else. Terry was one of those people and I will miss him dearly. On Saturday, April 27 2013 (a couple of days before what would have been Terry’s birthday), WIOX will host a special event inviting musicians and friends of Terry to perform in celebration of his life.”
Artie Martello “Mostly Folk” WIOX

Tracey, and I first met Terry and got to know him well, as many of us did, at NERFA. Terry Doyle was an energizer bunny. He never stopped going, he never stopped meeting and introducing people, telling all he knew about the newest in music, mentioning the artists one should be listening too. He was very community minded, and if you were coming to the station to do his show he extended a hand by trying to help you get a gig in the area, or talking about how the music community could be more harmonious, and less politics. Music was music and Terry believed the world and communities could benefit from the harmony and not the discord that comes along with the business. He always kept a positive outlook on life and building music community.

If you attended this past NERFA and Terry approached you, I guarantee you received John Scarpulla‘s CD, a business card and John’s handbill of NERFA showcases, and if John was nearby you probably met and shook his hand. Terry had taken on the management of John’s career, but listening to Terry tell you about John, you also knew he was not only passionate about John’s work, but that they had also developed that special bond that manager’s and their musician’s build. A unique bond so close to your heart, filled with friendship, love, and working together to make dreams come true.

If you haven’t heard of John Scarpulla, take a listen. Imagine John is Terry’s guest and tells his audience “I also want to add that all my guests receive freshly baked cookies, right before the show –
the famous Terry Doyle chocolate chip cookies.”

John Scarpulla says “I met Terry Doyle completely by accident at a concert in Cobleskill NY in 2008. I was new to the area and the music scene until I shook Terry’s hand for the first time. I was instantly a part of the community.

Having just recorded a cd, I of course scheduled a radio interview with Terry. What followed was a rare and unique friendship born out of the love of music and community. Terry was everywhere at once. He would see a show in Binghamton at 8 and be at my show by 10 in the middle of a snow storm. It became commonplace to look up from the microphone on any given night and see Terry smiling, listening, thinking, feeling. He had the ability to make you appreciate your own music. He was never harsh or mean spirited when it came to music. He simply loved it.

This past November, Terry finally convinced me to attend NERFA with him. After 4 years of back and forth, me claiming ” they won’t dig what I do” and Terry insisting “you are wrong.” I went. And I must say he was right. I met many talented players and incredibly good people over the 4 days.

Terry showed me that there are truly no boundries between genres and people when it involves music. He could recall things about your shows and songs that you had long forgotten. A chronicler and champion of the struggling musician. I got to see Terry in his Mecca. He barely slept a wink. He knew the names of everyone he met and recited them to you! He loved music and despised the politics and jockeying for position that is the music business. He was without an agenda. Selfless, passionate and sincere. I cannot express the amount of gratitude and love I have for Terry. He was and will forever be a true light and an invaluable gift to music. Rest easy friend.” John Scarpulla

Jessica Vecchione says “I’m just one of hundreds who wanted to pay tribute to Terry in some way. I’m grateful I had that interview video shot in May and September and at the WIOX Christmas Party, all in 2012. I’m honored to be part of the community that holds him so dear.” Please take a moment to view this video tribute by Jessica.

His chair is empty, his voice gone from the airwaves, the bowl of “Snickerdoyle” cookies sits waiting for the next guest, the next show.
But we know as he sits in his studio in another realm beyond, Terry is smiling knowing that his friends here on earth are carrying on his mission, “to play cool music on the radio based in Americana…plus live in studio guests.” We wish Terry a fond farewell, a gentle wave and bid this gentle angel, Terry Doyle, a sweet goodnight, in the great “Above and Beyond.” 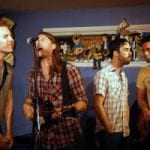 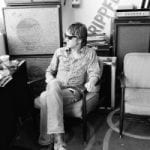