A version of this was published in The Santa Fe New Mexican
June 25, 2010

After a dozen or so years in limbo, Jason & The Scorchers are back with a rocking album called Halcyon Days.

The band might qualify for the description “institution.” Or maybe the group might just belong in an institution for carrying this flame for so long.

Singer Jason Ringenberg, guitarist Warner E. Hodges and the original Scorchers started out in the early ’80s, combining country tunes with punk/metal fury. They might not have been the first to do that, but I believe they were the best and definitely the most influential.

They broke up by the end of the ’80s, but re-formed in the mid-’90s — just in time to join in the fun of the alt-country movement, playing on bills with bands they had clearly influenced. They might have been senior statesmen of the genre, but they rocked harder than just about any other band on the scene.

But by 1998, the Scorchers were scorched out. They called it quits with a double-fun, double-disc live set, Midnight Roads and Stages Seen, released at the height of the alt-country era.

Ringenberg didn’t exactly disappear. He did some solo albums. Some were politically tinged, like 2004’s Empire Builders (which has a great version of Merle Haggard’s “Rainbow Stew”), and he did some children’s records under his alter ego “Farmer Jason.”

But now, armed with a new rhythm section, we have Jason & The Scorchers version 3.0. “I have to confess that the primary reason I committed to do this record was to shut Warner up about it,” Ringenberg writes in the liner notes.

As an old Scorchers fan, (to the left is a snapshop I took first time I saw them — Liberty Lunch, Austin, 1997) I’m glad the band made Halcyon Days. It’s hardly an essential album, but it’s got some good songs and very few duds. I bet all the songs would sound better live, but that’s the case with all of this group’s albums. 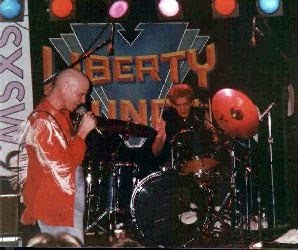 Halcyon Days starts off with a high-voltage character portrait — “Moonshine Guy,” which is about a backwoodsman who lives with a dog, a jug, and a television set he blew up “because it wouldn’t play his favorite song.” It’s done as a medley with a original tune called “Releasing Celtic Prisoners.”

Even better is “Twang Town Blues,” a slow-burning tale of sleaze and betrayal in Music City, U.S.A. Ringenberg speaks the lyrics of the verses. The ghost of the Man in Black hovers over the chorus: “Last night he dreamed of Johnny, that he was still alive/Tonight he’ll kill a six pack, just to watch it die.”

Also worthy is “Beat on the Mountain,” co-written by Ringenberg and Baltimore songwriter Arty Hill. It’s the story of a third-generation coal miner who feels trapped. “Nowadays the union rep still don’t know my name/the days of scrip are over, but the dust rolls just the same.”

The major throwaway is “Better Than This,” featuring Hodges on vocals. Let’s just say that, as a singer, he’s a wonderful guitarist. But that’s not the trouble here. The song sounds like generic cock rock.

Another tune with a different singer fares better. “When Did It Get So Easy (to Lie to Me)” is sung by Scorcher pal Dan Baird of The Georgia Satellites and, more recently, The Yayhoos. The song, an acoustic blues stomp, doesn’t sound much like a Scorchers tune, but it’s pretty cool..

* A Bad Year for Love by The Cornell Hurd Band. The concept of a bad year couldn’t have been far from Cornell Hurd’s mind. In August 2008, his longtime rubboard man Danny Roy Young died of cancer. Then six months later, guitarist Paul Skelton (who also played with Wayne Hancock, among others) died, another cancer victim.

This record includes some tracks with Skelton and/or Young. They are both listed in the credits, along with the usual small army of pickers, pounders, and singers.

The album starts off with an original song called “Respect for the Dead” — if that’s a tribute to his fallen bandmates, it’s a subtle one. The “dead” in the title refers to the narrator, who has had his heart ripped out by the woman he’s singing to. “It will come back to haunt you if you dance on my grave/You’ve got to show some respect for the dead.” The title song is also about a romantic breakup: “ ’86 might have a been a good year for wine, but it sure was a bad year for love.” Actually, there are some songs dedicated to the departed, all of which are instrumentals. “Cold Rain,” the liner notes explain, was originally titled “Rubboards and Roses” and was written for Young. New rubboarder Bear Eagle plays it here.

That tune and five other instrumentals, the liner notes say, make up the Paul Skelton Suite. Among them is “White Sands (Home of the Radar Men)”, a breezy little swing tune that sounds like it could be from a ’60s soundtrack. My favorites of the suite are “Thunderbird Highway,” a party rocker, and “My Very Last Dream,” which is sad and wistful.

As usual, Hurd includes some fine honky-tonk covers. He and the band do a nice job on the Roger Miller classic “Invitation to the Blues,” which includes a Skelton solo. And there’s “I Got Wine on My Mind,” an obscure Johnny Paycheck lament about being a hopeless sot. Hurd goes back to an obscure ’50s rocker (by a group called The Bell Notes) for “I’ve Had It.”

But Hurd’s own songs are the backbone of the album. His “I’m Gonna Drive” has a classic country feel with just a hint of rockabilly.

Let’s hope he keeps on driving and that this year will be a better one for good old Cornell.