A version of this was published in The Santa Fe New Mexican
April 22, 2011

Slim Cessna’s Auto Club is often billed as a “country gothic” band (whatever that is). Led by Cessna, who shares vocal duties with sidekick Jay Munly, the Auto Club often takes the viewpoint of sinners in the hands of an angry God. But on its new album, Unentitled, which some critics say is the group’s most accessible, many songs are so upbeat and happy-sounding that I really don’t think the “gothic” label does the band justice.

True, Auto Club has that banjo-apocalypse vibe of fellow Coloradans 16 Horsepower going full force on the first song, “Three Bloodhounds Two Shepherds One Fila Brasileiro.” This is a terrifying tale that deals with bloodhounds being set loose on some hapless target, perhaps an escaped prisoner. It takes me back to House of Freaks’ “When the Hammer Came Down.” The narrator of that tune, running from bloodhounds — though we’re never told exactly why — could almost be the victim in Cessna’s song.

However, the next tune, “The Unballed Ballad of the New Folk Singer,” takes off with an eye-opening, frantic, almost ’90s ska-like beat. The music is fierce and thundering and, no, not very “country” (though I can imagine a band like the Legendary Shack Shakers doing something like this).

The following song, “Thy Will Be Done,” gets back to the banjo with an almost raga-like melody and some otherworldly whistle instrument I have yet to identify. I’m not quite sure why, but when I hear this song I want to mix in some Tuvan throat singers. Somehow they’d just fit in.

That old-time religion — backwoods hellfire style — is a major theme with the Auto Club. The first three minutes or so of “A Smashing Indictment of Character” has an upbeat- sanctified rhythm, the kind Paul Simon employed on songs like “Gone at Last.”

But some subsequent tunes get darker and spookier. The seven-minute “Hallelujah Anyway” is a twisted tale of an arranged wedding. But even better is the closing song, “United Brethren,” an emotional tune about a preacher losing his congregation to another church — just as his great-grandfather had experienced. It’s not a problem most of us will ever face, but as Munly pleads at the end of the song, “Lord have mercy upon us” in his lonesome tenor with just an autoharp behind him, only the most hard-hearted heathen would be unmoved.

“My people always been United Brethren. Cessnas always does as told,” Slim sings at the outset of the tune. This free-spirited record proves that’s probably not true.

So ya wanna talk about country rock … also recommended: 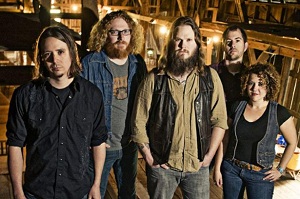 *Whitey Morgan & the 78’s. Hands down, this record, released late last year, is the most “pure” country album Bloodshot Records has put out since … well, since the latest Wayne Hancock album a couple of years ago.

Morgan, whose real name is Eric Allen, is a Flint, Michigan, native, but he’s got a voice that’s bound to remind you of a young Waylon Jennings, or — I almost hesitate to say it — Hank Williams Jr., back in the days when Bocephus was good, before he became such a caricature of himself.

I was hooked from the first track, “Bad News,” a John D. Loudermilk tune covered some 40 years ago by Johnny Cash and, believe it or not, former Los Angeles Ram Roosevelt Grier, who sang it on some TV variety show (I forget which one) in the late ’60s.

Whitey salutes his musical heroes like George Jones in “Turn Up the Bottle” (the rest of the refrain being, “and turn up the Jones”). And he does a rowdy cover of “Where Do Ya Want It?” — Dale Watson’s tale of Billy Joe Shaver’s Waco shooting incident.

While Morgan is good at doing other people’s songs (there are Johnny Paycheck and Hank Cochran songs here, too), he is a decent songwriter himself. “Buick City,” a fast-paced tune about his hometown’s economic woes, is a highlight. It’s a nice little illustration of how times have changed. In the early ’60s, Mel Tillis wrote and Bobby Bare sang “Detroit City,” about a lonesome Southerner who moves to Michigan for economic reasons. In “Buick City” Morgan yearns to go to greener pastures in the South — Austin, Texas, to be exact.

* Sundowner by Eddie Spaghetti. Unlike Morgan, nobody would be likely to mistake Mrs. Spaghetti’s baby boy for Waylon or Bocephus or David Allan Coe.

But Eddie, who’s best known as the lead singer of Supersuckers, has always had an special place in his heart for country music. You could sense a country/rockabilly vibe in some of Supersuckers’ records even before the group made a stab at country rock in Must’ve Been High in the late ’90s. And Eddie’s solo records, including this one, have been full of fun country tunes. 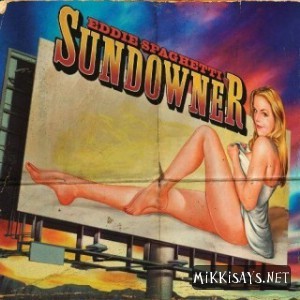 Here he sings Johnny Cash’s “What Do I Care?” Steve Earle’s “If You Fall in Love,” and a better-than-it-should-be take on “Always on My Mind.” (Willie Nelson had a hit with it, and Elvis sang it before Willie.)

My favorites on Sundowner are “Party Dolls and Wine” (a country-rock take on a Dean Martin tune) and Del Reeves’ twang-heavy truck-driver hit “Girl on the Billboard.”

The Whitey Morgan and the Eddie Spaghetti albums are from Bloodshot Records.