The first song Martin McCormack and I set out to write together was a thing called “Banshee Gumbo.” This song was written over 20 years ago in the first apartment that my wife Maggie and I occupied early in our marriage.

The apartment was located in a building that my father and my brothers had bought next door to their club FitzGerald’s in Berwyn, IL. At the time we lived there, my German friend Otto had a small appliance repair shop at the rear of the first level of the building. The front of the lower level was occupied by my Korean friends who had a dry cleaning business complete with seamstress.

In a concerted effort one night, Marty and I set out to write “Banshee Gumbo.” The song describes an Irish band attempting to perform Irish music after having ingested Cajun food. A gastronomical mayday ensued, “from ‘Saddle the Pony’ to ‘Galway Bay,’ it all came out bon temps roulez.

On August 13, 2011, Marty and I along with my siblings and their spouses attended a surprise birthday party for my eldest sister, Mary. Mary has been a long-time supporter of Switchback, having hosted us in her home when she lived in Florida and also traveling with us to Ireland twice. In fact, she is planning to join us on our trip to Italy next year. With seven of the nine children born to Margaret and Chris FitzGerald in attendance, it was a good sized group at Quartino, a downtown Chicago Italian restaurant, that awaited Mary’s arrival. When Mary arrived she was accosted by the sight of her oversized, Irish Catholic family. Mary’s husband Matt and daughter Madeline led her like a lamb to slaughter. 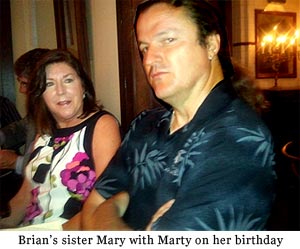 The restaurant was noisy and crowded. We wondered how we could converse over such a din. After a few drinks, the noise level at our table insulated us from the noise from surrounding tables. Thanks to Marty, I didn’t mix the grape and the grain. He also gave me a quick elbow when it was time to stand and give a toast to Mary. For dessert, a large platter of cupcakes was passed around. These were of the decadent variety. They were all so uniquely tempting, which one to eat? Well if you’re me, you can only eat one. Marty somehow finished off two. 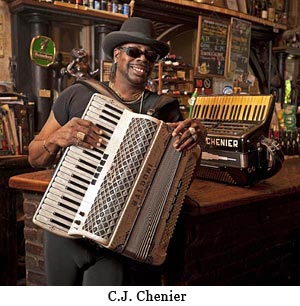 After dinner we all headed over to FitzGerald’s in Berwyn to catch C.J. Chenier and his Red Hot Louisiana Band. C.J., an old friend of the family, once explained to me how musicians in Louisiana go about “sitting in.” C.J. said, “Back home when you want to sit in you just go on stage and tap the guitar player on the shoulder.” That is exactly what Marty and I did that night. We performed “Banshee Gumbo” and dedicated it to my sister Mary on her birthday on a stage a stone’s throw from the apartment in which the song was penned.
~Brian FitzGerald

Click here to view the live performance of Banshee Gumbo

On a rainy night not long ago
We were doing some cookin’ before the show
Of sick boiled potatoes and cabbage greens
Had a taste for somethin’ from New Orleans
Like a bolt of lightning and a thunder clap
Les haricots we began to snap
The Queen whipped up a mighty roux [1]
While humming a bar from the “Foggy, Foggy Dew”

[1] The Queen was a nickname for Mary McDonough, the fiddle player for the Wailin’ Banshees.
[2] Cochon is French for pig.
[3] Poteen is Irish for moonshine.
[4] Bon temps roulez means “let the good times roll.”
[5] “And my dear it’s a Banshee Gumbo.”