Miracles of Modern Science is a guitarless quintet, and the band produces tunes under the guise of “eccentric chamber pop.”  First formed on the campus of Princeton University in 2004, the group seems to have carried over its academic sway into its post-college career; indeed, it is decidedly collegiate. From its overly self-aware inter-song banter, chock full of wry and wordy humor, to its members’ seeming pension for donning button-up shirts and sweaters onstage, Miracles of Modern Science is an overwhelmingly Smart(!) band. Its chosen form of expression — pop-esque tunes sung and played on a doublebass, mandolin, violin, cello and drums — is ideal for its unique collective aural aesthetic. Ragingly unbridled electric guitar solos would not suit it at all.

Friday night, Feb. 20, 2015, at Mercury Lounge, MOMS (an acronym used and encouraged by the band itself!) performed songs from their soon-to-be-released album as well as its past two releases, 2013’s Meems and 2011’s Dog Year.  The instrumental work was impressive all around. Each song’s melody interwove perfectly with each other line, as it might in a good classical chamber group. Josh Hirshfeld’s mandolin playing was particularly beautiful. Evan Younger, doublebassist and lead vocalist, served as a sufficient front man for the group. But, undoubtedly, the most exciting vocal moments were the brief inclusions of four-part borderline clashing harmonies, sung perfectly in tune. Immediately following these the-whole-is-greater-than-the-sum-of-its-parts moments, the returns to Younger’s solo singing was vaguely exciting and emotion-checking for the audience. After all, MOMS seems to favor the cerebral over the heart-wrenching, in terms of its sound, issuing a tight restraint throughout. It was this restraint, however, that rendered the group’s output successful. With all its braininess, its musical compositions always stood in beauty and with a firm grasp on the mechanics of a good song.  To write these pieces, MOMS must have a comprehensive knowledge of the history of classical music, more specifically the inner workings of chamber music, as well as the elements of a great three-minute pop song. The emotional factor was always present during numbers, albeit subtlely so, running underneath as an undeniable and enigmatic current.  Highlights were renditions of “Singularity” and the ever-exciting “Dear Pressure.”

The fact that Miracles of Modern Science seems to be almost too intellectual for its own chosen vocation allows the group to not take itself too seriously onstage. At times during their Mercury Lounge set on Friday night, the band took itself so lightly that it came across as insecure. But this was an error in conveyance, to be sure, because such talent and joy must have come from a profound and greatly warranted confidence in its musical direction. This seeming lightness was more the band’s intensely accurate perspective of itself and of any artist for that matter, and of its prime objective: to ensure the achievement of a great time had by all, on stage and off. It is safe to say that this objective was accomplished at Friday night’s show. 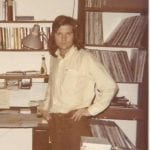 When Lucian Truscott Comes to Your Bob Dylan Class