It’s immediately apparent that Cary Ann Hearst and Michael Trent were meant for, if not made for one another, and by that we mean the following things: They must be each other’s favorite drinking buddy. They couldn’t be more different from one another – with Hearst the boisterous hostess with the mostess-Dolly Parton personality and Trent, the quieter woodsman who is more the type of Ryan Gosling in the film “Lars and the Real Girl.” They strike us as the kind of couple who sit around their John’s Island, South Carolina, home giving each other shit in the most loving way possible, reading Howard Zinn books, stitching beans and rice onto an old J. Crew coat and generally living a leisure life, where some of the greatest parts of it are chewing the fat with their country neighbors and rubbing good old Townes Van Zandt Robinson’s doggy belly until he just can’t stand it anymore, as he lies by their feet. They seem like the kind of people who don’t bother taking their cowboy or rain boots off when they head indoors, for it’s just a little mud or dirt or water – it’s not a big deal. They seem as if they would both consider a meal that included cornbread with some fresh honey on the side to spread, some baked beans, some slow-cooked BBQ meat slathered in sauce that runs down their forearms like an orange river, to fall to the ground at the point of the crooked elbow and some still-warm, homemade apple pie, heartbreakingly beautiful. We’re guessing they’ve spit watermelon seeds at one another at some point and they’ll do it again. We suspect that they might refer to the other – when speaking with a third party – as either “the old lady” or “the old man” or “the old ball and chain” and they do it with a smile, continuing a long-held tradition of pretending that a wife or husband are the banes of existence.

It’s this thought that makes Shovels & Rope what it is – the combined powers of two phenomenal songwriters who happen to be married to each other, giving us stories of marital struggles, of loyalty and love that goes deeper than a wedding band, vows and all of that lip service and silly adornment. They write songs about trying with all their might to keep this rickety old ship/marriage together and seaworthy. They write songs that don’t undermine the difficulties of staying committed and determined to see everything through until the days when the wrinkles take over, they just barely get around and then everything just shuts down for good. It’s hard work and it’s hard living, sacrificing and surviving, loving unconditionally in the face of adversity and temptation, but you hear it in Heart and Trent’s voices that this is a beautiful battle to wage. They make references to Bonnie & Clyde on this self-titled album of theirs and they sing on “Boxcar,” “Hey, hey cut the rope/There’s no way I’m gonna let ’em get us both/So don’t stop runnin’ til you reach that coast/Let your pretty mama go up in smoke,” giving us the feeling that no matter what happens, they’re going to share a cemetery plot someday and they just might find a way to break through the coffins and hold hands underground, even after all that. Shovels & Rope songs are songs about loving through poverty, when people are all torn up and stressed to the maximum, when “it was all we could do to keep a nail in the floor.” It’s virtuous love and resilience, and it’s fashioned after the way those in Nashville used to write ballads and duets – where there was just as much pain as there was happiness. They are songs filled with mercy, mistakes, fire and the sort of genuine compassion that cannot be swept away or buried.

Head over and let me know what you think, 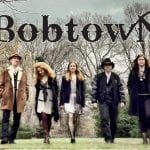 Getting to Know Bobtown