Due to large looming deadlines, this appreciation must be brief but I can’t let the passing of the wondrous Sharon Jones pass without notice. Jones, a Hillary Clinton supporter, had reportedly suffered a stroke while watching the 2016 election returns. But she had long struggled with pancreatic cancer.

Sharon Jones, 61, exemplified what a woman can do, despite all the glass ceilings she had to fight through in this still male-chauvinistic American life. To that point, witness the latest election, in which a historically white male-centric-contrived system, The Electoral College, has allowed a seemingly misogynistic and race-bating candidate to be named “president-elect,” despite the American people having voted to elect Hillary Clinton, by a still-widening popular vote margin. 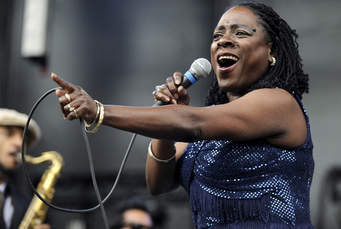 But just as Clinton was born to be a public servant, this woman was born to serve the public soul, as an anecdote from a New York Times unpublished interview indicates:

“Before she was discovered, she worked as an armoured car attendant and a prison guard at Rikers Island in New York City, often singing Whitney Houston ballads to lonely inmates.” 1

Part of Jones’ challenge was that she decided to become a professional soul singer at middle-age and without having the proper singer-diva physical package (think, Whitney Houston…) being a short, pudgy, ordinary looking African-American woman. After she formed a band, Sharon Jones and The Dap Kings,  music industry executives and marketers rebuffed her repeatedly.

So she finally went her own independent way and her persistence, fortitude and talent won out, with a fairly successful if all-too-short career. Like many others, I recall the immense feeling of first hearing her music, which rekindled the fire, passion and love of life in all its peculiar colors, in the tradition of ’50s, ’60s and ’70s rhythm-and-blues soul singing.

Her singing carried deep grit but also a phrasing instinct that almost invariably curved upwards toward an impervious radiance and joy that no disease or social affliction or oppression could suppress. That was Sharon’s gift to us, to show that a black everywoman could drink deeply from the the fountain of creative youth and glory, and share the light with us, even in seemingly dark times.

It’s a style without the over-the-top glamour-posturing and glitz that seems de rigeur for most pop singing these days.

Neo-soul music is generally enjoying a resurgence but Jones was one of the very few women driving that wave and riding its crest. And she was fast embraced by her peers as this wonderful video indicates:

The duet appearance with Susan Tedeschi in 2015 occured shortly before Sharon Jones’ group joined the Tedeschi Trucks Band’s tour this last summer. 2 Both singers draw deeply from the R&B tradition, as is evident from their delicious renderings of Sam Cooke’s “Bring it on Home to Me.” and Etta James’ “Tell Mama.”

If you have troubles or the blues these days, you can tell this soul mama, even though her body has passed on, by turning on one of her records and letting her commiserate and lift you back up. For the holidays, she also has a bracingly lovely rendition of “Silent Night” following the two Tedeschi duets on YouTube.

But don’t just youtube her. Buy her records or downloads, for the sake of her band and legacy, for an investment in what her music means to be sustained, rather than freely exploited.

2. Thanks to Harvey Taylor for alerting me to this video.