Shane Tutmarc (has worn many hats)

0
0
Shares
With a face like a young Willy DeVille and a young Tom Waits and a taste for eccentricity that combines these two musicians, Shane Tutmarc deserves to be considered one of the most exciting and promising artists of the American underground songwriting scene.
Despite the fact that his previous works have flown somehow “under the radar”, the eclectic Tutmarc is anything but a budding artist. As leader of Dolour (a band based in his native Seattle, WA) he released four records (and an anthology), another two with the Traveling Mercies (a “family band” staring his brother and cousin) and finally one as a solo artist. This makes something like a hundred songs written, self-arranged and produced in less than 10 years.
While this body of work is impressive (especially for a young musician, he was born in 1981), this is not the quality that stands out most. Above all what stands out the most are the lyrics, always bewildered, odd and rich in humor (far better than the boring, serious and pretentious profusions we usually hear) but still capable of saying something interesting about the lack of reference points of a generation who grew up between economic regressions and social conflicts.
All these oddities flow naturally into his songwriting with a sound where all the rules of alt. country (or anything usually tagged “Americana”) are grinded down in a kaleidoscope of inventive, stylistic detours, with hints of surrealism.

HEY LAZARUS!
Hey Lazarus! (the second album with the Traveling Mercies after I’m Gonna Live The Life I Sing About In My Song, 2007) represents a perfect example of the creative “Tutmarc method”, a guide of how to set fire to the clichés of American tradition trough a “surrural” (surreal + rural) lens of a Tom Waits (a main reference point of Tutmarc’s songbook), the ramshackle but powerful country-blues of Memphis and the wild electric pathos of indie institutions like Okkervil River or Bright Eyes.
From the buzz of the initial Fair Warning (a ramblin’ song for 6-string and organ that gives a “Fair Warning” to all the boys searching for themselves: “You find yourself right where you started and it’s feeling like the end/ No, no, no, no, it’s just starting to begin”), to the perfect country-soul of Honey I Choose You, from the turbulent honky-tonk of Since You’ve Gone and Through These Eyes to the rock-blues bedlam of Next Big Thing there is not a single throwaway.
Each song is a deliberate (and irresistible) attempt at the common rules of a certain genre: listen to the Cramps-like scratches of the wild-eyed gospel of both the title track and the traditional Ain’t No Grave, to the slow piano ballad Front Door’s Open,and to the intense Dylanesque closing ballad, Jayden.

SHOUTING AT A SILENT SKY
And, if possible, the following record is even better. Shouting At A Silent Sky (his first solo experiment) is opened by the bluesy guitars of Mortality Blues where Tutmarc explains that what scares him most is not death itself, but the imponderable development of life and, above all, the sad eventuality of sleeping alone.
The album proceeds between clangors that suggest a fight between Tav Falco and Nick Curran (Lost Myself Again), sweet ballads that sound like ’70s country (Eliot), memories of filthy piano-bars (Idle Hands), slow songs transformed into rock-blues explosions (Crimes Of Passion), gypsy rock’n’roll hymns (Let Me Down Easy), tributes to the noir iconographic of the fifties (Red Winter Coat would have been a favorite of Alfred Hitchcock and Bernard Hermann) and drunken Stones-style gospels chorals a la Sweet Virginia (the swinging Ocean Of Dreams).
After all these contrasts of perspective, Tutmarc places two songs that sound amazingly classic: There’s No Star To Lead Me Home and Death & Texas. No Star is an epic rock-ballad driven by a B3 organ filled with guitar licks on fire while Death & Texas is a delightful country-rock postcard from a lost world of melancholy. These perfectly placed final statements contribute to make Shouting At A Silent Sky a must-have album for anyone who hasn’t stopped believing in the power of a beautiful song written and performed by an artist who loves to destroy the rules (because he knows them inside out) and, like all of us, is still in love with it. 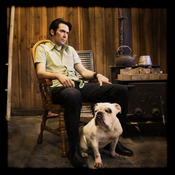