A little over a month ago the good people of California took a wooden crate and filled it up with clothes, makeup, hair extensions, books, music, an iPod, computer, assorted sundry items, a Martin guitar and a pretty girl. We nailed the lid shut, slapped on a label, took it down to the post office and shipped it freight collect to the state of Washington. In a sort of weird version of “Go to your room young lady!”, there was just a consensus down here that like it or not, Seattle needs yet one more talented female alternative indie-folk singer-songwriter with the imaginative ability to bring a room to it’s collective knees. She will thrive there. Whether singing an old time spiritual, one of her own brilliantly written songs or a Justin Bieber cover, the girl has talent. The girl has soul. The girl has wit. The girl has guts. And the girl has no shame. Justin Bieber….really?

The girl had just released her first album the week before she moved, had a couple of parties at some of the coffee shops she often played at down here so her friends, family and fans could see and hear her one more time and have the chance to buy a copy of life & love before she hit the road. Seemed sort of an unusual move…for an artist to spend a couple of years playing the circuit, building a fan base and then saying “au revoir et adieu”, but she had her reasons…reasons of life and love, of course.

This girl is not quite a quarter century old, and her name is Holly Pulliam. There are seven other brothers and sisters, and an eighth who will be joining them shortly. For about two years now I’ve been watching configurations of Holly, her friends, various siblings and even the dad perform together and solo, as if they were some modern day version of the Trapp Family. The hills are alive and all that. You go to one of Holly’s gigs and half the joint is crawling with them and their friends…taking up tables and chairs, jumping up to sing harmony, dancing, taking photos, making videos, smoking outside, showing off tattoos and having just a high old time. (To be fair, the smoke and ink thing could just be their friends but I’m not sure.)

For an outsider it can be a little overwhelming, feeling as though you’ve stumbled into somebody’s living room where everyone knows everybody else…except you. But those songs…and her voice…it just brings you into the fold and she can take you places you’ve never been. I’m an old guy who has seen and heard a lot of music far and wide, but there have been nights when Holly has taken the stage and delivered transformative performances that I rank as some of the best I’ve ever encountered. I really believe she’s that good.

Playing and singing since she was fourteen, Holly grew up being home schooled and had parents who were wise enough to allow her the freedom to choose her own educational pursuits; and she focused on music. Her list of influences are both generationally-appropriate for someone who is only twenty-four, but also show a depth and knowledge way beyond her years. I’m more than twice her age, of which it just kills me to admit, but she and I listen and love much of the same music…Iron and Wine, Bon Iver, Sujan Stevens, Patty Griffin, Neil Young, Rocky Votolato, First Aid Kit, The Civil Wars and Be Good Tanyas to name just a few. (If only she would cover that Richard and Linda Thompson song I sent her rather than warble Justin Bieber and Coldplay covers, she’d soar on the hip-o-meter…but I guess we all have our flaws.)

Here she is with the amazing, angelic Ashlee Morton doing a homemade video of the Cox Family’s “I Am Weary, Let Me Rest. Pure joy.

I could tell you that she moved to Seattle because of it’s thriving roots music scene, and because she feels she has a better chance to break out there. And that would be mostly true. And while sometimes we travel to places, other times we have a need to run from them. Last summer Holly ended an eight year relationship and wanted to move on with her life both emotionally as well as geographically. “Just trying to figure out who I am and what I want out of life…. you know…typical quarter-life crisis stuff.”

So the album….of life and love. (The Amazon link.) I have a cracked-up theory that half of all songs written are about needing to find love, half are about losing it, half are about how great it is once you find it, and the rest are about drinking whiskey alone in a bar because you don’t want to go home. It was pretty clear on my third or fourth listen that Holly’s songs have nothing to do with alcohol and she could easily win the Adele Award for Terminally Broken Hearted Girls should there be such a thing. But an eight year boy-girl thing lasts longer than most marriages these days, and she appears to effortlessly deliver a lyrical quality to her songs of the hurt, betrayal, disappointment, shame and rage that defines this thing we call love, or more accurately the closing of it. And as it comes from the female perspective, I’ve pondered if this is a “chick-flick album”. But as a man who is sensitive (admittedly, a subjective opinion), and comfortable with both my yin and my yang, who easily and freely cries at the end of a movie or book, I find myself connecting with Holly’s emotions and feelings. So I deem it gender-blind, unless you’re a hard-headed gorilla juice head who hangs out at Karma in Seaside Heights.

While I had wanted the album to be more folk and traditional, and to reflect the acoustic videos and shows she performs with just her guitar and occasional harmony from friend or family member, producer Beau Trembly knew better than me on what these songs needed. With the solid bedrock of her strum and unique vocal aesthesia, he added multiple shots of B-12 in the form of electricity, percussion, sonic landscaping and an indie-rock vibe that makes perfect sense. No, this is not folk nor Americana nor coffee house singer-songwriter hippie music. Not bluegrass nor country. It’s simply a great album from deep inside the heart of young woman who I admire dearly and encourage, and who I hope will walk the path. As I often say when I stumble upon someone with talent like Holly, she has the gift.

Holly Pulliam-Whole For You by Easy Ed

So we really didn’t stuff her into that crate, she left on her own. She’s been in Seattle for five or six weeks, has been able to get a job transfer and continue working to pay the bills, she’s already played a few gigs and open mics, found an apartment that she’s painting in pastels, is adjusting to the drastic lifestyle change of being single and in a new city, and allowing herself to feel just a little bit sorry for herself albeit those times seem to be lessening with each sunrise. And she’s already written a few new songs that she posted on Reverb Nation that I believe are among her best yet. So people of Seattle…if you could do me a favor and look out for her, maybe offer a helping hand and embrace her into the music scene, I’d be much obliged.

Like hundreds of other players in the town of rain, flannel, rain, coffee beans and rain, she won’t likely be the one on stage in dirty jeans and baggy thrift shop sweaters. She dresses up in nice skirts and dresses. Likes to do her hair and put on makeup. Wears black tights and boots. So in other words, a non-conformist modern hipster from sunny California who might stand out a bit from the crowd. “I want my style to represent my personality and my art. If I want to be treated better than a garage band singer, I better dress better than one.” The girl is grounded. The girl has hope. The girl has dreams. The girl posts really funny things on her Facebook page. And the girl has just the perfect plan: “I’m going to get my shit together, meet boys and play shows.”

Sounds about right to me.

Holly’s website
Holly’s ReverbNation page with music and free downloads
Holly’s video of Justin Bieber’s “Baby”.
A video from The Moose Boys: brother Scott (on the left) and his partner Chris Bidwell.
Katy and Tommy Pulliam’s You Tube sensation “The Hipster Song”

And just one more Ashlee and Holly duet for the road: 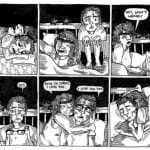 Feel weary and need some rest?