Rooted in the Blues: Boo Hanks and Dom Flemons at The Hamilton 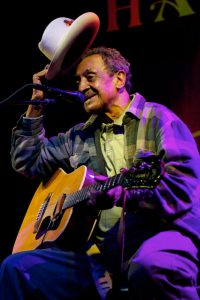 I asked Boo Hanks to sign the photograph, and then watched as he took up the pen.  Each letter of his name was slowly and carefully formed; the “B” and “H” stand ramrod straight.  There are no flourishes, no vanity swirls.  Like the man, his signature speaks a plain, straightforward language.

James Arthur “Boo” Hanks was born and raised in Virginia, just over the North Carolina line.  For the majority of his eighty-four years he has been a laborer, working the tobacco fields.  Boo learned to play guitar from his father, singing traditional roots music in the Piedmont blues style.  Until recently his performances have been limited to his southern home base and shared with family and friends.  It is only during his elder years that Hanks’ music career has blossomed.

His first album, Pickin’ Low Cotton, was recorded at the age of seventy-nine by the Music Maker Relief Foundation, a non-profit organization that supports the traditional music and musicians of the South.  It was at the Music Maker offices that Boo was introduced to Dom Flemons, co-founder of theCarolina Chocolate Drops.  The two quickly developed a musical understanding that led to the recently released album Buffalo Junction with Boo on vocals and guitar, and Dom on back-up vocals and instrumentals (guitar, harmonica, hambone and jug).

Now on tour, the pair appeared last Sunday evening at The Hamilton in Washington, D.C. where a receptive audience was charmed by Hanks’ stories and music.  Boo asked the crowd if we knew what cotton was.  We smiled and said “yes”, but on reflection, most of us don’t really know what cotton is.  We know the polished fabric that lays softly against the skin, the cotton that has to be removed from the dryer before the garment shrinks.  Boo knows the cotton that is picked by hand from the field.  He remembers when the picker was paid a half penny per pound, and when that rate rose to a penny per pound.  Most days it was near impossible to earn a dollar.

Boo remembers raising eight children, seven girls and one boy on the produce from his garden.  Poor, yes, but nobody went hungry and when the day’s work was done, the guitar came out to play.  He’d play the blues, music that Boo describes as “hard knocks, disappointment and mistreatment”.  Hanks confirms that he’s lived through hard times; he knows disappointment well and he’s been mistreated.  The only happiness in the blues, says Hanks, comes from the pleasure of playing the music, and he’ll do that until the end.

Boo played a full set on Sunday evening, offering a finger picking style of guitar play and upbeat vocal delivery that has been compared to the legendary Blind Boy Fuller.  Fourth finger extended and braced against the guitar body, Boo picked primarily with the first three fingers of his right hand.  He sang with expression and with humor, dropping the occasional word or verse, adding a few he liked better.

His play was enhanced by support from Dom Flemons on guitar and on jug.  The mutual respect of one generation for another and one musician for the other was clear throughout the evening.  Flemons watched intently as Hanks picked “Truckin’ My Blues Away”, adding notes where appropriate.  Throughout the show, Dom encouraged stories from his stage partner, and applause from the audience.  We learned that Boo came by his first guitar at age twelve, earned through the sale of garden seed packets.  We also learned that, like most performers, Boo responds to an appreciative audience.  Whoops and hollers from the crowd brought a set of four gospel tunes at show’s end, as well as a brief encore.

We also learned that while Hanks’ music is rooted in southern heritage, the musician himself is a modern day man.  When Dom offered a rousing solo performance of “Cindy Gal”, his onstage partner used the short break to advantage.  Boo pulled out his cellphone to check his messages.

The following video clips were recorded during Sunday’s show at The Hamilton.

Boo Hanks on vocals and guitar, Dom Flemons on guitar:  “Truckin My Blues Away”

Dom Flemons on vocals and banjo:  “Your Baby Ain’t Sweet Like Mine”