Robert Earl Keen comes to us in a bus, from a show in Georgia. He walks onstage a few minutes after 8 o’clock wearing a black coat over black pants. The coat’s a little wrinkled in the back, the tie is multi-colored. He’s wearing a hat that’s something less than a cowboy hat, but more than a fedora. Keen looks around as he’s getting ready to play and shows us that grin, signaling that he’s letting all of us come along for the ride, that he might even let us sing along like we were the Tabernacle Choir. He’s done it before in that town, he’ll do it again in another town; but tonight he’s in our town.

Here’s the thing about this little show at Duling Hall in Jackson, Mississippi, on a Sunday night in late March: Robert Earl Keen and his band did not phone it in, not even one little bit. They could have, easily enough. This crowd would have been happy to shout “I ain’t never goin’ back!” during “Gringo Honeymoon,” sing along with “The Road Goes On Forever,” and gone home happy.  Keen and the band have a week to get to Indiana, and you’d guess they’re heading back to Texas first. That’s a long bus ride. The place was full, at $35 a head, and they could have cashed that little check, filled the bus up with diesel, and been on the road in a couple of hours. But they came to play, and play they did.

What makes it work for someone like Robert Earl Keen? How does he keep the same band together for decades, play those same songs, mix in a few new ones, but deliver the lines we’re all looking for — the lines we know — as if he was just making them up on the spot? Outside of Jimmy Buffett, there’s no one else who does it quite the way he does it. Buffett went corporate years ago, but there’s not one thing corporate about Robert Earl Keen, the Texas Troubadour who’s nobody’s whore; a singer who gives us his songs and takes them back just long enough to sing them to us, pausing occasionally to let us shout a line or two, and all the while, there’s that grin. That shit-eatin’ grin.

The Jackson show opened with “Feelin’ Good Again,” a song that sums up what it must be like to emerge from the blackness of depression only to realize that life is actually good, better than you hoped. The action in the song plays out in a bar that’s the Texas version of Cheers. And, as he sang that song Sunday night, folks in Duling Hall were like, well, here’s dessert right at the beginning of the meal. Where do we go from here? There’s only one place you can go from there, and it’s across the Rio Grande, then into that little town on rented donkeys. “Gringo Honeymoon” it is, and that’s exactly what it was — a honeymoon for all of us, and Captain Robert Earl was our guide.

Keen told us that he tried to find one of his songs with a Mississippi reference so that he could sing it for us, and finally came up with one. I was stumped myself, but I’m sure a few in the crowd figured it out before he started in on “I Gotta Go.” The hero of this song was in an orphanage west of Tupelo (I should’ve know that!) before he headed off to Memphis. So, the Mississippi thing is done and dusted, right? Not so fast, friends. Not so fast. More on this later.

When you release an album, you tour on that album. You play the songs from it whether anybody knows them or likes them. That’s a rule. Unless you’re Robert Earl Keen, of course. Happy Prisoner, Keen’s new bluegrass record, has been out for just a few weeks, so Keen tells us about it while pointing out that the band isn’t set up for bluegrass tonight. So here’s one song from the record, I hope you’ll buy it. They play “99 Years for One Dark Day,” and Rich Brotherton kills on a solo or two, and that’s the end of the album promotion. Happy Prisoner will probably win a Grammy or an Americana Music Award, no need to push it too much. Let’s move on to something else.

Something else in this case would be “The Front Porch Song.” At the point in the song where Keen gets to tell a story, he tells several. One of the stories involves Keen and one of his buddies singing Tammy Wynette songs late at night in slinky dresses they kept in a closet back in their A&M days, and that’s a pretty funny story. But the one that resonates is how he came to know his friend Lyle Lovett. Lovett would come around while Keen and the guys were playing their songs on Church Street and make favorable comments about their playing. Lovett eventually says that he plays guitar, too, and one of the guys hands Lovett a guitar as a challenge – let’s see what you’ve got, and of course he plays something amazing. The response is basically, “This guy’s a smartass.”  Keen plays his initial version of “The Front Porch Song”. Lovett comes back a few days later and he’s finished it. Lovett plays it for him, then asks, is this the song you played for me? Keen says, no, that song [you just played] is beautiful. Then, to demonstrate, Keen finishes singing the song and that last verse is so good you can almost picture them on the porch together. Keen’s a bull, my friends, and his work is never done.

Then it’s “Mariano”, probably the only song he played all night that wasn’t better than the album version, but it still sounded great. “I Wonder Where My Baby Is Tonight” comes next, then Keen and the guys hit it completely out of the park with “The Dark Side of the World”. The harmonies work just right, but it’s so sad. This is not a song to hear a day or two after she leaves you unless you’re ready to jump off a bridge.

Keen says he’ll play us a sad one next, but he’s just joking. We get “The Five Pound Bass,” then “Merry Christmas From the Family,” and then “Ready for Confetti.” Our spirits are lifted, and the lovelorn come off suicide watch. As I’m listening to this run of songs I’m wondering if there’s a chance he’ll do “Amarillo Highway,” and there it is, just like the girlfriend in “Feelin’ Good Again,” except she’s asleep in the backseat in her bare feet. Just what I hoped for, delivered. I checked my pocket but I didn’t find three twenties and a ten, but that’s okay, Keen’s cover of this Texas classic was enough.

We went to “Corpus Christi Bay”, then Keen treated us to a cover of Todd Snider’s “Play a Train Song,” then back to one of his, “I’ll Be Here For You.” Keen told us that he was hired to play for a hospital after this song came out, and when he got there they had the lyrics printed on t-shirts. He was supposed to play the song, of course. Only problem was that he didn’t know it. So he got a band member to stand so that he could read the lyrics off his t-shirt. “If I get sick I don’t think I’ll go to that hospital.”

The evening is coming to a close, so we get to help out on “The Road Goes On Forever,” Yes, the party does have to end, and this is a great way to do it. The choir is back at it, and Keen is up there, part troubadour, part conductor, all entertainer. And we’re in heaven. He leaves the stage, and the crowd chants “Robert Earl Keen, Robert Earl Keen,” over and over, until he returns.

“I’m Coming Home” is the song he sings to us on encore. I’m watching him closely as he sings this one, and it seems like the grin fades a little, his eyes seem a little sad. Going home is a good thing for anybody working on the road, and let’s face it, Jackson is great, but it ain’t Santa Cruz by any stretch of the imagination.  So we prepare to let him go home. But Keen isn’t quite finished. He starts talking about Jesse Winchester, the great songwriter who died just less than a year ago.  Then Keen and the band crank up “Mississippi, You’re On My Mind.”  Some of us knew it when he started, but by the chorus, everyone was in on it. Keen had given us a gift, a beautiful gift, a Misssissippi gift, personally delivered. And we were happy on this night. It is good to be feeling good again. Thank you, Mr. Keen. 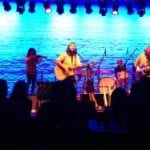