Richmond Fontaine and the Voodoo Pillars

“Is that the one about the dead hooker?” It was a question from the crowd for Richmond Fontaine’s Willy Vlautin as he introduced the next song. It may have been a sincere request for clarification; however, in all probability, the question was referring to the not so happy-go-lucky tenor of Vlautin’s song writing.

It was first night of Cathedral Quarter Arts Festival in Belfast’s Voodoo Bar, and one of Richmond Fontaine’s final gigs in the 20+ years they’ve been playing together as a band. (A farewell tour takes place in Autumn). The Zombies were playing in the main festival tent, the one with all the stars on its soft ceiling. In Voodoo however, a following had gathered to witness the quiet giants of alt/country rock for the last time. In Voodoo we made do with sticky floor.

Fernando Viciconte, another legend from the Portland scene that Richmond Fontaine emerged from, was on stage before them, ably supported by Fontaine’s Dan Eccles. Viciconte wasn’t well, in fact all but one of the touring companions had been stricken with some sort of virus. Or disease. None of this seemed to be impacting on his voice though. Clear, seemingly faultless, he started with “White Trees” from last year’s Turn The Radio On album. The song is a heartfelt comment on where religion has left him, and a poignant enough point for a Belfast audience.

Eccles’ smooth waving guitar filled it out, took away the hard edges. Then “Como Sueno” from his 1998 Spanish language album Pacoima was another from the guts – a song about the junta in Argentina that imprisoned his aunt, and that his family had to flee. It ran on into “The Dogs”, or at least Viciconte did. The start of the song was solely the writer himself, and his guitar. Eccles meanwhile stood with his hands perched on the side of his slung guitar almost like he was holding his braces. Eyes closed, head nodding intermittently with the song. Then he started playing and as Viciconte’s voice was clear with the last traces of salt diluting in the sound, Eccles face moved with the song.

I was to the left of stage by the speakers, I could hear nothing apart from Viciconte and Eccles. With just the two of them performing it was of course more intimate, less volume to cover the distance. There were however people at the front who talked through the gig to the extent that the men on stage asked on a number of occassions for the monitor to be turned up. It is embarrassing to be told that by a musician – but the rest of the room was listening, soaking it all up. 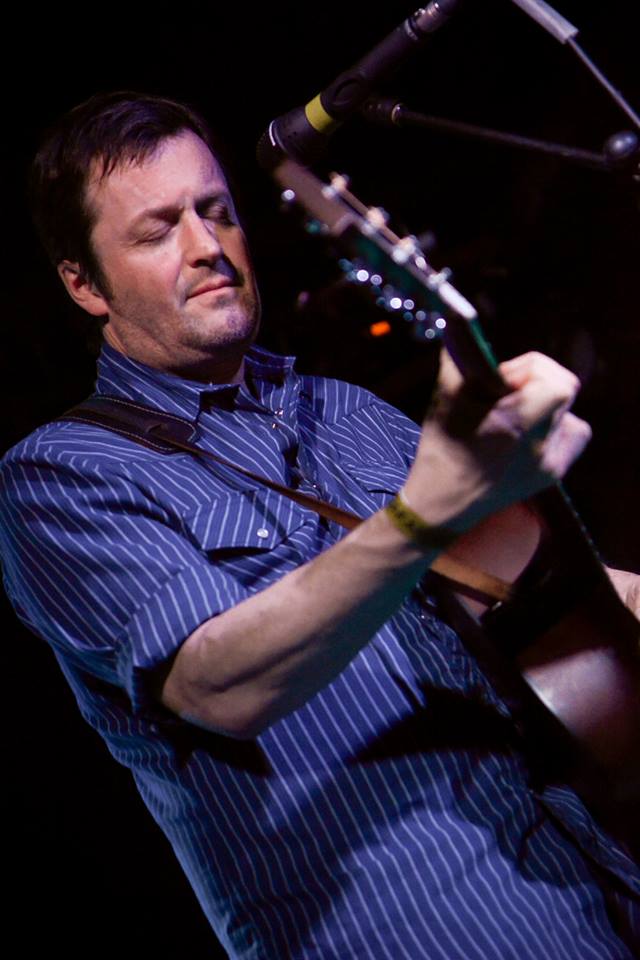 After a while of secreting myself beside the speakers with Viciconte and Eccles on stage I sussed this was doable, it wasn’t going to bust my ears or drill into the rhythm of my heartbeat, so I stashed my coat in the corner and relaxed. Richmond Fontaine opened up with “Wake Up Ray” from their recent (and final) album You Can’t Go Back If There’s Nothing To Go Back To, and even with the drums and the bass and the two guitars it became clear that Voodoo’s speaker pillar wasn’t going to bust my chops.

When Vlautin told the room “this is a song called “Connie” he was greeted with cheers. He smiled. “I like you guys” and the band kicked in. As the song progressed, Sean Oldham’s drums scratched like electrical interference, and as the band repeated “Connie” Freddy Trujillo on bass would step out into view from behind the speakers and harmonise. When the harmonies were done he’d step back.

“Can you turn the lights down just a hair” Vlautin asked out to the distance. “We’re like old strippers, we always look better with the lights down,” and from that point the banter kicked in. It also became obvious that as the songs became louder the wall of sound issue that I thought I had avoided, kicked in too.

It started with the superb “Hallway” as they rocked on the guitars and Oldham’s drums matched up.  Then there was “43” and ”Lost In The Trees”. It had come to pass that beside the speakers was no longer the handy corner it had originally been. Still, the band made up for it. After an epic “Willamette”, Vlautin thanked us and they skipped out to the side of the stage to hang about for a while before the encore.

For the encore, “I Can’t Black Out If I Wake Up And Remember” offered us some Richmond Fontaine signature drawling strums and many finely detailed images. Here, Vlautin recalled people, moments, feelings; and as he described the memory of his mother regularly standing outside her office smoking, “dressed up and worried,” not a spare word was used. It was a seemingly effortless throwaway sentence that painted in HD a situation, an atmosphere, a childhood of lessons. That’s the gift of Willy Vlautin, and the engine of Richmond Fontaine, bringing it to Belfast one last time.