At 83, Ramblin’ Jack Elliott might be shrinking a tad. There didn’t seem to be too much there, under the long, gray curls, the big cowboy hat, and the sturdy old guitar, this Friday night. Ah, but that leaves the timeless charm, the cavernous memory, and the storytelling way with songs, not to mention the twisting tales between them. All that still oozes at a steady, impressible rate, like Vesuvius set on medium flow. Truth is, the man’s physical bearing still radiates smart charisma in a sly smile, a mock-heroic pose, and a face that vividly collapses into a lifetime of memories and feelings.

He opened with what sounded like a secularized rendition of the old, dark spiritual “Nearer,  My God, to Thee.” After the applause he muttered, “You’re not supposed to clap at that.”

So, with that, a packed house embarked on a mine-filled journey, even if at times the anecdotal tributaries seemed to outrun the songs. Following-him-where-he-may-go is a big part of the appeal and adventure of a Ramblin’ Jack Elliott performance.

Through his long career, Ramblin’ Jack Elliott has traveled far in song, story, and distance. As an audience, you encounter moments like when he stopped smack in the middle of a song line — ostensibly, to talk about the song — but then led us on a picaresque journey, the song unfinished. Maybe on his next time through.

He told about being on the road in 1954 with a 20-years-elder Woody Guthrie, stopping in Woody’s hometown of Kansas City, where Woody ironically got abused by someone who recognized him, while Jack slept in the car. But the young Elliott was blessed, he claims. “I didn’t have pimples as a teenager. Back then I did everything backwards.”

We heard the tangled tale about the rodeo clown who gave him his first cigar for 55 cents, and somehow persuaded him to go back to high school, and then college, which he got partly through. Yet Jack roundaboutly ended up in “a stolen whale ship boat going down the Thames River.”

Or there was the Guthrie naval story about his ship being torpedoed by German U-boats, but Woody manages to save his slogan-branded guitar and his fiddle. That did lead logically to Guthrie’s song “Talking Sailor”:

This convoy’s the biggest I ever did see
it stretches all the way out across the Sea…
Look out, you Fascists!
I’m just one of the merchant crew
I belong to the union called the N.M.R.
I’m union man from head to toe
I’m USA and CIO
fighting out here on the waters
to win some freedom on the land.

Such unvarnished Guthrie politics feel anachronistic in an era where union power seems perpetually under the capitalist boot. And Elliott, virtually a pure song interpreter, seems out of step, too, when every person with a guitar and two lungs today seems also a self-proclaimed “songwriter.”

Do we ever need a guy like Ramblin’ Jack, who seems to have most of America’s folk song history in the tattered backpack of his brain? This crowd waited for each transporting turn though time. We heard the old Roy Acuff train song in which, before starting in the wrong key, Jack finally hit the track and his careening falsetto caught the train’s long, lonesome whistle, like a bird soaring into a slipstream.

Besides his set break, Elliott turned the mic over for one song  to compatriat Tim Grimm, a singer-songwriter who serves as a driver for Elliott due to his regard for the storied folksinger. The song, “King of the Folksinger” a recent folk radio hit, mythologizes the storied troubadour. First, though, Grimm fiddled with Jack’s instrument for a moment, then asked him, “Do you ever tune this guitar?” From a spot near the men’s room door, Jack demurred, “It was in tune when I bought it.”

Of course, Elliott’s musical meanderings inevitably led to Bob Dylan, whom he once influenced, and who, after hearing Jack perform Dylan’s “Don’t Think Twice, It’s All Right,” said, “I’m relinquishing the song to you, Jack.” So Elliott did it in the voices of several different people – slipping in and out of nasal mimics of Dylan at pointed spots in the trademark song of sullied romance. He also flipped to Dylan’s bright side, with a pulsing version “I’ll Be Your Baby Tonight.” 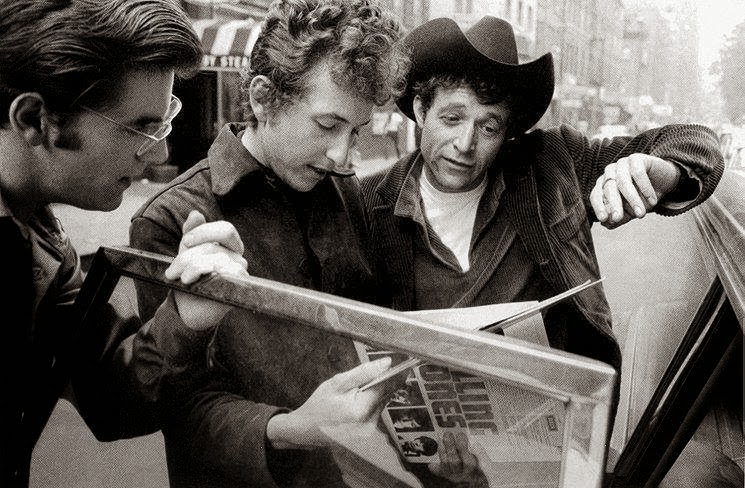 By contrast, his riveting rendition of Merle Travis’ classic mining song “Dark as a Dungeon” proved even more harrowing than his recording of it with Guy Clark — here a focused mini-opera with noir-ish shades of fear, blackness, rain, and measured nuance.

Elliott’s career has been too shambling to ever court commercial success. But, eventually, he gained recognition, from Dylan’s recollections in his biographical book Chronicles, to a Grammy Award for Best Traditional Folk Album in 1995 for South Coast. He received the National Medal of the Arts in 1998, and another Gramm, for Best Traditional Blues Album, in 2009 for A Stranger Here.

Through it all at Shank Hall, Elliott’s guitar playing still bounced and crackled just enough to keep each song moving smartly. Of course, there was always another story to subvert his own music-making. “Did you hear about the time I landed the space shuttle in Dakar?” he asked the crowd. “They said it was a perfect three-point landing.”

Then, after a calculated pause, he added, “I wish I’d known you then. I could’ve invited you onto it.”

By then, he had the crowd almost in synch with his unpredictable stride, so it didn’t matter that he’d clearly crossed the line into fabrication. We were ready to follow him anywhere. Even time seems to wait to hitch a ride with Ramblin’ Jack Elliott.

Ramble on, Jack Elliott. Hope to see you back this way again some time. 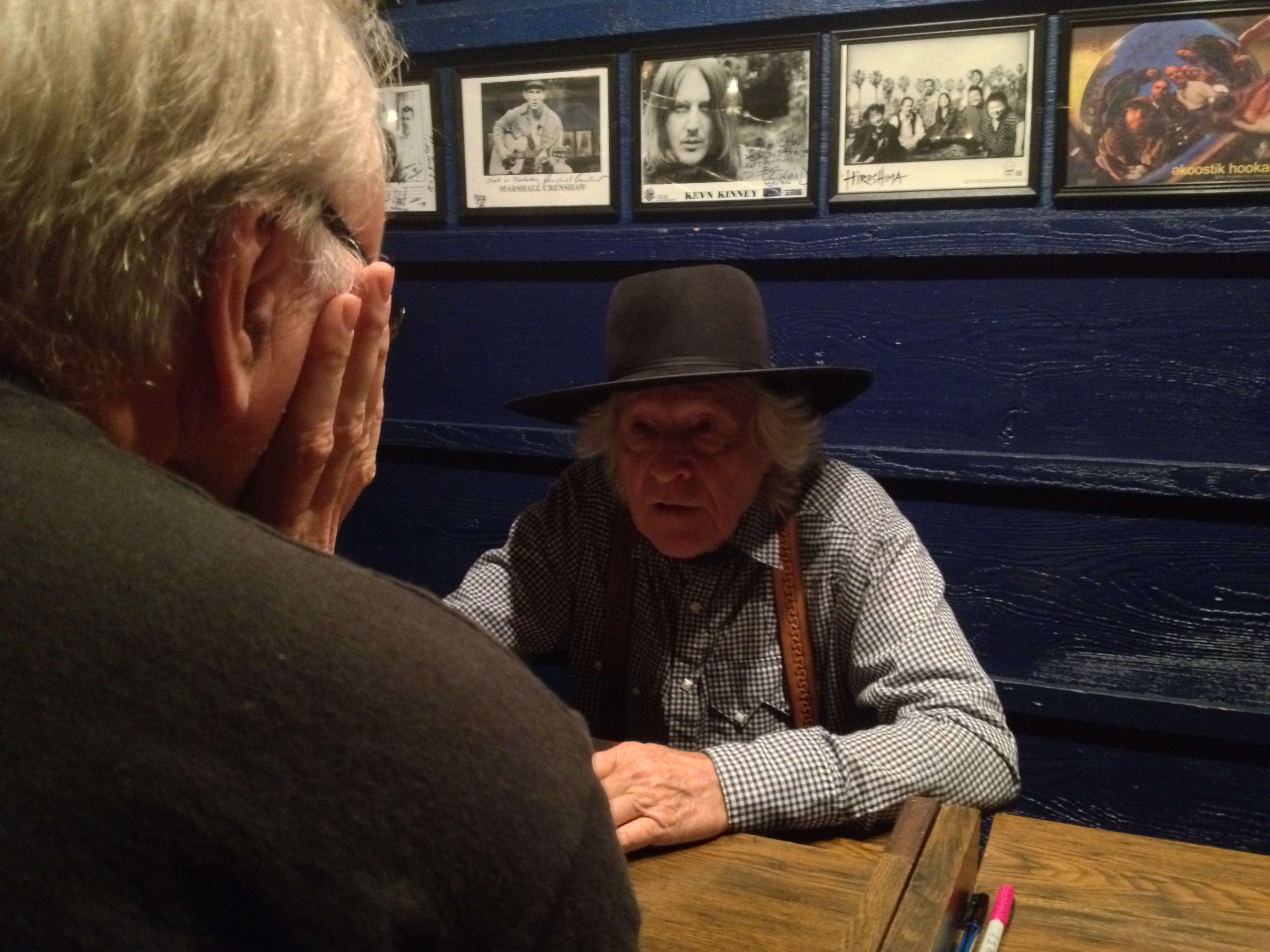 Irrepressible Ramblin’ Jack Elliott even had stories to tell for a number of fans waiting in line for him after a recent performance at Shank Hall in Milwaukee. Photo by Ann K. Peterson

This review was originally published in Culture Currents (Vernaculars Speak).