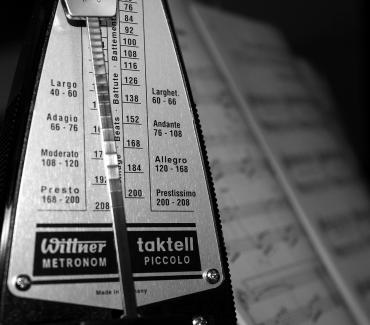 In my last column, I mentioned that one of the things I was most looking forward to about my upcoming months off the road was practicing music. It’s difficult, bordering on impossible, to maintain a serious practice routine on tour, and one of the best things about coming home is finding the dedicated space and time to work on improving my instrumental skills. I imagine that a fair number of No Depression readers also play instruments (the number of fans who are also musicians is one of my favorite things about the roots music world), so I thought it might be of interest for me to offer some thoughts on developing a practice routine and, maybe most importantly, keeping it interesting.

Among the musicians I’ve talked to about this, practice habits vary widely. Some musicians don’t spend much time on focused practice, and others have rigid routines of many hours per day. And there isn’t as much correlation between “amount practiced” and “quality of playing” as you might expect. As with any skill, it’s not how much you practice that really makes a difference, it’s how well you practice. Targeting specific skills and improving weak spots will get you much further than playing a piece of music over and over again until it’s perfect.

Of course, you also have to be motivated to practice, so ideally you enjoy it somewhat. At the same time, it’s good to remind yourself that practicing isn’t supposed to be the fun part – it will make your playing better in the studio or onstage or in a jam, and that will be the fun part. Kind of a joyless, puritanical attitude, but it’s true! I’ve also found that musicians have widely varying attitudes toward practicing, similar to how people feel about exercise: some genuinely enjoy it, others do it dutifully knowing it’s for their own good, and for others it’s a brutal slog. My attitude varies from day to day, but again, I find that practicing is like exercising: the more I do it, the more I want to do it.

My practicing habits have gone through a few phases throughout my life as a musician: high school, college, post-college slump, and whatever phase I’m in now (low-grade professional success, hopefully). In high school, I was newly serious about music and voraciously learned everything I could get my hands on, often without much structure, although my wonderful fiddle teacher did her best to impose it. In college, my world blew wide open. In an effort to stay afloat among the world-class students in Berklee’s string department, I played so many three-octave scales that I nearly gave myself tendinitis in my second semester. After overcoming that, I learned a lot of music across many different styles, and even though I found it difficult to stick to a practice routine while having so much repertoire to learn and other classwork to do, my playing was improving all the time. I worked so much, though, that when I graduated, I felt fully burnt out. In order to preserve my relationship with my instruments, I took time away from serious practicing, and let myself focus more on developing my band’s sound and playing for fun.

Now, I’ve been feeling ready to return to the serious work of improving my technical proficiency on my instruments. Here are a few things I do during a practice session, on both fiddle and guitar, in addition to the more standard stuff like playing scales and learning new repertoire.

When practicing fiddle, I’ll often begin with long tones. I draw the bow across the string, playing a single note, making the bow stroke last as long as I can while producing a clear, consistent tone. When this gets boring, I’ll put on some mellow, atmospheric music and play long tones along with it. Now I’m adding a vibey drone to a piece of music I like! I’m in the band! This also has the benefit of being a timer for your long tones: You can play a game with yourself, trying to make one bow stroke last a certain number of beats or phrases. This is a good way to isolate the right hand – focusing only on consistency of movement and tone, without worrying about what the left hand is doing.

Speaking of drones, they’re one of my favorite tools to use while practicing. (Not unpiloted aircrafts, but sustained pitches.) I have a series of drone recordings on my phone: six minutes of each of the 12 musical notes, sounding continuously. I use these drones primarily to practice intonation or improvising. Playing scales to a drone can help musicians train their ear; if you play a D major scale while a D note is continuously sounding, you’ll learn to hear the relationship between each note of the scale and the root note (D) and whether the notes are in tune. On the guitar, where the frets mean you don’t have to think about playing in tune, the drone can still be helpful in adding a centering tone to your playing. When improvising with a drone, I improvise slowly and without rhythm, thinking about tone and intonation as well as what I’m playing. It’s a meditative exercise that I sometimes use to warm up when I don’t have much time to practice.

On the less meditative side, it’s a cruel teacher, but the metronome is your friend. I use a metronome to learn new material, gradually increasing the speed, and I also use it to practice improvising, forcing my brain and my hands to communicate quickly so that I can execute my ideas while playing with good time. Sometimes, though, it’s not fun to improvise to just a metronome, so I’ll create backing tracks of myself (usually just on voice memos or GarageBand) looping a groove or chord progression so that I have something more interesting to improvise to. Like I do with a regular metronome, I’ll sometimes increase the speed of my backing track by re-recording it and then playing along again, trying to use the same improvisational ideas at a faster tempo.

In addition to this, of course, I’m always learning new material – usually fiddle tunes these days, but I’m hoping to return to my Berklee methods of transcribing and learning complex solos from some of my favorite players. Learning new vocabulary on my instruments, especially when it’s slightly more difficult than what I would think to play normally, is one of the best ways to improve – it helps both the technical and creative sides, and inspires me to continue finding new ways to express myself on my instruments.

I’m feeling a renewed vigor at the moment to work hard at developing my instrumental skills. One of my favorite things about playing music, as I’ve said before, is that there will never be an end to what I can learn.