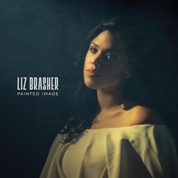 When Liz Brasher’s EP Outcast hit the shelves last year, it introduced us in a bigger way to a soul singer who had a way with words in her songs, who shredded with the best, and who moved easily from the ache of a love song to the exaltation of a soulful gospel song. Her EP gave us a hint of Painted Image in songs such as “Cold Baby” and “Body of Mine,” which appear on her new album. Brasher’s soaring and tender vocals grab you from the first groove of this album, and she never lets you go. She gathers a core group of players around her — bassist Todd Kerstetter and drummer Lee Corum, with Al Gamble adding keys on a few songs.

Painted Image opens with a funked-up gospel-themed song, “Blood of the Lamb,” drenched in horns and propelled by Kerstetter’s bass. The stealthy, slinky sound flows under Brasher’s brassy vocals as she belts out a message of warning (“Would you follow me on down / If I told you / You’d have to lay it all / Down”) and redemption (“I got the blood of the lamb / I left all of my burdens / In the hands of the son”). The song opens with a baptism, a reference to John the Baptizer and to Jesus’ baptism, and then a reference to the narrator’s own experience of seeing the light and being washed in the blood of the lamb, a traditional Christian description of redemption. On the one hand, the song’s prowling, roving sonic structure sounds menacing, but, on the other, it’s a juke-joint song that’s sung as lustily on a Saturday night as it would be in a church the next morning.

The starkly heart-wrenching “Cold Baby” opens quietly, with one bar of the singer’s a cappella pleading “turn me loose,” before the song blossoms into a throaty and full-blown soul anthem. Brasher’s vocals spiral higher and higher here, carrying us out of ourselves; she knows just when to turn up the vocal power and when to turn it tender, and she’s always in control of her phrasing, hitting a note that sends shivers down our spines and then delivering a phrase that tears out our hearts. The song’s ending comes as a surprise, but not before she’s left us wanting the song never to end.

“Living Water” pulls us along with an infectious ’60s pop rhythm, celebrating love, life, and hope. Gamble’s organ plays call and response with Brasher’s guitar and vocals in this jumping, hand-clapping gospel song. The album’s title track echoes down a sonic chamber of layered vocals, guitar, and cello. The imagistic music mimics the painterly poetry of the lyrics: “I tried to change the colors in my mind / But I bled red and I couldn’t pass the time / All is black and white except that I’m / A painted image.”

Painted Image is one of those albums that should be played over and over; each listen reveals the nuances of Brasher’s songwriting and transports us with Brasher’s transcendent vocals.